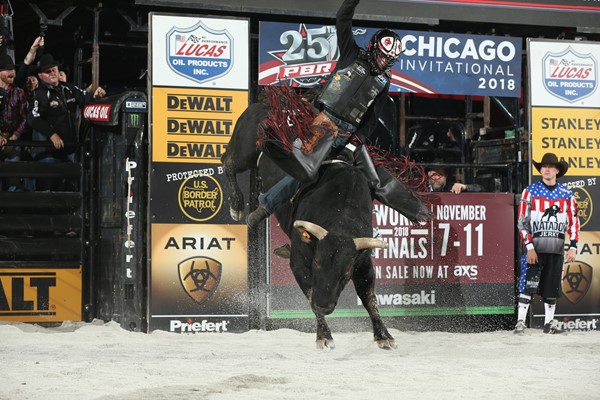 OKLAHOMA CITY – For the second consecutive week, the Canadian duo of Dakota Buttar and Brock Radford will make the trek south to compete on the elite 25th PBR: Unleash The Beast, as the tour travels to Oklahoma City for the Express Employment Professionals Invitational.

Kindersley, Saskatchewan’s Buttar leads the duo currently ranked No. 13 in the world.

After finishing thirteenth in New York City at the Monster Energy Buck Off at the Garden, the 25-year-old continued his winning momentum last weekend in Chicago for the second event of the 2018 season, tying for seventh.

Buttar got off to a hot start at the Chicago Invitational covering Acting Crazy for 86.75 points in Round 1 to finish third.

He then made the 8 aboard Dream Catcher for 86 points, tying for fourth in the second round, and lead the event aggregated heading into the Championship Round.

The fast-rising Canuck, however, wasn’t able to challenge for the event win, after he was sidelined by a sprained neck and concussion sustained when he dismounted in the second round.

Despite not competing in the event’s final round, Buttar’s seventh place effort earned him $5,225 and 105 world points.

In the Sooner State, Buttar has drawn 01 Cattle Co / Robbie Schroeder’s Jokers Wild in the first round as he’ll look to extend his two out ride streak.

For De Winton, Alberta’s Radford, last weekend marked his first event back on the elite tour since last September’s Buck Off the Island in Uniondale, New York. It was there the 22-year-old experience his career-high finish, ending the event 12th, despite doctoring out of the Championship Round due to a virus.

At his 2018 elite tour debut in the Windy City, Radford wasn’t able to continue the momentum he generated at his last event, bucking off both his first and second round draws, narrowly missing the whistle in both outs.

In Round 1, Radford took Livin’ Large to the 6.9-second mark while lasting slightly longer, 7.32 seconds, aboard Call The Law in Round 2.

A new matchup for Radford, he will face Hot Time of K-C Bucking Bulls/Bull Creek Bucking Bulls during Round 1 in Oklahoma City.

In the bullpen, Blue Stone, raised by the Flying High Rodeo Co. of Elnora, Alberta, makes his debut under D&H Cattle Co. in Round 2. Canadian Mist from Nansen Vold, now with Hart Cattle Co., bucks in the Championship Round.

The 25th PBR: Unleash The Beast Express Employment Professionals Invitational gets underway with Round 1 on Saturday, January 20th at 6:45 p.m. CT, followed by Round 2 and the Championship Round on Sunday, January 21st at 1:45 p.m. CT.