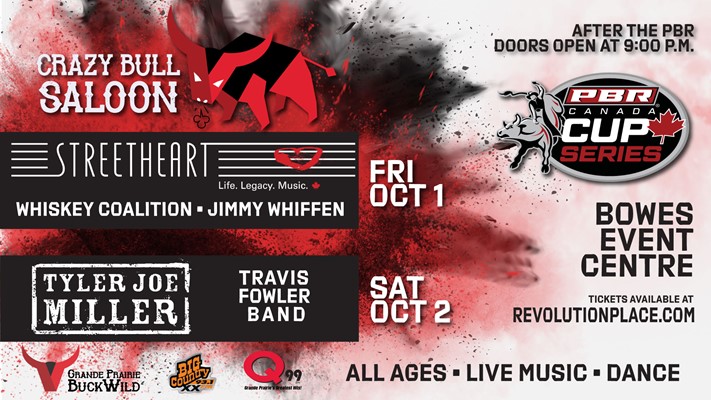 GRANDE PRAIRIE, Alta. – Ahead of the elite PBR (Professional Bull Riders) Canada Cup Series’ return to Grande Prairie, Alberta, and Revolution Place, Oct. 1-2, the official PBR After Party for the Grande Prairie Buckwild has been announced, transforming the Bowes Event Centre into the Crazy Bull Saloon nightly at 9:00 p.m. MDT.

Following the heart-pounding PBR action inside Revolution Place, the Bowes Event Centre will transform into the Crazy Bull Saloon, the post-event hub welcoming fans for a night of music and dancing. Table seating will be available on a first come-first serve basis, and food and beverage will also be available for purchase.

For the first night of festivities at Crazy Bull Saloon, the complete Friday lineup of performers will include Jimmy Whiffen, Streetheart and Whiskey Coalition.

After local favorite Whiffen, known for his classic rock covers, opens the evening, he will be followed by legendary Canadian rock band Streetheart, featuring founding members Daryl Gutheil and Ken “Spider” Sinnaeve, along with Jeff Neill and Paul McNair.

Having risen to fame for their chart-topping hits from the 80s and 90s, such as “Under My Thumb,” and “Here Comes the Night,” Streetheart has toured with the likes of AC/DC, Sammy Hagar, Styx, Kansas and Blue Öyster Cult.

Grande Prairie’s own Whiskey Coalition will then punctuate the raucous evening, bringing the night to a climactic end with their party rock tunes.

Canadian singer-songwriter Miller was notably the first independent artist to debut with back-to-back No. 1 hits on the Billboard Canada Country chart with “Pillow Talkin’” and “I Would Be Over Me Too.”

Scheduled to both open and close the PBR After Party on Saturday, October 2, The Travis Fowler Band, led by front man Travis Fowler, is one of Grande Prairie’s hottest country music acts, playing party country favorites.

While Fowler will open the evening as a solo artist, he will be joined by his complete band to conclude the party.

The PBR After Party tickets are available for purchase online at RevolutionPlace.com, or as an add-on option while purchasing a ticket to the PBR Grande Prairie Buckwild.