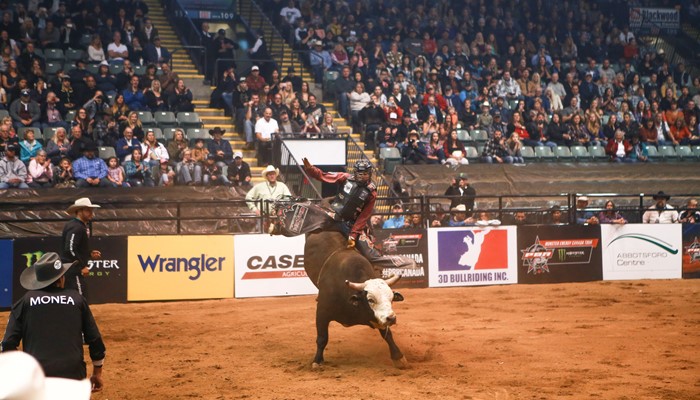 Cody Coverchuk, from Meadow Lake, SK is as determined as ever to get to the PBR World Finals.

Collecting points and cheques more often than not along the PBR Monster Energy Canada Tour has been standard for Coverchuk, and seeing his stock rise in the standings the past few years gives the 22-year-old a ton of motivation to work towards the World Finals.

“For the last few years I've watched myself climb the World Standings by just going to the Canadian events. In 2016 I have been branching out and going to BlueDEF events down south and really pushing myself to to get inside the top 35 to qualify for the PBR World Finals,” said Coverchuk. “It's the best bull riders in the world and the best bulls and that's where I want to be. Not to mention the $250,000 pay out to the winner of the World Finals.”

With only a few PBR sanctioned events left before the BlueDEF and Built Ford Tough Series World Finals, Coverchuk knows the math at hand. He is about 140 points out of the 35th and final spot to get the automatic invite to the PBR World Finals. With more than 140 points up for grabs at two BlueDEF events in the next two weeks, and 80 to be won in Saskatoon, Coverchuk has a hill to climb.

With 20 points, but suffering an upper-body injury in a wreck in Abbotsford Saturday night, the Saskatchewan cowboy will be looking to the pens and hoping for those perfect draws come Saskatoon. Coverchuk knows the quality of animals competing in Canada is second to none.

“I try not to because it doesn't matter which bull you draw you still have to ride him to get the buckle, especially in the PBR. All 10 bulls guaranteed to be buckers if they are in the short round,” said Coverchuk. “There is one bull that does come to mind that I have some unfinished business with, 111 Black Rose from Prescott and Vold. He has bucked me off twice now in the short round at these PBR Monster Energy Canada Tour events and has cost me two separate event titles so I wouldn't mind getting a little revenge on him.”

With Ty Pozzobon and Dakota Buttar ahead in the standings, Coverchuk still wants to push to be the best he can possibly be heading into the offseason.

“All it’s going to take is riding more short round bulls than I have been lately. Nothing changes as far my mind set goes, I like to keep my mind on the task at hand. As bull riders our job is to ride the bull that we draw for eight seconds, it's that simple.”

Coverchuk will be spending the week healing up before making the decision whether or not to head south for the BlueDEF event in Trenton, New Jersey, before heading off to the final stop of the PBR Monster Energy Canada Tour in Saskatoon.