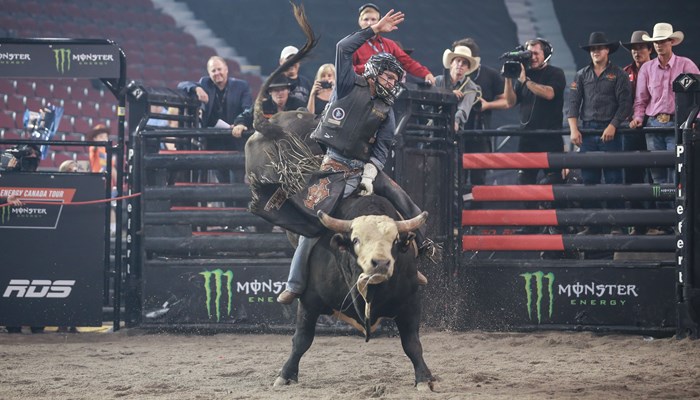 The PBR Monster Energy Canada Tour is well underway, and if there is one guy making his presence known, it is Wacey Finkbeiner.

The 23-year-old Ponoka cowboy is sitting 52nd in the PBR World Standings on the back of two event wins and more than a handful of top ten finishes. With the first event in Ottawa out of the way, where he finished fourth getting bucked down in the short-go round, he is setting his goals wisely.

Calling this year a breakout year would be an understatement for the 5-year-pro, as a lot of his focus previously has been on the rodeo end of bull riding. But with the format and opportunity on the this tour, Finkbeiner has his eyes set on the PBR World Finals.

“I have a few different goals for this tour. There are so many goals to be made. Not only points towards the Canadian standings but also the World Standings. I hope to capitalize at these big events in Canada and keep climbing the standings and give myself a serious chance at being on top in Canada after the last event of the tour in Saskatoon,” Finkbeiner said.

The tour is absolutely the biggest and best infusion of interest and support the sport has seen in Canada in a number of years, and the hype was well worth the wait Finkbeiner said, bragging on the amazing fans that turned up for the first stop on Ottawa.

“The fans in Ottawa were second to none. They were a big part of the atmosphere in Ottawa. When the fans are that loud it gets everyone's motor running. I expect the same kind of atmosphere at the rest of the eastern events,” Finkbeiner said.

“These eastern events are pretty cool. I like seeing a different part of the country because before Ottawa I had not been east of Manitoba. I'm excited for the rest of the events out here but I'm looking forward to Calgary and Saskatoon because my family can come watch me. Nothing I like more then having my family and girlfriend at the events cheering me on.“

While the bull riding season winds down with some of the biggest events on the schedule, there is a massive “bubble” of riders who can earn enough points to make it to the PBR World Finals, and its that company he has at these PBR Canada events that makes Finkbeiner ride better.

“The competition at these events is pretty stout. Competing against Canadian Champions and World Finals Qualifiers makes me ride better. Your only as good as your competition and on the Monster Energy Tour there is no shortage of top competitors. There are two guys that have stood out so far and they happen to be the guys I'm chasing in the PBR Canada standings. Ty Pozzobon and Dakota Buttar. These two are dialled in and don't show any signs of slowing down anytime soon.”

Aside from his goals at the end of the season, Finkbeiner has his eye on the Monster Energy Champion's Challenge Bull, 005 Liquid Fire (Wild Hoggs). With a ton of previous experience with the bull, Finkbeiner feels he has the best chance out of anyone to be able to find eight seconds on one of the top bulls in Canada.

“I would love to have a chance at him this weekend in London for $10,000. I've been on him four times over the last two years and have learned something new about him every time I tie my hand to him. Taking what I've learned from my previous attempts on this bucker from Wild Hoggs, I look forward to getting on him and having a chance at coming home with a damn good pay day.”

Stop number two of the PBR Monster Energy Canada Tour in London, ON at Budweiser Gardens on August 27th, 2016 starts at 7:30pm EST. Tickets are available at PBRCanada.com