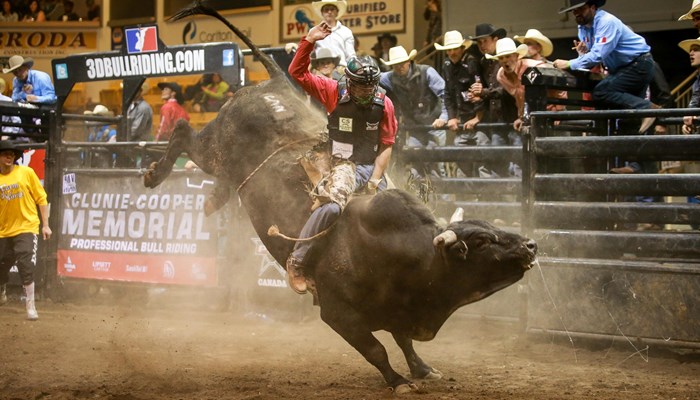 When it comes to the stars of PBR Canada, one cannot overlook the animal athletes.

PBR Canada brings some of the most challenging and gnarly bulls this country has to offer to its events. And one of those bulls will be making it's Monster Energy Canada Tour debut in Ottawa, Ontario tomorrow night at TD Place.

Wild Hoggs’ 005 Liquid Fire is one of the top bulls in Canada, selected to be a part of the PBR World Finals last year, and was named bull of the Ponoka Stampede and the winner of the Calgary Stampede rode him for $100,000.

You may be asking, what makes this bull so rank if guys keep riding him for wins?

“You want to see a big score, or a buck off, these riders like getting on him, that is for sure. They don’t say a lot, they like him. Everybody says they love that bull and I think the love him because he gives you an opportunity to win every time. Guys are feeling good, and take advantage of that, they are going to win a lot of money.”

The difference between a bull who is invited to compete at the PBR World Finals and one that won’t likely see the bright lights of the bigs arenas is that try that is demonstrated by Liquid Fire every time the chute cracks.

This year alone, the three men who have been able to make eight on this six year old bull have pulled 86.5 points (to win third in the BFTS Billings, MT event) and 88 points for the Canadian Rodeo Bull Riding Champion Dakota Buttar in Prince Albert earlier this year and a big 91.5 by Cody Teel to win that $100,000 check in Calgary.

“I think it is his consistency more than anything. He is a big bull, he looks the part, he acts the part in the arena. Chases the bullfighters or the bull rider around a little bit. He is going to bring it every time. When you haul a bull 4,000 km you want to be confident in the bull,” Volz added.

While the sport offers a rider vs. bull face off eight seconds at a time, the families who raise these animals are rooting for both their bulls and the riders alike.

“I wish everybody the best of luck every time they are going to get on him. We get a lot more publicity out of when a guy rides to a great score than we do with buckoffs. I would love to see Scott Schiffner get on him again, he has bucked off him twice. I would like to see Scott come up with a win on him and 90 points. That would be pretty cool,” Volz said.

“We have very few bulls in our pen that can do that (consistently get near 90 points), but Liquid Fire is one that can. I love seeing those big score, I am still a bull rider at heart. I want to see more rides than buckoffs, that is for sure.”

Liquid Fire matches up with the event winner of the PBR Monster Energy Canada Tour kick off in Ottawa, ON on Saturday August 20th in the Monster Energy Champion's Challenge for a $5,000 bonus.