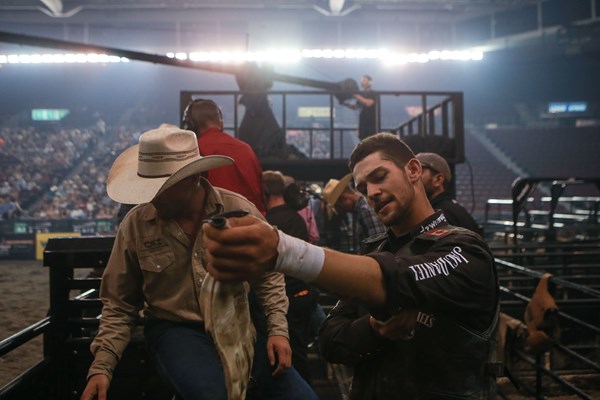 Ty Pozzobon prepares to compete in Ottawa, ON. Photo by Covy Moore.

While the PBR Monster Energy Canada Tour made its second 2016 season stop in London, Ontario, PBR Canada points leader Ty Pozzobon was enjoying the sights, sounds and thrills of an open rodeo event in Australia.

And while that event didn’t go his way, he said taking the PBR Canada event off was made easier knowing that Dakota Buttar, the rider chasing him in the points standings, was called up for his first appearance on the PBR Built Ford Tough Series (BFTS) in Tulsa Oklahoma.

“I have missed more than one event this year, I just got my PBR card in May so I'm really not concerned. I’m just having fun and riding bulls at the moment,” said Pozzobon, who will be returning to the tour for its next stop in Hamilton, ON.

“(Dakota’s) one of the best, and he's a great guy. All the guys who are in the race are badass. It makes it fun. It's just a game in the end, and we can all joke and just have fun. Dakota and I have been talking a lot because I left for the BFTS when I was 19, and I was lucky enough to have a lot of older guys give me advice. I'm excited to see him go down there and kick ass and make a name down south as well. You wait and see, he's going to do big things.”

Despite the incredibly close points race between the two, and a handful of other riders who have been bearing down and hitting the pay window, Pozzy says he is focused on one bull at a time and not concerning himself with the other athletes’ performances..

“I try not to keep my eye on anyone who rides,” Pozzy said. “I just try to focus on the task at hand. In the end it's just you against the bull. This game has so many variables; you just have to ride the wave. This sport has great riders who can win on any given day. You’re best off to just do your job and let the rest take care of it self.”

That strategy has worked for the points leader, who has gained a new level of confidence.

“I have never rode with this type of confidence before. I think it is because I'm not worried about my last ride. Win or lose, there is more to come.”

Having spent a couple days in the nation’s capital two weeks ago, the B.C. cowboy is looking forward to getting back to the enthusiastic fans who have been turning up for the biggest bull riding events Canada has to offer.

“Fans out east are awesome,” Pozzobon said. “It's great to take the PBR out there for them to see, and it is even better for our sport. The sport of bull riding is growing like wildfire and it is awesome to be a part of it.”

“The Eastern fans couldn't be much better. They really get into it and it adds to the atmosphere and pumps us up.”

Hamilton, ON marks the third stop of the 2016 PBR Monster Energy Canada Tour on September 10th at 7:30pm at FirstOntario Centre. Tickets are available at Ticketmaster.