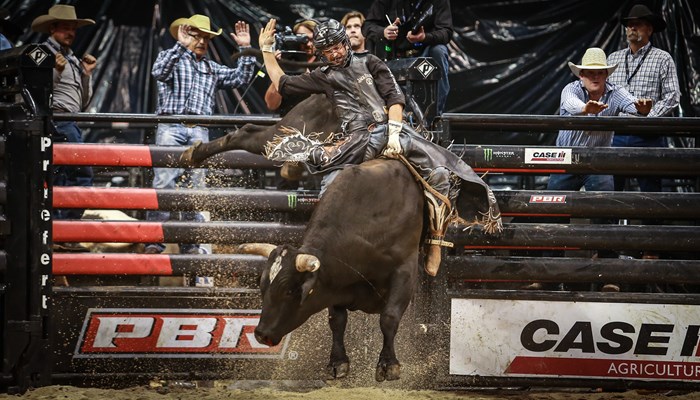 There is a unique aspect to the PBR, in that no matter which country that PBR operates you are earning points in the same standings as Built Ford Tough Series stars like J.B. Mauney or Cooper Davis.

And that is one thing that after getting the call this week to compete at the next PBR Built Ford Tough Series event, PBR Canada points leader Ty Pozzobon is taking to heart.

Pozzy says he has set two goals on the PBR side of things, one being claiming that $25,000 Canadian bonus, and the other is ensuring he is inside the top 35 to qualify for the PBR World Finals in Las Vegas.

“My goals changed half way through the year with my decision to go with the ERA instead of PRCA so I didn't start going to PBR's until May,” Pozzobon said. “My focus wasn't on the BFTS…but I just wanted to focus on Canada. I didn't realize until about August how I was sitting for the World. The world standings kind of snuck up on me with how the summer in Canada was going for me. I am focusing on Canada for now and in the future will be focusing strictly on the World Standings.”

Sitting as the PBR Canada points leader, which works out to 38th in the world standings, Pozzobon knows that a run at the World Title is out of sights simply by mathematics but is determined to be in Vegas this year but not before taking home that $25,000 bonus.

“They kind of both fall hand in hand. I have been to the World Finals three times and alternate for one. I spent most my career focusing down there and don't have the Canadian Title yet. I have won the Canadian Finals but not the title. I'm excited to go back to the BFTS. I finally, at the age of 24 am confident in my ability. I can remember being 20 years old and sitting top three in the World and thinking is this really happening? Now I know my ability and know where I belong. I plan to go after this Canadian Title (in 2017) and then go after a World Title.”

But before any World Finals, or the PBR Monster Energy World Finals Qualifier in a couple of weeks in Saskatoon, Pozzobon is setting his sights on Calgary this weekend.

“Calgary is important for the Canadian standings and that is what my focus is on at this moment,” Pozzobon said.

Ty Pozzobon and the PBR is in Calgary, AB for stop number four of the PBR Monster Energy Canada Tour on Saturday, September 24th at on Stampede Park's Agrium Western Events Centre starting at 7:30pm. Tickets are available at Ticketmaster.