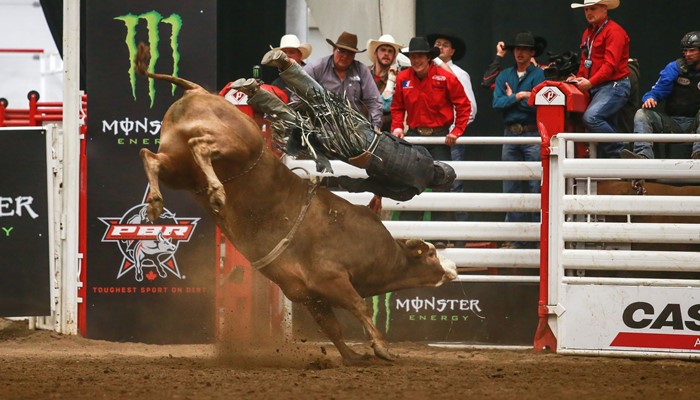 ABBOTSFORD, British Columbia -- Saturday night at the Abbotsford Centre we kick off the month of October and stop number five of the PBR Monster Energy Canada Tour.

Ty Pozzobon continues to lead the charge and improved his lead to over 400 points after a second-consecutive second place finish in Calgary. Dakota Buttar is hot on his heels while Cody Coverchuk is only another 100 points back. All three are here in Abbotsford as Pozzobon has turned down the PBR's top-level Built Ford Tough Series once again despite qualification.

This week I'm going to go a different direction with a couple picks to change things up. With bulls winning more than not on the whole in our sport, I wanted to highlight a few of the top ones to watch in the first round.

Don't forget about the potential $20,000 bounty on VJV Nailed in the Monster Energy Champion's Challenge for the event champion.

Shay Marks vs. 259 Stay Smart - I'm excited to see Shay make his return this weekend. Despite not competing since July, he's still ranked tenth in Canada. Stay Smart is a solid black bull from the Wild Hoggs that Cody Coverchuk took to a long round best 85 in Winnipeg two short weeks ago. Look for Shay to make his way into that final round and ideally be the first Canadian to win a stop on this year's Monster Energy Tour.

Jackson Scott vs. 147 Still Water - Josh Berezay and I are talking about this bull as I'm writing this and he's got to be one of the most under-rated bulls in our country. Still Water bucks every time, doing his job but he stops as soon as he's got his man on the ground. I think Still Water is one of the best examples of a bucking bull and what his job is. Despite still having the flank on, he doesn't buck as soon as the rider is on the ground. Show a video of Still Water to anyone who might not understand bucking bulls and how they hold themselves. Back to the point of this write up though, Jackson Scott has his hands full in his Monster Energy Tour debut. Covy Moore wrote a great story about Jackson on Friday. Ridden only once in 20 outs, it's definitely advantage bull. I would love to see nothing more than Jackson blow the roof off of this place on Saturday.

Brady Oleson vs. 398 Crying Black - Also from the Two Bit firm of Magrath, AB Crying Black has been impressive in four outs so far with no qualified rides. Brady was our PBR Canada Finals Champion in 2015 but we haven't seen him much this season. I hate to do it but I think it's advantage bull here again, especially after putting Matt Triplett on the ground before the eight in Calgary. A score here though could handily win the first round.

yet to be ridden, bucked off Matt the other day in Calgary, big scores on the board

Dakota Buttar vs. 328 Fantastic Genes - Yet to be ridden in three outs, Fantastic Genes is a product of 861 Bucking Fantastic and a Jiminy Genes cow. Uncharacteristically, Buttar has been bucked off six of his last seven bulls in PBR competition and fallen further behind Ty Pozzobon for the number one spot. There's still time to catch up though and I see a couple streak changing no Saturday for the two-time CPRA Champion.

Ty Pozzobon vs. 225 Big Tymer - Ridden in Winnipeg by Gatlin Aebischer of Oklahoma for 85 points to split round one, Big Tymer was actually brought into Canada by Ty himself. Not ridden on record other than that 85, look for Pozzy to go all the way up at the Abbotsford Centre. Usually a right hand spinner, Big Tymer is co-owned by Pozzy and Vold/Prescott and has won money in the ABBI Canada Derby competitions in 2016 as a four year-old.

Zane Lambert vs. 124 Tweedle Dee - A bull purchased from the Scissons family of Central Alberta, Tweedle Dee put up a big bull score in Calgary at the Ranchman's this summer. Only one ride has been recorded based on the stats but I see another one coming up on Saturday. Zane needs some points to get to Saskatoon and this is one opportunity he won't let pass him by.

The following is the draw for the PBR Monster Energy Canada Tour stop in Abbotsford, BC on October 1st, 2016 starting at 7:30pm PST.