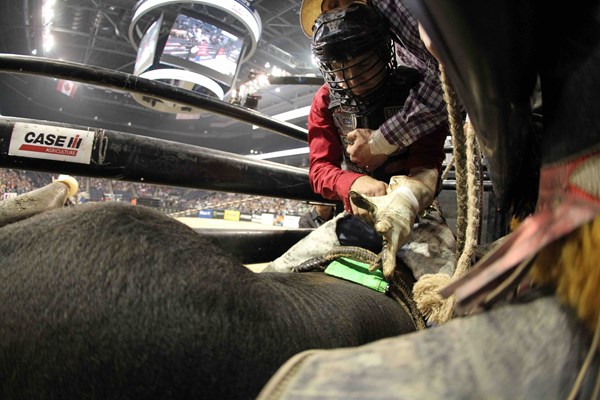 CALGARY, Alberta -- Saturday marks stop number four of the 2016 PBR Monster Energy Canada Tour and through the first three events, a Canadian has yet to win.

I'm thinking with the way things are drawn out here after our kick off party last night at Ranchman's, we could see that trend change.

Since I've been covering the PBR here in Canada, and competing for that matter, I've never seen a title race this close. After Winnipeg, Ty Pozzobon has a 217.6 point edge on Dakota Buttar. Buttar has two Canadian Pro Rodeo titles to his name while Pozzobon has won our finals event before. Ty is looking for a Canadian Championship and right now he's in the driver's seat.

Based on the way things shook down last night, this is what I think is going to happen in round one at the Agrium Western Events Centre.

Zane Lambert vs. 147 Still Water - This is one of the four rematches tonight in Calgary. These two paired up in North Battleford, SK back in July where the bull won the battle. I've got to take a moment here to recognize Josh Berezay of the Two Bit Nation. It's his 50th birthday today and I don't think there's anywhere he would rather be. Still Water is one of the best bulls in his pen with a record of only one qualified ride in 21 outs. This is going to be a tougher one for Zane away from his hand but getting it done will get him another bull in the finals.

Cody Coverchuk vs. 193 Monkey Nuts - For as nice as I've seen Monkey Nuts be before I'm surprised he's only been ridden three times in 16 outs. Nathan Schaper put up an 86 on him in Prince Albert, SK back in May. Coverchuk is third in Canada right now still with a shot at that $25,000 bonus come Saskatoon. So far on the tour he's been riding hot and I expect him to keep up his winning ways tonight.

Matt Triplett vs. 398 Crying Black - Justin Felisko wrote about Matt Triplett's return to the PBR this past week in Winnipeg at PBR.com. Triplett actually got his PBR start in Halifax, NS back in 2011. Since then he's mostly been on tour and even contended for a world title in 2014. Crying Black is another bucker from the Two Bit Nation that's been one to watch this summer. Bull scores of 41, 43 and most recently a 44 against Justin Lloyd in Lashburn have him pitching a shutout to this point. Crying Black went left right in the gate that night, that would be away from Matt's hand. With the air time this bull can get though that should give Matt plenty of time to style him him.

Jared Parsonage vs. 822 Indian Turtle - If you've been watching our broadcasts on TSN you will have heard Scott Byrne talked about the bull he knows very well, and knows his face very well. Indian Turtle has taken riders to scores anywhere from 84 to 88 points. Ridden 11 times in 38 outs, Parsonage should get a score in his debut on the PBR Monster Energy Canada Tour.

The following is the draw for round one of the PBR Monster Energy Canada Tour in Calgary, AB at the Agrium Western Events Centre starting at 7:30pm on September 24th, 2016.

The Professional Bull Riders is in Calgary, AB for stop number four of the PBR Monster Energy Canada Tour on Saturday, September 24th at on Stampede Park's Agrium Western Events Centre starting at 7:30pm. Tickets are available at Ticketmaster.