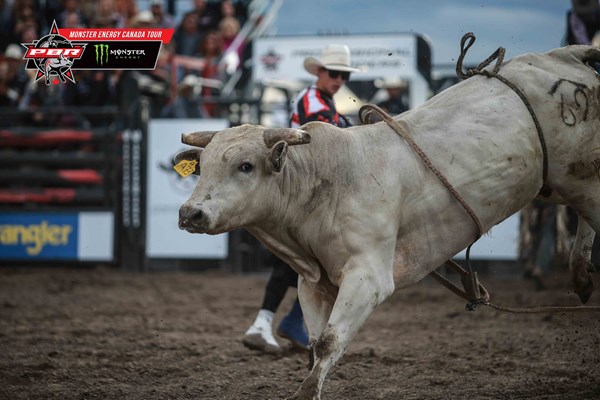 WINNIPEG, Manitoba -- We come into Winnipeg for the third stop of the 2016 PBR Monster Energy Canada Tour with the standings tighter than they have maybe ever been in our country.

Ty Pozzobon leads Dakota Buttar by only 17.6 points and both are on the slate at the MTS Centre for Saturday night but the talent doesn't end there. A last minute replacement has last year's world number five, Matt Triplett of Columbia Falls, MT set to compete.

Winnipeg is another one of our televised stops on TSN and RDS and will broadcast on Wednesday night. There is no live stream so if you want to see any of this competition before then you'll have to buy a ticket and get yourself to the MTS Centre tonight by 7:30pm.

Either way, here's a preview of a few of the feature matchups in round one.

Brock Radford vs. L5 Mouse - Brock put up one of the highlights of the year at stop number two of our tour in London on the back of superstar Minion Stuart. If you haven't seen it yet, Radford gets thrown right over the fence into the stands after a successful 88 point ride. Mouse is a bull from the Skori family, now a part of the Robertson family, that's been ridden six times in 22 attempts. Brock is on a roll already and looking to continue that on in Winnipeg. Look for at least 84 here.

Dakota Buttar vs. +127 Venom - I don't think I"ve seen this bull in person yet but I saw a video of him up against PBR Rookie Jackson Scott in Coronation. Scott won that matchup and I know Buttar will do the same. The Vold/Prescott truck has a new set of bulls here in Winnipeg and throughout the rest of the tour now. Buttar is 40th in the PBR World Standings and could qualify for his first PBR World Finals in the next few weeks if things go his way. If that's the case, we could potentially have three Saskatchewan bull riders there. That hasn't happened before.

Garrett Green vs. 234 Arnie - I like this Wild Hoggs bull. Arnie came from the states but seems to be liking his new home up here. Ty Pozzobon rode him for an 84 in Innisfail back in July. Justin Lloyd covered him last week in Stavely for an 85.5. Garrett hasn't been to any of our Monster Tour events yet but he's still sixth in our PBR Canada Standings. Look for him to be a dark horse working his way to the top in the last few events of the year and get at least an 84 here.

Douglas Duncan vs. 016 Catch me if you can - Douglas is hustling to get back to the PBR World Finals and hitting every event he can currently. A truckload of these guys were in Pendleton, OR this week at a BlueDef event. They are driving all the way over here to get the money and Duncan has drawn well. Catch me if you can has the name of one of the best movies of all time but this bull has been caught two of three times on record so far. Douglas rode two of five but two of three in the first round in Stavely. Look for him to come up big and be a favorite to get the event win tonight.

The following is the draw for the PBR Monster Energy Canada Tour stop in Winnipeg, MB at the MTS Centre on September 17th, 2016.