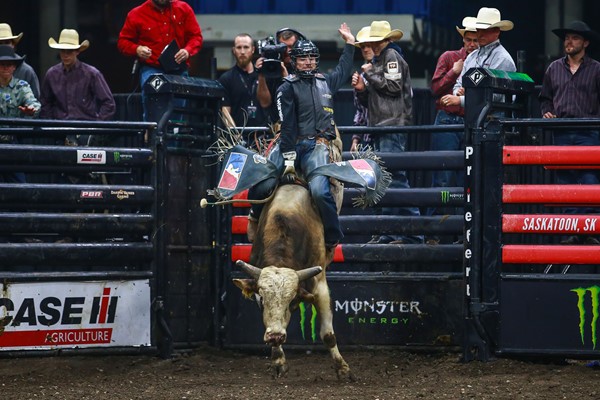 SASKATOON, Saskatchewan -- This weekend PBR Canada’s Monster Energy Tour, presented by Mac’s and Circle K stops in Saskatoon, Saskatchewan at the SaskTel Centre, for the sixth and final event of the nationally-televised, cross-nation tour. The event marks the second-time the tour has visited the Saskatchewan’s largest city. As the PBR Canada Finals, the event is the culmination of a more than 30-event slate of bull ridings from the year. The twelfth annual finals will mark the PBR’s eighth consecutive year hosting the event in Saskatoon.

FIERCEST BATTLE IN HISTORY – This year, the race for the 2017 PBR Canada title has been the fiercest in league history. With 2,000 points up for grab at the two-day finals event in Saskatoon, numerically, 43 riders mathematically have the chance to leave the province of Saskatchewan with the Canadian title. The winner of the hotly contested title will earn a spot at the Real Time Pain Relief Velocity Tour Finals in Las Vegas, Nevada on Oct. 28-30 where they will have the opportunity to earn a bid to the Built Ford Tough World Finals on Nov. 1-5.

SO FAR THIS SEASON – The 2017 Monster Energy Tour opened in Quebec City, Quebec with PBR’s first-ever international Major event. With four riders from the Top 10 on hand to compete, Derek Kolbaba won the event, $34,100 CAD and 300 world points, elevating him to No.3 in the world. Jordan Hansen was the event’s highest finishing Canadian in fourth. The next weekend, the tour visited Ottawa, Ontario for the second time in its history. Cody Casper earned his first-ever PBR victory in Canada’s capital and used his 88-point rider on Captain (Mike Miller/Torres Bros) in the championship round, the high-marked ride of his career, to secure the win. Justin Lloyd was the event’s highest finishing Canadian, placing second, after riding Wild Mexican (Rafter P) for 85 points and the Round 1 win. At the tour’s final eastern event, Lloyd earned his first event win since 2013, becoming the first Canadian to win a Monster Energy Tour event title this season. When the tour resumed in Winnipeg, new father Dakota Louis earned his first event win of 2017 after sweeping both rounds and going a perfect 2-for-2. A Canadian was back in the winner’s circle at the year’s final regular-season event of 2017 in Abbotsford, when Lonnie West went 2-for-2 to win the first event of his career, accomplished by logging the high-marked ride of his PBR career when he rode Anika’s Pet for 89 points.

RED HOT RADFORD – Since August, one man, Brock Radford, has held a firm grip atop the PBR Canada national standings. Backed by an unprecedented four-event win streak at the Touring Pro Division level, Radford not only earned enough Canadian points to climb to the top of the national standings, but also inched inside the Top 35 of the world standings, making his Built Ford Tough Series debut in September in Springfield, Missouri. This weekend in Saskatoon Radford will not only be chasing his first victory on the Monster Energy Tour, but also his first PBR Canada title. Despite his summer win streak, Radford has hit a slump as of late in Canadian competition. When he made the journey to Abbotsford, he had bucked off his last five draws, recording his last qualified ride about Mr. Brightside for 87 points in Stavely, Alberta on September 2. While Radford logged a qualified ride in the first round, scoring 83.5 points on Hollow Point, he bucked off Herf in the championship round at the 7.77-seconnd mark. Still atop the standings, Radford’s sizeable lead over No.2 Lambert has diminished as the 2013 PBR Canada Champion is amidst his own hot streak. Radford now leads Lambert by 379.16 points.

BATTLE FOR NO.1 – With 2,000 Canadian points on the line at this weekend’s PBR Canada Finals, the race for the PBR Canada title remains wide open. While No.1 Brock Radford holds a near 380 point lead over No.2 Zane Lambert, the No.2-No.10 ranked riders are separated by just 709.17 points. Lambert has steadily chipped away at Radford’s lead the last two months, beginning on Sept. 2 in Stavely, Alberta where he both won the event and finished eighth. He then went on to finish second in Magrath, Alberta at the final Touring Pro Division event of the year, and third and second respectively at the Winnipeg and Abbotsford Monster Energy Tour events. His most recent second place effort in Abbotsford came after he rode Boom Beach for 82.50 points in Round 1 and Spot On for 87 points in the championship round. As he seeks his second title, 2013 PBR Canada Champion Lambert is just 379.16 points back from Radford and the top spot.

No.3 Cody Coverchuk, who led the race for a portion of the summer, trails Radford by 711.66 points. He’ll need to reverse his fate from the last few weekends in Saskatoon to claim his first title, having bucked off in both Winnipeg and Abbotsford. No.5Lonnie West enters the event with momentum, having won the first event of his career last weekend in Abbotsford where he rode Tippin Point for 84 points in Round 1 and Anika’s Pet for 89 points in the championship round. The win came after he was second in Winnipeg. The last two weeks, West has climbed from No.14 to No.5 in the standings, positioning himself to capture his first Canadian title. He trails Radford by 751.66 points.

No.7 Jared Parsonage has also steadily climbed the rankings, sitting 909.16 behind Radford entering the finals. In Abbotsford, Parsonage finished second after riding Big Rig for 82 points and Kalit Karma for 87.5 points. Much like Coverchuk, No.9 Justin Lloyd will also look to improve upon his showings at the last two events, having failed to log a qualified ride in Winnipeg or Abbotsford.

PAST EVENT WINNERS – In 2016 Zane Lambert won his first PBR Canada Finals event title after riding Blue Stone for 83.5 points in Round 1 and winning Round 2 with 85.5 points on Shot of Whiskey.

BATTLING BROTHERS – Brothers Bryce and Lonnie West will duke it out this weekend in a family showdown at the 2017 PBR Canada Finals. While Lonnie, ranked No.5 is in the heat of the race for the national title, Bryce has competed in just two PBR events this season travelling to April’s event in Marwayne and June’s stop in Moose Jaw.

A STREAK CONTINUES – Both set to ride this weekend, Scott Schiffner and Zane Lambert will continue their streak as the only two riders to compete at all 12 PBR Canada Finals. Schiffner and Lambert have both won the Canadian title, taking the win in 2006 and 2013 respectively.

RETURNING CHAMPIONS – With only one rider, Aaron Roy, having won multiple Canadian titles in his career, three past Champions, Scott Schiffner (2006), Tyler Pankewitz (2007) and Zane Lambert (2013) are set to ride in Saskatoon, all looking to join the elite club of multi-title holders.

THIS WEEKEND’S FORMAT – The PBR Canada Finals at the Monster Energy Tour, presented by Mac’s and Circle K will feature three rounds of bull riding. Each of the 35 competing riders will get on one bull in Round 1 on Friday and Round 2 on Saturday. The Top 15 ranked bull riders will then advance to the championship round Saturday evening. Riders will be vying for both the event and national title, in addition to $20,000 in prize money. On the line this weekend are 2,000 Canadian points and 80 world points.