“Game on” for Byrne as He Heads to Australia 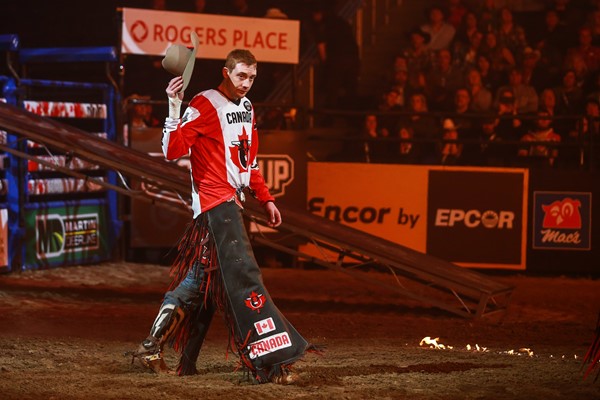 NEW YORK – Sidelined the majority of the 2017 season with injuries, Tanner Byrne is eager to get back to doing what he does best, riding bulls.

After becoming the first Canadian in 13 years to win an elite tour event in 2016, riding to wins in Anaheim, California and Duluth, Georgia, the 25-year-old was limited to just five events on said tour in 2017 due to injury, namely a torn groin.

However, now the star Canuck is back to full health and eager to start earning points towards the 2018 standings.

“I feel good, kind of just getting back into the swing of things, get back in the groove.”

“The way that I feel right now is good, my body feels good, I’m working more in the gym and getting fit physically and ready to go.”

While the 2018 season was already underway while the Prince Albert, Saskatchewan native was riding as a member of Team Canada at the Global Cup, he took no time off, entering the New Town, North Dakota Real Time Pain Relief Velocity Tour (RVT) event just six days after the conclusion of the inaugural five-nation showdown.

Riding stateside, Byrne finished 12th overall, and while the result failed to earn him any world points, his “pretty good” 85.5-point trip aboard Stars & Stripes gave him a needed confidence boost.

“It kind of gave me confidence again that I remember how to do this,” Byrne said of his ride.

“It’s bull riding, it’s one of those events where it just kind of takes one to make you click and get that feeling back, and just the momentum of things to swing in your favor and keep rolling. So I think I’ve got that now.”

And Byrne is ready to continue rolling with his newfound momentum, as his next trip on the road will take him more than 9,000 miles from home, as he heads to Australia for the second time in his career.

“I’ve been once before and it’s a super nice place, the people are really, really nice,” Byrne said.

“I’ve gained a lot of friends over there, Lachlan Richardson and all of his brothers, Kurt Shephard, Fraser Babbington, the whole crew of fellows I’ve been travelling with. They’re always up in Canada, and so to go over there and hang out with them guys and see their lifestyle, the bulls and the events over there is always a good refresher of why we ride bulls and where everybody came from.”

“So I’m super excited to go over there and ride some bulls.”

Byrne first went to the Land Down Under in 2013 in the hunt for points towards to 2014 season and a place on the elite tour.

Abroad for a month with his wife Meghan, Byrne was joined by fellow countrymen Ty Pozzobon, and his wife Jayd, and Zane Lambert.

“That was sweet,” Byrne said of his initial trip.

“We cruised over there for a month, and we went to a bunch of different bull ridings. It was a good start to the year.”

On that expedition, Byrne competed at two events, highlighted by a fourth place finish in Barooga, NSW, collecting a total of 60.5 points.

While the results alone didn’t garner him a spot on tour, it set him on the course which ended in him returning to the top tour that March in Phoenix, Arizona, a spot he has yet to relinquish.

As he prepares to return to Australia for the first time in four years, Byrne is laser focused on his goals and has a new traveling partner this time in his father, Ryan.

“Roll over there and hit it up,” Byrne declared.

“I’m feeling good about going and being on the road and wanting to get back out there and prove myself again and just do what I do and stay on bulls.”

Following the December 2nd event in Melbourne, Victoria and Dec. 9th stop in Adelaide, South Australia, Byrne will return to Canada on December 10th when his focus will return back to the elite tour, planning to use his injury exemptions from 2017 at the start of the new year.

“I’ll take the rest of December off and then get rolling again in the first week of January [in New York City] and hit the trail hard,” Byrne said.

And while Byrne hopes his event log in 2018 reads more like his 2016 season than 2017, he is grateful for the time this year he was able to spend at home with his wife and young daughter Layla.

“With being out most of the year I spent a lot of time at home which I haven’t done in the past years,” Byrne reflected.

“There were some big life changes that happened when I was out injured that I got to take part in, that I probably wouldn’t have I guess if I was out going, so that was a positive on the year definitely.”

“I’ve got a little girl, she’s going to be two in February, so I got to spend a whole bunch of time with her, which was pretty amazing. And we’re building a house, it’s supposed to be done here around December 15th or December 20th so when I get home from Australia it will be moving time and get into that.”

Stay up to date with Byrne while he is Australia by following the event results at pbr.com/en/daysheet.