In Pursuit of a Dream 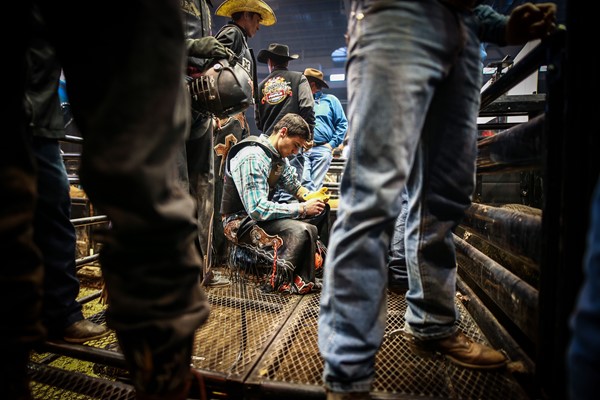 SASKATOON, Saskatchewan – For Coverchuk, it has been a long standing dream to be named the PBR Canada Champion and travel to Las Vegas, Nevada for the PBR World Finals.

However, while always a perennial contender, both have seemed to elude the Meadow Lake, Saskatchewan-native, most narrowly in 2016 when he finished third in the title race behind Ty Pozzobon and Dakota Buttar.

“I was just outside last year,” Coverchuk said earlier this season.

“That kind of lit the fire underneath me.”

As the 2017 PBR Canada season prepares to conclude this weekend in Saskatoon, Saskatchewan with the 12th annual Canadian Finals, Coverchuk once again finds himself in position to actualize his dream, ranked No.3 in the standings, 711.66 behind No.1 Brock Radford.

“There’s two good guys ahead of me. Zane [Lambert]’s riding great and Brock’s riding great too, so it just really comes down to me riding my bulls, let the chips fall where they’re going to fall.“

Year long, the self-described “fire” lit under him following the 2016 Finals have led Coverchuk to have one of the best seasons of his young career.

He began 2017 fourth at the Touring Pro Divison’s PBR Challenge at Lethbridge, which he followed with a fifth place showing in Teepee Creek, Alberta and seventh place outing in Prince Albert, Saskatchewan.

Coverchuk logged an additional three Top-5 finishes before striking gold in Calgary, Alberta, winning the Ranchman’s Bullbustin’ and $11,081.81, one of the highest payouts at Touring Pro Division event in 2017.

However, at the two most recent events, both Monster Energy Tour stops in Winnipeg, Manitoba and Abbotsford, British Columbia, Coverchuk has gone 0-for-2.

“The last couple weeks haven’t been going as planned,” he said of his recent slump.

“I just try to shake it off and every day is a new day, another bull, so I’ll be going into Saskatoon with a clear mindset more than anything and just ride each bull.”

Despite the shutout, he is well within striking distance of the title with 2,000 points available in Saskatoon.

“We work all year, and for myself it’s pretty great that all these points are available at the finals,” he said.

“Recently I’ve been falling behind to Brock and Zane, so I love the fact that there’s so many points available at the finals.”

For Coverchuk heading into the Finals with a clear mindset will be crucial, attributing his recent slump to being, “more mental than anything.”

“It just feels like I’m way out of shape and I’ll watch the video and I’m actually sitting in not too bad of shape, but I’m bucking off, so I don’t know.”

“Confidence going back to the right is what I have been struggling with as of recently,” he elaborated.

“I’m just going to really focus on trying to stay focused during the ride and never say die, don’t quit, and keep driving forward, and hopefully it works out.”

“We’ll just go into Saskatoon and do good there, forget about the rest, the last couple weeks, and go in and hopefully just do what I do, ride bulls.”

After losing his father, and biggest supporter, to cancer in December 2016, Coverchuk has ridden season-long in his memory.

“It would mean the world to me to win it for my dad,” Coverchuk said.

“It hasn’t been going great as of recently, but it doesn’t matter, I’ll just keep my hand closed and try as hard as I can, just like he taught me. There’s nothing more I can do, just let the riding do the talking and that’s all I can do!”

At his aid, hoping to propel him to his first title, will be the local Saskatchewan bull riding fans, all cheering for the home province hopeful.

“Saskatoon and Saskatchewan they always stand behind me,” he said.

“Every time I’m in Saskatoon I notice the crowd really likes me, and that really gets me going, gets my motor running.”