In The Bull Pen With Nansen Vold 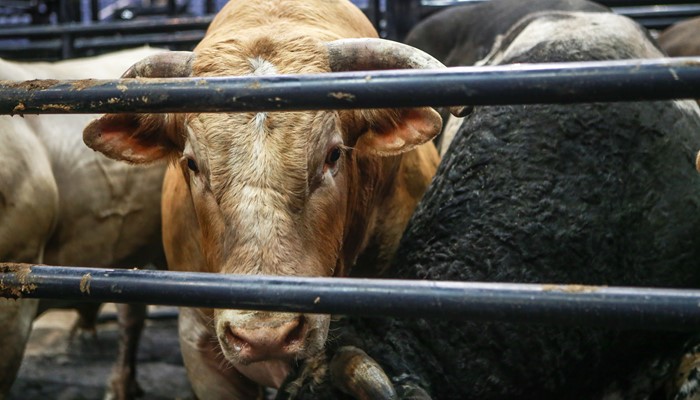 Nailed, a Canadian bull currently bucking on the elite Built Ford Tough Series, looks on from the back pens of the Monster Energy Tour’s 2016 event in Winnipeg, Manitoba. Photo by Covy Moore

TORONTO, Ontario – In recent history a select group of bulls has dominated the likes of PBR Canada competition each season.

While Canada boasts a deep pen of quality bulls, this group’s athletic prowess leads them to instantly set themselves apart from the rest of nation’s deep pen as top contenders for the year’s Bull of the Year title.

These standout animal athletes and Bull of the Year recipients have included VJV Slash (2011), Pound the Alarm (2012) and Minion Stuart (2015).

This season has proven no different, with three bulls delivering statement performances at the most recent Touring Pro Division (TPD) event.

In Stavely, Alberta for the Glen Keeley Memorial Bull Riding, Stunt Man Ray (Girletz Rodeo Stock), Blow Me Away (Vold/Prescott) and Johnny Ringo (Vold/Rafter G) each earned a bull score of 45.5 points for their work in the championship or bounty bull rounds.

And one man, Nansen Vold, is the stock contractor behind two of these rank bovines.

“He’s definitively on the tentative list for this year,” Vold said of Johnny Ringo’s chances at the PBR Canada Bull of the Year title.

“He doesn’t really have a bad day, he won bull of the night the other day in North Battleford, [Saskatchewan] and he’s been good all year. [Riders] have been 90 on him before and they don’t ride him very often. He’s bucked off some pretty good guys the last couple weekends that come up from the states. He’s really showy for sure.”

In fact, before Jared Parsonage covered Johnny Ringo in Stavely for 90 points as the event’s bounty bull, he was last ridden in October 2016 by Ty Pozzobon.

His nearly nine-month, seven-rider buck off streak included the likes of 2013 PBR Canada Champion Zane Lambert and Cody Coverchuk, one of the top contenders for this year’s title.

Vold is also no stranger to having one of his bulls win PBR Canada Bull of the Year, last taking the honor in 2011 with Slash.

His rank pen has also twice propelled him to the PBR Canada Stock Contractor of the Year award, earning the title in 2012 and 2014.

“We have had a lot off success the last couple years with that award,” Vold said.

“It never gets old receiving it. We try hard every year to bring the best bulls we can to every event. I think the bull riders see that and we strive to look after those guys more than anything. It’s an honor to get that award.”

Also rewarding is seeing large bonuses won on Vold Rodeo bucking bulls, like the $12,500 won by Parsonage when he covered Johnny Ringo at the Glen Keeley Memorial Bull Riding.

“There’s nothing better than that,” Vold said.

“It’s great for both the rider and the bull. I think that’s only the second ride ever on that bull. For that to happen, it’s pretty spectacular, especially at that event.”

“We’ve had success in [Stavely] before. Some of the best bull rides of the year happen there,” Vold remarked.

Stunt Man Ray and Blow Me Away, who also delivered standout performances at the Alberta event, join Johnny Ringo as top contenders for the PBR Canada Bull of the Year title and may be in contention for a trip to Las Vegas, Nevada for a chance to buck at the PBR World Finals in November.

“Hopefully we get to go down again,” Vold said of making the southerly trip to the PBR World Finals.

Should this trio of bull power make the journey, they will join an elite group of Canadian bulls that are already competing on the premier Built Ford Tough Series (BFTS).

“There had to be eight Canadian bred bulls that were at [Tulsa], which is good to see.” Vold said of the BFTS’ first event back from the tour’s annual summer break.