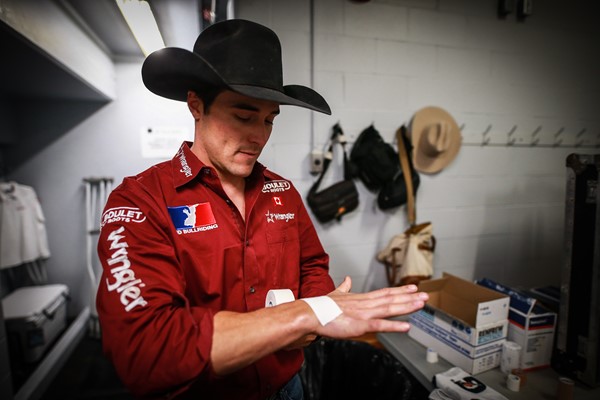 In Saskatoon, Zane Lambert could become the second to win more than one PBR Canada National Title. Photo by Covy Moore / CovyMoore.com

SASKATOON, Saskatchewan – Since 2006 when PBR Canada crowned its first national champion, only one rider, Aaron Roy, has claimed the year end title more than once.

2013 PBR Canada Champion Zane Lambert, however, is hoping to become the second rider in history to accomplish the feat at this weekend’s 12th annual PBR Canadian Finals.

“If I was to walk away with the win this year, it was my better average riding year and I put it together at the one’s I did go to, so I think that really makes me appreciate the year and the buckle if I could get it. I’m really looking forward to it. “

Amidst the tightest race for the title in Canadian history, Lambert will head to Saskatoon Ranked No.2 in the national standings, just 379.16 points behind No.1 Brock Radford.

“It’s been a great race and I think it’s going to be lots of fun in Saskatoon to see it all unfold,” Lambert said of the overall race.

And while the heated race for the champion’s buckle may be an unprecedented happening in Canadian history, heading into the final event of the season ranked No.2 in the standings is a position Lambert is familiar with.

“I’ve been in this position before,” Lambert remarked.

“I’ve won it and I’ve lost it here before, so I’m trying not to get too worked up about it. Just trying to do my best, take care of my bulls and let the judges do the rest.”

With 2,000 points available this weekend, the 31-year-old is riding a hot streak, looking to capture his second buckle.

At the last four events he’s entered, dating to September’s Touring Pro Division event in Stavely, Alberta, Lambert has finished third or better. At each stop, he has delivered at least one perfect performance hauling in 785 national points.

“With riding as many bulls as I did this last stretch I’m surprised I didn’t catch up to Brock as much as I thought I would, but I’m not real worried about that,” the veteran rider said.

“I’m just happy that my riding is doing good and my mind is coming in.”

“I feel like my riding is good right now and I can ride really good bulls. I’m looking for good things, put some pretty big averages and big scores on the board, and I think I’m capable of doing that right now.”

“So that’s what we’re focusing on is the riding, and not really worried about too much more. “

His second-half surge began at just his third event back after a broken foot, which sidelined him for nearly a month.

“It slowed me down quite a bit this year,” he said.

“I was surprised with the small injuries that kept me out as long as they did. I think I missed seven events, and that’s pretty big throughout the summer time when you only have 20 events and you miss seven of them in a row.”

“It was tough, and I lost some momentum, but we’re getting it back now.”

For Lambert, who is the only rider to compete in all eleven PBR Canadian Finals to date, his 2017 season continued the momentum he concluded 2016 with, having won that season’s Finals event title.

At the second event of the 2017 PBR Canada season in Teepee Creek, Alberta, Lambert double-entered and rode his way to both a fourth and ninth place finish.

Over the next two months, he attended seven additional Monster Energy Tour and Touring Pro Division events collecting two Top-5 and five Top-10s, before he found himself back in the winner’s circle.

Three events later, on July 4 at the Ranchman's Renegades Charity Bullbustin' Lambert broke his foot, not returning until August 12 in Elnora, Alberta

Failing to earn points in both Elnora and at the next event in Coronation, Alberta, Lambert returned to his championship form in Stavely.

At the Glen Keeley Memorial Bull Riding, Lambert both split the event win with Jared Parsonage and tied for seventh compliments of his double entry.

Less than three weeks later, Lambert finished second at the final Touring Pro Division event of the season in Magrath, Alberta, which he followed with third and second place efforts at the two most recent Monster Energy Tour events in Winnipeg, Manitoba and Abbotsford, British Columbia respectively.

“I felt like I had a really good start to the year, and hopefully I’ll have a really good finish. So we’ll just forget about the middle and try to finish strong. “

While Lambert hopes to leave Saskatchewan’s largest city with his second title, that accomplishment would also be a stepping stone to accomplishing one of his larger season goals, qualifying for his sixth PBR World Finals.

“It’s always been the goal for me and this year I really wanted to get to the World Finals, but with injuries and health I haven’t been able to go down the road as far as I wanted to,” Lambert said.

“I kind of missed the opportunity to get there through the point system, so now there’s really one way for me to do what I want to do this year now and it starts right here.”

Currently ranked No.49 in the world, Lambert would need the berth onto the Real Time Pain Relief Velocity Tour Finals earned by the Canadian champion in hopes of actualizing that goal.

Lambert would then need to follow a path similar to the one taken by fellow Canadian Dakota Buttar in 2016, earning enough points at the Velocity Finals to propel him into the Top 35, which he currently trails by 190 points.

“Everything has to align perfectly, but I’m riding good and if I get the right draws, who knows its bull riding.”

While Lambert heads to Saskatoon excited for his own surging success, he is also happy to see the young contingent of Canadian riders, such as 22-year-old Radford and 21-year-old Lonnie West, having record years of their own.

“I think there are a few guys that have really blossomed here in the last six months that we’re looking for big things from,” he said.

“I expect to see myself do it, but it’s going to be cool to see a couple of kids riding really good, riding really hungry. It’s the end of the season and they’re all still going, they’re still hungry.”

“That’s really good to see, there’s a whole crew of young guys that are really giving it now and fighting through. The momentum is in the bull rider’s dressing room and we’re going to put up a lot of points on the board.”