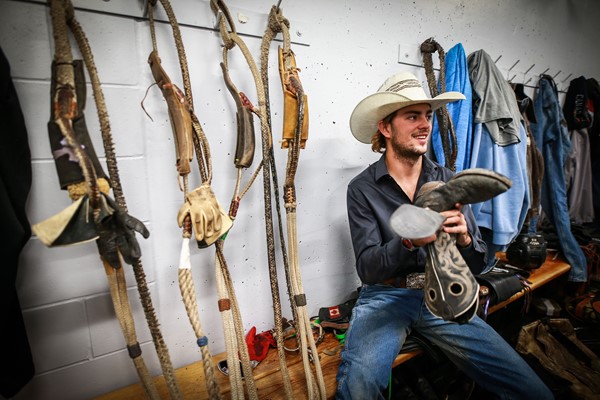 TORONTO – When PBR Canada’s Monster Energy Tour (MET) returned from a three-month break, Lonnie West was ranked No.14 in the national standings.

After finishing second in Winnipeg, accomplished by riding Ulterra’s Counter Force for 84.5 points in Round 1 before splitting the championship round win with 87.5 points aboard Heaven’s Basement, West earned 270 Canadian points, rising to No.10 in the standings.

Six days later, the 21-year-old one-upped himself, riding to his first event win at the final regular-season MET event of the year in Abbotsford, British Columbia.

“It’s just another win but it was pretty special to me,” West said.

“The first PBR win is always sweet and it’s pretty exciting when it’s the last event of the year.”

“I just rolled with Winnipeg, I didn’t change anything, I didn’t even cut my hair,” he joked.

“I can’t change anything when it’s working. I go with the same old game plan every time, I crawl in the chute and it’s just me versus the bull. I go through the same stuff. I tie my hand in there and I just tell myself to not quit and just stay calm.”

His night began with a sixth place effort in Round 1 where he rode Tippin Point for 84 points. West returned in the night’s final round in a thunderous way, winning the round by notching the high-marked ride of his PBR career when he rode Anika’s Pet for 89 points.

His perfect 2-for-2 performance earned him 465 Canadian points, propelling him to No.5 in the standings.

“I knew I had to ride up and get a win,” West declared.

“I needed that to make up ground going into the finals. It put me in contention now. I’m only 751.66 points back and if I can just keep riding the way I am, I think I’m sitting really good.”

For West, the win was something he felt was a, “long time coming.”

“Last year I had been second a few places, and lots of seconds this year. I was thinking after Winnipeg, I’ve got to get a win [in Abbotsford]. I was super pumped when I got it. That was one of the highlights of my career.”

While West can’t recall a specific change that has propelled him to his recent success, he is quick to note several things he has been working on, including staying calm in the chutes.

“Nothing major, but, just lots of breathing and staying focused and calm in the chutes,” he said.

“It seems to be working so I’m going to keep doing that. “

As he prepares to make the journey to Saskatoon, Saskatchewan for the twelfth annual PBR Canada Finals, West plans to approach the event with the same plan he had in Winnipeg, Abbotsford and throughout the majority of the season.

“I’m going into the Finals with the same mentality that I’ve always had -- one bull at a time.”

“I know it’s not going to matter what a guy draws because all the bulls there are going to be the top bulls from the entire year. If I can get all my bulls rode, that’s my goal, and I should be sitting good. And that’s a goal I set this year too, I didn’t set a win this or that, I just wanted to ride as many bulls as I can, and like everyone says, the guys who rides the most bulls wins. So I’m excited.”

And West is just one of numerous riders who has a shot at being named the 2017 PBR Canada Champion as the Saskatoon event will serve as the culmination to a season which featured the most fiercely contested race for the Canadian title in history.

“It’s going to jack people up too,” he said of his fellow competitors.

“You’re going to see some big rides and a lot of guys stepping up at this one.”

With 2,000 points on the line on Oct. 20-21, the Top 43 riders in the Canadian national standings have a shot at winning the title.

Despite the increased amount of competition this season, West remains focused on his goal.

“I’m not going to worry about anything else, just me versus the bull, and everything else will work out and fall into place.”

In preparation for the event, West has had the good fortune of receiving one-on-one mentorship from Aaron Semas, one of the PBR’s founding fathers, who visited the West family home for a hunting excursion.

“This week was pretty influential,” West said of the experience.

“We’d sit down in the basement with Aaron when we’d get back from hunting and we’d watch old PBR bull riding tapes. The one night we watched bull riding videos with Aaron until four in the morning, and dad and Aaron just coached us.”

“We’d replay rides that were rank rides, good rides, and just focus on all the correct stuff a guy needs to do,” he elaborated of their time together.

“It was a nice awakening actually because you get going down the road and sometimes it can be overwhelming. You get thinking, like for example when I hurt my leg, when I came back, I was fighting my head, thinking I need to do this and that. I was overwhelming myself and I wasn’t on the right track that I needed to be. So it was getting to slow it down and just replay, get to the basics and relearn what you already know, just brush up. Things are working out now.”

And while Semas has since left the family’s Alberta home, West still turns to him for council.

“He says ‘send me all of your videos,’ so I’ll send him my videos after a weekend and he’ll kind of tell me what I did right and wrong.”

“I grew up watching the guy, we’ve got so many tapes of him, and now to be texting him and him giving me pointers is just absolutely awesome.“

While Semas has proved a mentor as of late for West, he still looks to his father Kevin, as his greatest teacher.

“Everything I know is what dad has taught me,” West said.

“That guy has been down the road as much as he has, and seen everything, he knows a lot of stuff that rookies, not even rookies, experienced guys still haven’t learned yet, so I’m blessed where I am and what I’ve grown up around.”