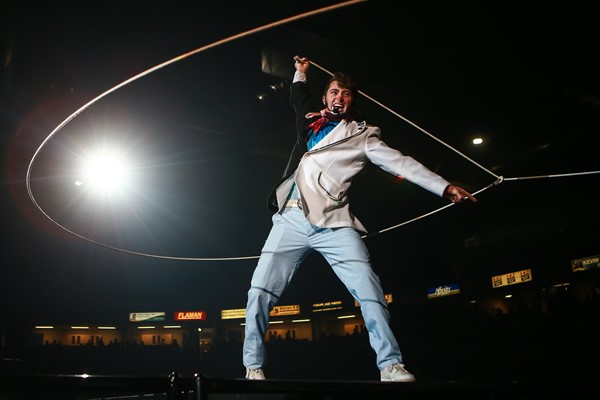 NEW YORK – For those PBR Canada fans who tuned into the season premiere of MTV’s Amazingness last Friday, they saw a familiar face when Brinson James Harris took to the stage to perform his rope act.

Greenlit by the network in November, the program is unlike any talent competition currently on television. Featuring six viral talent acts, the judges, led by host and famed MTV personality Rob Dyrdek, select a champion during each episode, with the winner walking away with the $10,000 prize.

And for James, while the opportunity took him outside the bull riding arena, it began at a PBR event.

“We were in Kelowna, I do believe,” James recalled. “Right after the production meeting I got the message from the talent agent.”

“She messaged me and said, ‘Hey, we’re starting this new show with Rob Dyrdek,’ and anything that has to do with Rob Dyrdek I’ve watched it from the very beginning - when he first came on MTV with Rob & Big, Ridiculousness, Fantasy Factory, I was a huge fan. So as soon as they said his name and wanted me to be a part of it, I was down to do it.”

Once cast for the premiere episode, James travelled to California for several days of filming.

“I probably did the act maybe three, four times and then finally Rob came out there and we did it for real,” James said of the filming process.

“I messed up a couple times in the practice run, but when it came time to mean business, and Rob was out there, I felt like I stuck it 110%. I gave it all I had.”

Despite his efforts, the funnyman fell short of emerging the victor of the episode.

“Unfortunately it wasn’t super enough to make me move on, but I still was on cloud nine just to be out there on stage with [Dyrdek].”

“The lady who won limboed under a car, so that is outstanding feat right there. I just needed to step my game up a little bit more, put a little bit more pressure on myself maybe, jump through a couple different ways, maybe do a handstand, I didn’t get to do that, but there’s always a couple more things I could have done.”

Within the format of the competition, each act attempts to dethrone the top talent at the time of their performance, in a win-or-go-home style showdown. For James, his opponent was a dance troop.

“They really were amazing,” James recalled of the dancers. “They walked down a flight of stairs on their hands, they were an incredible group, so it was a tough competition.”

“Of all the tricks I did do, I nailed them perfectly. What I thought I could do to move on, I did it.”

“Hopefully that’s not the only time I’m going to be out there in Hollywood with all the bright lights, doing my deal,” James elaborated.

And while the show temporarily saw James entertaining on a different platform, he was quick in returning to performing in front of hundreds of PBR enthusiasts, travelling to Australia for the international tour’s December events.

“We filmed [Amazingness] on the sixth of November, we probably got done filming at seven or eight o’clock. I went back to the room got on a flight on the next day on the seventh, flew to Florida from Los Angeles, and the next day, the eighth of November, flew from Florida to Texas, and Texas to Sydney, Australia,” James said of his three-day travel whirlwind.

After a month in Australia for the nation’s PBR events, James is back stateside, but eager to return to PBR Canada Monster Energy Tour events.

“Those are the biggest events that I work all year long, the Monster Energy PBR Canada events,” James said.

“Last year, the 2017 season, we went every stop, every place together, we all became one big unit and I just can’t wait to go back up with that PBR Canada Family because it is a family for sure up there."

And for James when he thinks back to his time on Amazingness it will bring him back to those fond memories of the 2017 PBR Canada campaign.

“When Rob and all of them mentioned back to me they wanted me on the show it was right there at the end of our Monster Energy Tour, so it was kind of slowing down, and it was really a capper of our tour was to go and finish off with that.”

While James may not have won the show, he did have the opportunity to meet MTV star Dydrek.

“What was really cool was we were all hanging out in the dressing rooms, waiting for the day to begin, and he took a wrong turn and walked down our hallway,” James said.

“I stepped out there and I said, ‘Hey buddy,’ and he said, ‘Hey man I want to talk to you, but I’m not allowed to right now. I’ll talk to you here in a little bit.’ And as soon as he left I turned into a thirteen-year-old that just met Taylor Swift.”

“Later on, a little bit after the show, he actually came up to us all, shook our hands, he told us how hard it was for him, because it all came down to his decision. He’s a really, really nice guy, and it was really cool to just be around him and his entire little posse.”