Radford Goes Down Under 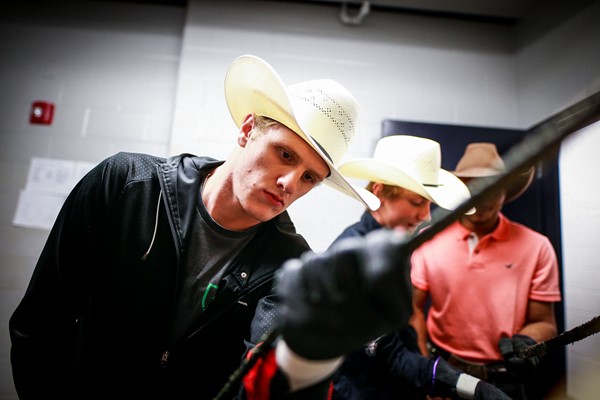 Brock Radford is in Australia until December 30th, 2017. Photo by Covy Moore / CovyMoore.com

TORONTO – To say De Winton, Alberta’s Brock Radford had a good season, would be an understatement.

The 22-year-old began the 2017 slate of events with his career-best finish being a second place effort on July 22, 2016 at PBR Canada’s Touring Pro Division event in Czar Lake, Alberta.

By year’s end, not only had Radford captured five event titles, four of which he won consecutively, making PBR history, but he also made his premier tour debut and competed as a member of Team Canada at the inaugural Global Cup to finish a career-high No. 45 in the world rankings.

And with the Global Cup just five days in the rearview mirror, Radford isn’t taking any time off, already in Australia to begin collecting points towards the 2018 standings.

“Heck yeah I am so excited to get out of the cold and go down there for a month,” Radford said before he boarded a plane bound for Australia.

“I think this is going start my year really good.”

While travelling to the Land Down Under for a slate of four events excited Radford for the points available, he was also looking forward to the opportunity to continue working on his skill set.

“Lots of points, but it’s also cool because I’m not going to sit at home,” he said.

“Sometimes after November it’s like a two month, three month break unless you’re going to practice pens all the time. But you just keep going and I think it’ll really help my bull riding.”

While the more than 7,600 mile trek may seem daunting, for Radford it’s a trip he has done before.

“I did this trip a couple of years ago when I had just come up short of CFR,” Radford reflected of his 2014 journey to Australia.

“I went over, did a few events, rode a couple of bulls, but wasn’t consistent enough. So now I’m going to go over there and do what I’ve been doing over here – just ride my bulls and let the rest take care of itself.”

With one event under his belt on his current trip, Radford is already pacing to have a better outing in the country.

Competing at the Townsville Iron Cowboy, Radford rode SweetPro’s Natural Disaster for 85 points in Round 1 and Different Strokes for 82.5 points in Round 4. He finished fourth overall at 167.5 on two for $2,330.42 AUD.

And despite him still being in North America, Radford will soon be joined by fellow Canadian Tanner Byrne on his Australia campaign.

“We’ll get some Canadian flags on the board down there and it’ll be good,” Radford said.

And this trip will allow him to do more than compete, but will represent a home coming of sorts.

During his six weeks abroad, in addition to competing, Radford will have the opportunity to visit family. His father Max is native to the country, relocating to Canada in 1987 when he was just 23.

“I’ve got my grandma and grandpa over there, aunts, uncles, cousins. I probably have more family over there than I do here now,” Radford quipped.

“Actually I think I have family I’m meeting that I’ve never met before that my dad was telling me about that are from there. So It will be cool to see everybody, and you know, I’ve been over there lots, I try to get over every two to three years.”

“So I pretty much take out two birds with one stone, see family and do something that will get me somewhere and towards what I’m working for.”

And what he’s working for is a consistent place on the PBR’s elite tour, something he experienced three times in 2017.

“I don’t get automatic events, but with injuries I’ll be knocking on the door to get in there,” Radford said of the possibility of him riding at the season-launch event in New York City.

“Hopefully, you know, fingers crossed, we’ll get in there and get hitting them right off the bat. I want to keep getting on those bulls, I really liked that, and that’s the place you want to be.”

While Radford’s focus is now squarely on the 2018 season, he is optimistic for the Canadian contingent during this upcoming season after the nation’s third place showing at the inaugural Global Cup.

“I believe all of us could make the tour,” Radford said of his fellow Canadian riders.

“Come Australia we’re going to go get a Global Cup title and (that) horn back.”