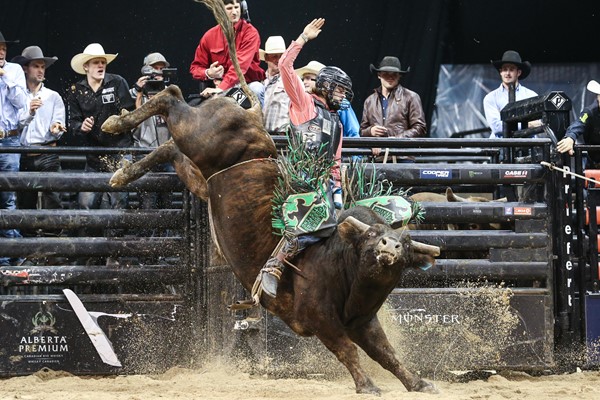 Lonnie West rides Heaven's Basement for 87.5 points in the Championship Round in Winnipeg. Photo by Covy Moore / CovyMoore.com

TORONTO – While five riders have already been named to Team Canada for the inaugural Global Cup, nine spots remain to be filled on the host nation’s 14-man roster.

“I’m hoping I squeak in there,” Johnston said. “I’m hoping I can do good in Abbotsford and make a run for it.”

The first-ever PBR Global Cup is set to take place in Edmonton, Alberta on Nov.9-11 at Rogers Place. The three-day event will begin with the Canadian qualifier where the nation’s roster will be finalized. Five riders will advance compliments of their performance at the event, while four additional members will be selected by Team Canada’s coach Aaron Roy.

“I figure I have a pretty good chance of getting picked, but you can never be too sure,” said Young.

“I’m hoping that everything on Thursday goes as planned and I’m not relying on getting picked.”

In the Canadian national standings West ranks No.5 while Young is No.17 and Johnston is No.25.

West held the top spot in the Canadian national standings for several weeks at the start of the season, before breaking his foot and tearing ligaments in his ankle in June at the Grand Prairie Stompede, a Canadian Pro Rodeo Association (CPRA) event.

In his return to PBR competition, West finished fifth at the August Touring Pro Division (TPD) event in Elnora, Alberta but was shut out at the next four PBR events he entered.

Last weekend, however, West returned to the winning form he had to start the season, finishing second at the Monster Energy Tour (MET) event in Winnipeg, Manitoba after going a perfect 2-for-2 and tying for the championship round win.

He surged from No. 14 to No.10 in the national standings, putting himself in the thick of the race for the 2017 PBR Canada title.

“I love the Monster Energy Tour events. They’re the sweetest events all year. The crowds; I couldn’t believe how many people were at Winnipeg. It was packed and the crowd was super loud.”

West knows however that the Global Cup will be a whole other level of competition, a step up which excites the young gun.

“A big stage like that, you’re going to see it, it’s going to step people up,” West said. “I’m excited for it.”

For Young, he hopes that a spot on the Global Cup roster will be one more accolade he can add to his resume for a season which already saw him win his first PBR event.

Young, however, recognizes that he has a few areas to improve upon before the national qualifier.

“I had a good summer and it was starting to look a little better, but I’ve just been having a rough fall,” Young said.

“I’ve been working on a few things and hoping to pick-up and continue that with Abbotsford and Saskatoon and then straight to the qualifier right after.”

And Young had to look no further than current Team Canada rider Dakota Buttar for an example of the form he hopes to achieve.

“Dakota is the biggest example of someone who gets over bulls. If he can sit up that little bit, and it makes that big of a difference, it puts truth to it.”

While West and Young both have several PBR seasons under their belts, for 18-year-old rookie Johnston the opportunity to compete at Global Cup would be one of the most monumental accomplishments in his young career.

“It would be awesome getting to represent your country, and ride with all the guys I look up to like Tanner Byrne. He’s not too much older than me, but he’s old enough that I’ve seen him on the Built Ford Tough (Series) and look to him, and it would just be an awesome opportunity.”

Unable to compete at last Friday’s Winnipeg MET event, Johnston’s last PBR event was at the September TPD stop in Magrath, Alberta where he finished seventh.

“I’m just trying to stay on my goals and that’s all you can do,” Johnston said of his approach to making the team.

“Ride each bull and the rest will fall into place. “

For several of the Canadian riders, they faced a decision between attending the PBR Global Cup and the Canadian Finals Rodeo (CFR).

For Team Canada hopeful West the decision was simple.

“I’m ready for a change and a step up so that’s why I decided on Global Cup,” the 21-year-old said.

“For the future of us, CFR is great, rodeoing is great, but as far as our careers are concerned bull riding is where it’s at. The sport is growing.”

“I’d rather ride against Jess Lockwood and all the Brazilian guys and see where I’m at. Plus, I think we’re going to whop ass. I think the Canadians are going to win.”

“We’ve got a pretty strong group,” West said of the current roster.

Among the roster Buttar is a consistent presence on the elite Built Ford Tough Series, while Lambert spent several seasons on the elite tour, and Radford and Lloyd each made their rookie debut in 2017.

“We’ve had quite a few Canadians make it on BFTS this year,” Young said.

“Now they’re on our team and I think we’re just really going to defend the country that much more.”

For the Canadian roster, a spot on the team, has added significance, especially for the Alberta trio.

Hosted in their home province, the international showdown means another opportunity for each competitor to ride in front of their family and friends.

“You’ve got lots of support and lots of initiative to really win the thing,” West said.

“Technically it’s one of the local events for me, and I’m not a local guy, but it’s the closest one to home and one of the biggest ones to home,” Young reflected.

“All of my family is going to make it regardless of whether I make it there or not, they’re going to be cheering on Team Canada. I suspect that it’s the same for everyone on that team, we’re going to have a lot of support behind us and being in Edmonton is pretty awesome.”