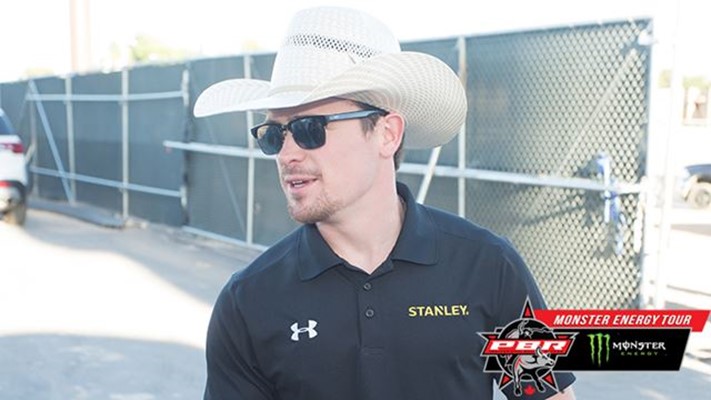 Matt Triplett is one of six riders in the Top 35 who have earned PBR belt buckles in three or more countries. Photo: Andre Silva

PUEBLO, Colo. – Matt Triplett has a 5-hour drive to Calgary, followed by a 6-hour flight to Quebec City, before he aims to begin his 2017 summer run with an important victory at this weekend’s PBR Canada International Major event at the Videotron Center.

However, it isn’t the farthest east Triplett has had to travel to Canada.

In fact, it was only Triplett’s fifth PBR event of his career when the then 19-year-old from Columbia Falls, Montana, won the Halifax Invitational in Halifax, Nova Scotia, in 2011. The win earned him his first PBR belt buckle, and a trip to the Built Ford Tough Series.

“I wasn’t doing so good right off the bat,” Triplett recalled on Tuesday afternoon. “I quit pro rodeoing and I started PBRing. That is when it finally clicked. I went to Halifax and won. Then it all started to roll for me.

“Canada played a big part of my career starting out.”

Fast forward to today, and Triplett is ranked eighth in the world standings, with three trips to the PBR Built Ford Tough World Finals under his belt.

Triplett also appears to finally be regaining his World Champion form from 2014 and 2015 before multiple injuries (shoulder and elbow surgery) cost him the majority of the 2016 season.

“I feel like I almost am where I was when I left off,” Triplett said. “I am still not quite there. I still have little improvements to do. The big thing now is I am moving my feet. Really, it goes back to enjoying the moment and remembering you dedicated your entire life to get here.”

Triplett finished last year ranked 46th in the world standings. He used two victories this past fall at PBR Australia events to jumpstart his return to the Built Ford Tough Series this year.

Triplett is one of only six riders in the Top 35 of the world standings to have won PBR belt buckles in three or more countries during their respective careers.

“That is something I never really thought about,” Triplett said. “That is pretty awesome. I may have to go down to Brazil and try and win another.”

Triplett originally had plans on returning to Australia this summer to make a run at the PBR Australia title, but he eventually decided to stay in North America where there were more events to hit.

With Quebec serving as the inaugural international major event, the first PBR Canada Major belt buckle will be on the line.

“Canada puts on good bull ridings and there are a lot of people that attend them,” Triplett said. “The Canadian side of the border likes to get a little wild and have fun. It is fun. It just makes it fun when everyone is like that.”

While the pride of being the first to win the international major is important, the greater goal for some of the top riders competing in Quebec will be the 300 points toward the world standings the event winner will receive.

Any rider outside of the Top 35, including PBR Canada national riders, would immediately jump within the Top 35 of the world standings, and have a chance to secure a bid to the resumption of the Built Ford Tough Series in August if they are victorious.

“This is huge,” Triplett said. “Not only to be able to win the amount of money you can, but 300 points. You can’t get that amount of points in one event this whole summer. To get that opportunity when there is no Built Ford Tough going on, you have to take advantage of the opportunity given to you.”

300 points is the equivalent to winning a round at the 2017 Built Ford Tough World Finals.

Other Top 35 riders competing in Quebec on Friday and Saturday include No. 4 Derek Kolbaba, No. 5 Chase Outlaw, No. 6 Jess Lockwood, No. 21 Fabiano Vieira and No. 35 Brennon Eldred.

Triplett is 1,495 points behind world leader Eduardo Aparecido after going 20-for-45 through 15 BFTS events.

His 44.44-percent riding percentage is the best of his career, and Triplett also has seven Top-10 finishes to go along with his victory in Sioux Falls, South Dakota.

The summer is more so about staying in tune for the stretch run to the World Finals vs. making a big push in the standings, says Triplett.

“That thought is not even in my mind,” Triplett said. “I am just trying to stay focused on one bull at a time and not get really into all the points and stuff that comes with it. That is when I tend to overly try. I am just going to go at it like it is going to be an enjoyable summer and I am just going to ride them jump for jump and have fun.”

Triplett is thrilled to even have the opportunity to go travel and compete this summer.

Last year, Triplett was recovering from left shoulder surgery, and a sprained riding wrist cost him six weeks of the 2015 summer run when he was No. 2 in the world standings.

“I’ve had two summers I have had to sit out, so, yeah, I am pumped,” he said. “There are a lot of events. All of the stuff that goes with the Built Ford Tough, these are the events to go have fun and relax and remember why we ride bulls.

“You keep it easy and it gets you tuned up for the second half of the season.”