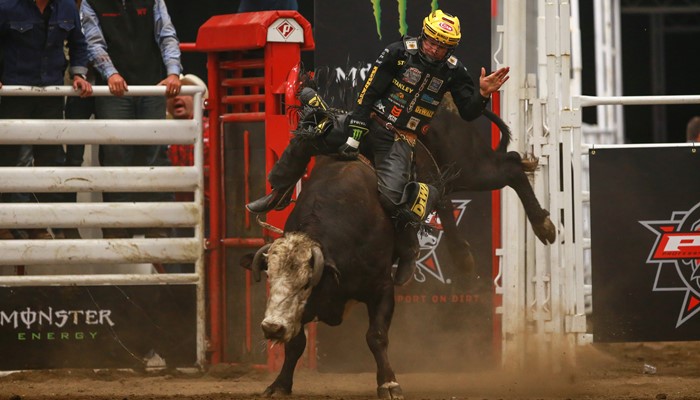 In Round 1 Triplett rode Body Special (Outlaw Buckers Rodeo Corp) for 85 points for the win. In the championship round, the current No.8 man in the PBR World Standings put up 86.5 points on Shakin’ Hands to tie for second.

Overall, Triplett edged second place Edgar Durazo (Montezuma, Sonora, Mexico) by a single point to earn $3,692.17 and 60 world points. Durazo put together scores of 84 in Round 1 on Whiskey Hand (Vold/Prescott) and 86.5 points on Mr. Sunshine in the championship round to take home $2,789.08 and 30 world points.

Third on the night went to DeWinton, Alberta’s Brock Radford. After scores of 81.5 on Gran Torino (Girletz Rodeo Stock) in Round 1 and 87 on Case Closed (Outlaw Buckers Rodeo Corp) in the championship round the former No.8 man in the PBR Canada standings is set for another jump. For his work, Radford earned $1,806.24 and 20 world points.

Canada’s top man in the PBR World Standings as of today, Dakota Buttar finished in the fourth spot in Calgary on Wednesday. Buttar put up 83.5 points on Lace Up (Girletz Rodeo Stock) in Round 1 but was bucked off Moves Like Pozzy (Vold/Prescott) in the final round. Coming into Wednesday, Buttar had no points in the PBR Canada National Standings, leaving Stampede Park he takes home $1,062.50 and 15 world points.

Rounding out the top six in Calgary were Cody Coverchuk (Meadow Lake, Saskatchewan) and Cody Casper (Pacific, Washington) in fifth and sixth respectively. Coverchuk went 1-for-2 thanks to 83 points on Whiskey Throttle (Outlaw Buckers Rodeo Corp) in Round 1 to earn $605.63 and 10 world points. Casper scored 82.5 points on Oklahoma Blue (Girletz Rodeo Stock) in Round 1 however was bucked off Stunt Man Ray (Girletz Rodeo Stock) in the championship round.

Next up on the 2017 PBR Canada Touring Pro Division schedule is the Wanham Plowing Match PBR Extravaganza on Friday June 16th, 2017 starting at 7:30pm.

Official results from the Global Petroleum Show PBR at the Agrium Western Events Centre at Stampede Park in Calgary, AB on June 14th, 2017.