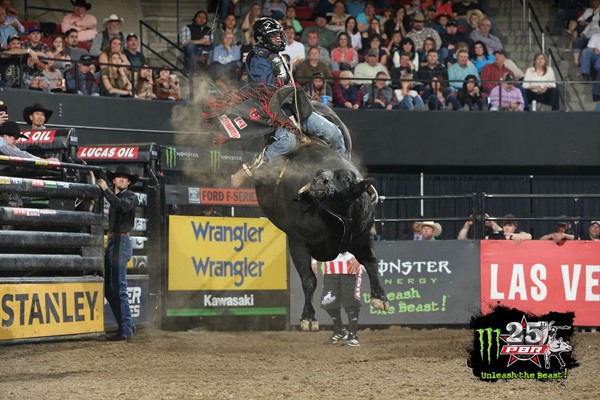 Tanner Byrne returns to the elite tour this weekend after missing the Columbus Invitational. Photo by Andy Watson/BullStockMedia.com.

NEW YORK CITY – This weekend, the first half of the 2018 season for the elite 25th PBR: Unleash The Beast will conclude in Las Vegas, Nevada, at the famed Thomas & Mack Center with the Last Cowboy Standing, presented by Ariat.

Each of the 40 riders in the draw will attempt one bull in Round 1, advancing to the next round if he makes the 8. If he gets bucked off, however, he is finished.

This weekend Dakota Buttar, Brock Radford and Tanner Byrne will all represent the Maple Leaf as each will look to become the first Canadian to win a PBR Major since they launched in 2015.

Buttar heads to Sin City after reaching a career milestone last weekend in Columbus. Propelling him to a second place finish, his best thus far of the season, Buttar recorded his first 90-point ride on the elite tour when he covered K-C Bucking Bulls/Spark-lin Acres’ Inferno for 90 points in the Championship Round.

“I am pretty excited about that,” Buttar said. “Tanner and Jordan Hansen got on him earlier this year. I had seen him a couple of times. He is around to the left, but he has a little bit of a hold to him. He pulled them both into the well, so I kind of new that was going to come, so I kicked loose to stay out of there.”

While Buttar faced this format earlier in the season at Iron Cowboy in Arlington, Texas, where he was sixth, it will mark his debut Last Cowboy Standing, sidelined last year with a torn ligament in his riding elbow.

In Round 1, he will face Dakota Rodeo/Chad Berger/Clay Struve/Heald Pro Bulls’ Get Shorty. The bull has been ridden once, by Dener Barbosa for 84.5 points during Round 4 of the 2017 PBR World Finals, in 13 attempts. Dispatching the last five riders who have attempted him, Get Shorty most recently bucked off Lawson Nobbs in 3.83 seconds in Billings, Montana.

Also set to make his debut at Last Cowboy Standing is young-gun Radford. After recoding qualified rides at the past two elite tour events, the 22-year-old was shutout in Columbus, unable to make the 8 on Cornwell Bucking Bulls/White Trash Buckers/Pink Cattle Co.’s Pink Cadillac (Round 1 – 3.4 seconds) and Mike Miller Bucking Bulls’ Gubber (Round 2 – 4.61 seconds).

Inside the Thomas & Mack Center, Radford will attempt Owens/Wyatt’s Big Show in the first round. Unridden in his last two outs, Big Show bucked off Keyshawn Whitehorse in 4.8 seconds in Glendale, and Rubens Barbosa in 2.86 seconds most recently in Sioux Falls.  Cody Teel was the last rider to make the 8 on the bull, covering him for 86.25 points in Albuquerque.

Radford is currently ranked No. 41 in the world, 65 points outside of the Top 35 and a permanent place on the elite 25th PBR: Unleash The Beast.

Sidelined last weekend, Byrne will return to action this weekend ranked No. 23 in the standings, 1,888.33 points off the world lead. Much like his two countrymen, Byrne also did not ride at this event last season as he continued to rehab a groin injury.

To begin the event, he will attempt Talbert Bucking Bulls’ Little Texas in Round 1. In his last out, Emilio Resende made the 8 on him for 88.25 points in Little Rock.

In the bull pen, four bovine athletes with ties to the nation will compete, including Midnight Rain and Pennywise, now owned by Chad Berger, both set to buck at their second elite tour event.

In response to fan demand, this year’s Last Cowboy Standing will be aired LIVE on CBS Sports Network, with a one-hour highlights special set to be aired on CBS. The weekend’s programming will begin on Friday, May 4 at 10:30 p.m. ET with the “Inside The Majors” pre-show, followed by the LIVE event telecast at 11:00 p.m. ET. On Saturday, May 5 CBS Sports Network will go LIVE from Las Vegas for the final day of action beginning at 11:00 p.m. ET. On Sunday, May 6, at 1:00 p.m. ET, CBS will air the one-hour, “Best of Last Cowboy Standing” highlight special.

Fans will be able to watch the action in its entirety, live, via PBR’s new streaming digital platform RidePass. The stream for the two-day Major event will begin on Friday, May 4 at 10:45 p.m. ET, and Sunday, May 5 at 10:45 p.m. ET. On-demand replays will be available at 8:00 a.m. ET the next day at www.ridepass.com. The service can be found at www.ridepass.com, and in the Apple App and Google Play stores under the listing of RidePass.