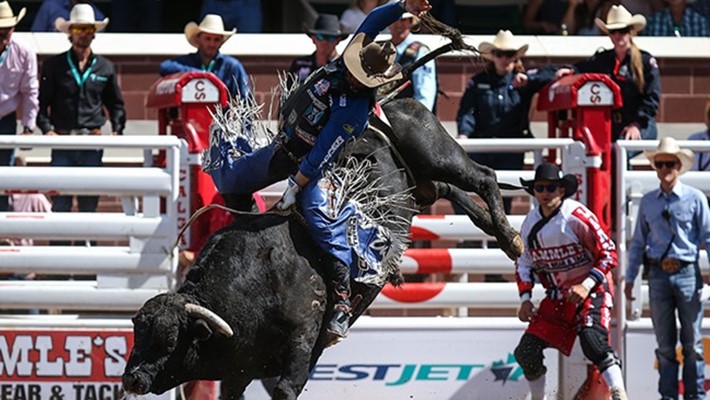 Cody Nance went 3-for-4 to win Pool B at the Calgary Stampede. Photo: Covy Moore/CovyMoore.com.

PUEBLO, Colo. – The highest-ranking American in the PBR world standings is now the top American PBR rider at the Calgary Stampede.

No. 4 Cody Nance rode his third consecutive bull at the Calgary Stampede on Friday afternoon, covering the 2,100-pound bull Walk Away for 87 points.

Nance was able to hang onto his bull rope by the edge of the fingers on his left hand despite starting to lose his grip at 5 seconds.

The 30-year-old benefitted from Walk Away turning into his riding hand as well.

“He was so big,” Nance told PBR Canada’s Ted Stovin. “They may need to make the chutes bigger for him, but nah he was good. Zane Lambert said that is one you really want. He said, ‘He was going to really buck.’

“A lot of Canadians up here really, really love him, but not a lot of people get by him a whole lot. He bucked Chase (Outlaw) off the other day and went right. He stepped ahead of him and pulled the rope out of his hand. That happens sometimes. Fortunately I was able to hang on to my rope. At about 5 seconds it was starting to slip on me. It is so hot, and my rosin was getting gooey. I managed to hang on to him. He turned back to the left today and went into my hand. That was pretty nice. It wasn’t expected, but it worked out thankfully.”

The second-place finish in the final round of competition helped earn Nance the Pool B victory overall.

“So far I am 3-1,” Nance said. “I am a little disappointed because I bucked off that first one. I can’t hang my head. I did what I said I was going to do. I said I was going to come back and ride all of my bulls through. So far so good. We have Sunday. Praise God. I am thankful for that and I am ready.”

International fans living outside of Canada can watch the 2018 Calgary Stampede on RidePass every day beginning at 3:15 p.m. ET.

Nance has been surging up the standings all week in Calgary after bucking off Canadian Outlaw on Tuesday.

The Paris, Tennessee, native rode Gangster’s Paradise for 75.5 points on Wednesday and Lil Shorty for 87.5 points on Thursday.

Nance beat out four-time PRCA champion Sage Kimzey by $500 for the Pool B victory.

The tiebreaker at the Calgary Stampede pool play was the most-money earned in a single-day of competition.

Joe Frost was the winner of Pool A at the Calgary Stampede.

11 riders will battle for the final two draw spots for Showdown Sunday during Wild Card Saturday.

Jared Parsonage did not compete on Friday because of an injury.

His 26 qualified rides on the premier series is tops in the PBR.

Nance would have liked to win a round during Pool B, but he is thinking about the $100,000 prize that is available on Sunday afternoon at the Greatest Outdoor Show on Earth.

“I didn’t get one of them bronzes, but I am looking for the long-term win,” Nance said. “Any chance you get to ride at any bull riding or rodeo for $100,000, it makes you step your game up a little bit because it is such a big prize to win. It is cool rodeo has gotten to that level where we can make a living. So we just bear down and try like we can. This is what we do and try to make our job happen.”