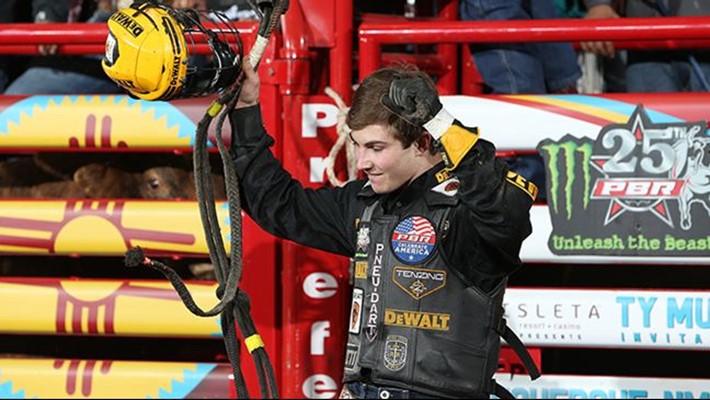 Jess Lockwood will compete in Pool B at the Calgary Stampede. Photo: Andy Watson/BullStockMedia.com.

PUEBLO, Colo. – Reigning PBR World Champion Jess Lockwood has been taking in the sights and sounds of the Calgary Stampede this week, but once he climbs into the bucking chute on Tuesday afternoon, Lockwood’s second trip to the Greatest Show on Earth will be far from fun and games.

Lockwood has the opportunity this week in Calgary to add another historical victory to his resume when he begins his pursuit of Calgary Stampede’s $100,000 paycheck with the beginning of Pool B competition.

Lockwood has had an up-and-down season as the defending World Champion, but he has also won two of the most prestigious non-premier series events on the calendar with RFD-TV’s THE AMERICAN and Chad Berger’s $100,000 Match of Champions.

“If I can win Calgary, that would be a lifelong dream,” Lockwood said last month. “That is on my goals. If I retire from the PBR and I still haven’t won, I will keep going if I am invited until I am 30.”

The third-year pro has won the second-most money in the PBR this season with over $278,000 – $175,000 coming from his two victories at THE AMERICAN and Berger’s Bismarck, North Dakota event.

“I like it,” Lockwood said. “You can’t just ride your bulls and expect to move on. You have to get round wins and stuff. It is kind of like making a bull riding event, not just a staying on event.”

Parsonage has replaced Trey Benton III in Pool B.

Mauney and Kimzey are both attempting to become the first bull rider to win three Calgary Stampede titles.

Lockwood nearly beat out Kimzey for the title last year, but wound up bucking off Johnny Ringo in the final round.

The Volborg, Montana, bull rider was 4-for-6 at his first appearance at the Calgary Stampede and averaged 89 points per ride.

“It is just an old cowboy event,” Lockwood said. “If you win that, it is pretty prestigious and you are a pretty damn good cowboy. Not just a bull rider. It is one of the coolest, biggest rodeo events in the entire world.”

The 20-year-old then built off that win by going 2-for-2 to win the Sheridan, Wyoming, Touring Pro Division event.

Lockwood has taken the last two weeks off to rest his injured riding hand, which has been an on-again, off-again nuisance this year for the third-year pro.

Whether it was the PBR World Finals last year when Lockwood began with a PBR-record three consecutive round wins, his PBR Major victory in New York City last year or his two massive paydays this season, Lockwood has seemingly thrived in primetime.

“When the stakes are higher, and there is more pressure on you, it motivates me,” Lockwood said. “This past year, the better (the stakes), the better I ride.”

Lockwood has been rushed into the limelight from the moment he debuted as an 18-year-old in Sioux Falls, South Dakota, two years ago.

Instead of cowering away from the cameras, he has learned how to thrive in front of them.

“It just motivates me. It fires me up.”