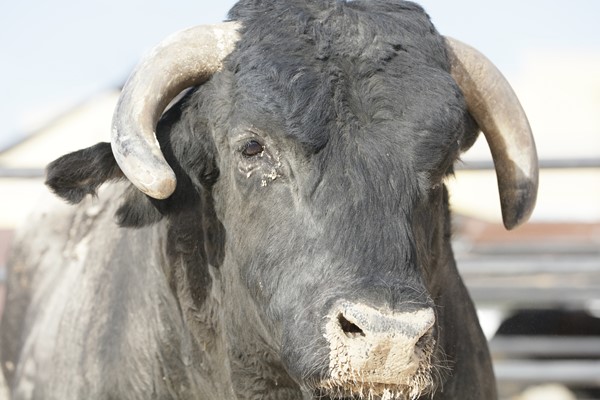 Seven Dust has been a PBR World Champion Bucking Bull Contender for the past three seasons. Photo by Andy Watson / BullStockMedia

CALGARY, Alberta – Thus far in 2018, through the first three events of the elite 25th PBR: Unleash season, not only has the league’s top series seen numerous Canadian riders have dominant performances, but more than 10 bulls with connections to the nation have established themselves as bovine athletes to watch.

The wave of bull power from North of the 49th is due large in part to the numerous sales of Canadian bucking bulls to United States-based stock contractors during the past three years.

Within that time window, six Canadian bulls have made eight appearances in the Championship Round of the PBR World Finals, headlined by Seven Dust, a staple in the final round all three seasons. The other five outs are represented by: Sheep Creek and Kill the Lights in 2015; Nailed and Hey Jack in 2016; and Canadian Mist in 2017.

Sheep Creek was raised by Tyler Thomson in Black Diamond, Alberta and bucked under the Big Stone Rodeo brand before heading south when they were purchased by Gene Owen. Following his 2015 PBR World Finals debut, where he bucked off both Dave Mason, 3.61 seconds/42.75 points, and Ben Jones, 4.47 seconds/44.75 points, the bovine athlete bucked at nine elite tour events, selected for four championship rounds, and was ridden just four times. In 2017, he returned to Canada where he is now under the Vold Rodeo Co. banner.

Also at the 2015 PBR World Finals, where he was a perfect 2-for-2 in dispatching J.W. Harris, 1.21 seconds/44.75 points, and Kaique Pacheco, 7.65 seconds, Kill the Lights, hailed from Todd Braithwaite and Braithwaite Ranches before he was purchased by Owen. In 2016, he bucked at four elite tour events, ridden just once by Pacheco in Thackerville, Oklahoma, where the duo combined for 87.25 points.

Another acquisition by Owen, the late Hey Jack traced his roots to the Wild Hoggs with ranches in Nanton and Marwayne, Alberta. Before relocating south of the border, the bovine athlete was named both the 2015 PBR Canada Bull of the Year and 2015 PBR Canada Bull of the Finals. After making his elite tour debut in Billings, Montana in 2016, with a 1.7-second buckoff of Wallace de Oliveira, the bull concluded his career with a 17-5 record on the premier series.

Among the bulls to have bucked in the final round of the most prestigious event in bull riding, Seven Dust, Nailed and Canadian Mist remain active on the elite tour.

With 38 outs on the elite tour, Seven Dust leads the bucking Canadian contingent of bulls for most appearances. Ridden just twice across all his trips, the bull that now calls Big Cabin, Oklahoma home has bucked off the last seven riders who have attempted him.

Since making his elite tour debut at the 2015 PBR World Finals, Seven Dust has returned to the most prestigious event in bull riding the past two seasons bucking in both the second and championship rounds. His high-marked bull score came at the 2017 Iron Cowboy, a PBR Major event, in Arlington, Texas, where he earned 46 points for dispatching Matt Triplett at the 3.67-second mark.

Bucking twice thus far in 2018, Seven Dust has also recorded the top bull score amongst all Canadian bulls this season. Earning the YETI “Built for the Wild” Bull of the Event honors, Seven Dust was marked 45.75 points for bucking off reigning World Champion Jess Lockwood at the 5.8-second mark during the 15/15 Bucking Battle in New York City.

For Canadian Mist and fellow Alberta-born bull Bad Touch, neither bovine athlete has yet to be covered on the elite tour.

Canadian Mist made his premier series debut in Thackerville, Oklahoma, in 2017 and has since bucked off each of the five riders who have drawn him. Across those trips, two of which came during the 2017 PBR World Finals, the bull’s top marks were during Round 2 of the World Finals when he was scored 44.5 points for dispatching Shane Proctor in 2.47 seconds.

With 20 elite tour outs to his name since his first career trip in 2015 in Baltimore, Maryland, Bad Touch also remains unridden on the elite tour. The only rider to eclipse the 7-second mark on the bull was Cody Nance at the PBR Major event in Nashville, Tennessee in 2015, when he reached 7.13 seconds.

Selected to buck at the World Finals twice, Round 4 in 2015 and Round 2 in 2016, the bull now based in Mount Orab, Ohio has twice been scored a career-best 44.25 points. Most recently Bad Touch earned those marks for bucking off three-time World Champion Silvano Alves in 1.66 seconds during the Championship Round of the 2017 PBR Major event in New York City.

Stunt Man Ray and Blue Stone represent the two latest Canadian bulls to earn the opportunity to buck on the elite tour. While Stunt Man Ray is now a part of the Broken Arrow Bucking Bulls’ pen, Blue Stone, per Tanner Girletz, is currently on loan to D&H Cattle in exchange for a marquee breeding bull.

Both bulls debuted during the 2017 PBR World Finals, where they each had two outs and were covered once.

In 2018 no rider on the 25th PBR: Unleash The Beast has successfully ridden Stunt Man Ray nor Blue Stone.

This weekend, Blue Stone is the lone Canadian bull set to buck at the fourth event of the season in Sacramento, California.

Collectively, the pen of bulls bucking on the elite tour that were raised in Canada have had 23 outs to date in 2018.

New York City, Championship Round: Nailed (42 points) is ridden by Valdiron de Oliveira for 86.25 points and sixth in the round.

Chicago, Round 1: Nailed (42 points) is ridden by Marchi at 86 points to tie for fourth in the round.

While the only all Canadian matchup so far this season featured Tanner Byrne and Black Rose in New York City, those bulls currently active have faced a Canuck rider 13 times across their collective 190 outs.

For both Bad Touch and Stunt Man Ray their elite tour debut featured an all-Canadian matchup. Bad Touch bucked off Byrne at the 2.93-second mark in Baltimore, Maryland in 2015 for a bull score of 41.5 points, while Stunt Man Ray dispatched Dakota Buttar in 7.77 seconds during Round 2 of the 2017 PBR World Finals for a 43.5-point score.

In the dozen country-on-country matchups only four times has a rider earned a qualified score: