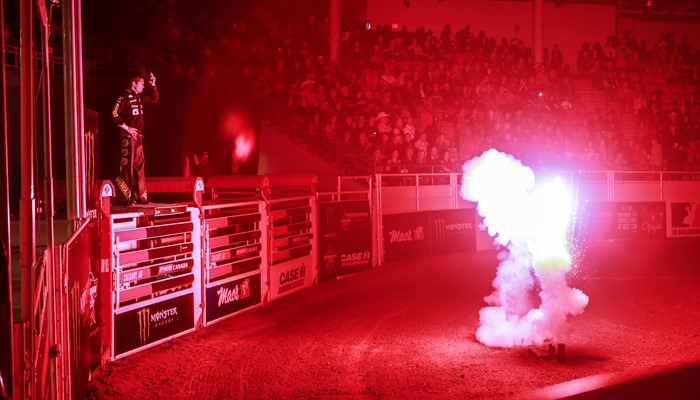 The 2018 debut of the Monster Energy Tour marks the first ever sold-out show at the Agrium Western Event Centre. Photo by Covy Moore / CovyMoore.com

CALGARY GETS RANK – This weekend PBR Canada’s Monster Energy Tour, presented locally by Mac’s and Circle K stops in Calgary, Alberta at the Agrium Western Events Center on Stampede Park, for the season-launch of the nationally-televised, cross-nation tour. The event marks the second-time the tour has visited Alberta’s largest city. Marking the first event of the series’ third season, the Monster Energy Tour last visited Calgary in 2016, its inaugural year.

SOLD OUT STATUS – Before the first bull bucked at this weekend’s season-launch event, the 2018 stop in Calgary made history as the first event to sell-out inside the Agrium Western Events Centre on Stampede Park. Also marking the first sell-out in the tour’s three-year history, not a single seat will be empty when action gets underway this evening.

2017 ENDS IN HISTORIC FASHION – The 2018 Monster Energy Tour is anticipated to pick-up right where last season’s tour left off, with the fiercest battle for the PBR Canada Championship in league history coming down to the last outs of the Canadian Finals. After trailing No. 1 Brock Radford by more than 500 points coming into the final day of competition, Zane Lambert made a come-from-behind surge to surpass the young gun and claim both his second Canadian Finals event win and Canadian Championship. Lambert is now the second rider in history to hold multiple national titles, joining Aaron Roy (2008, 2010 and 2012), and first rider to win the Finals event in multiple seasons, let alone back-to-back years.

SO FAR THIS SEASON – While the Calgary event will mark the start of the 2018 Monster Energy Tour, the Canadian Touring Pro Division got underway at the start of March, holding events in Lethbridge and Teepee Creek. Meeting Creek, Alberta’s Garrett Green won the first event in Lethbridge, propelled to victory by a perfect 2-for-2 performance. Taking the title the following weekend in Teepee Creek was Maple Creek, Saskatchewan’s Jared Parsonage, also earned via a flawless 2-for-2 outing. Brock Radford, who was third and second at the events, respectively, leads the Canadian national standings heading into this weekend’s event, 80.84 points ahead of No. 2 Parsonage, and 82.5 points in front of No. 3 Green.

PAST EVENT WINNERS – Missouri’s Brady Sims won the inaugural event in 2016, delivering an 86.5-point ride on Shot of Whiskey in Round 1 and an 89-point trip aboard Heaven’s Basement in Round 2. Saskatchewan’s Cody Coverchuk, who concluded the 2017 season ranked No. 5 in the Canadian standings, finished fifth, while No.8 Jared Parsonage finished sixth.

ABBI CLASSIC ROUND – For the first time this season, the Monster Energy Tour will include an ABBI Classic round. To be eligible to compete in any ABBI produced or sanctioned Classic event, bulls must be at least three years of age, but no older than four. A total of 25 of the 30 bulls in Round 1 will compete.

BULL PEN – Headlining this weekend’s pen of bulls is former PBR Canada Bull of the Year Minion Stuart of Skori Bucking Bulls. Having bucked at the 2017 PBR World Finals, covered by Mason Lowe for 87.5 points in Round 1, the bovine athlete carries a four out buckoff streak into the event. Most recently, in Lethbridge, Alberta, Minion Stuart put up matching 43-point bull scores for dispatching Garrett Green at the 6.5-second mark and Dayton Johnston in 3.7 seconds. One of three bulls from the stock company, their contingent also includes Gunned Down and Snap Shot. Home province, as well as two-time and reigning PBR Canada Stock Contractor of the Year, Nansen Vold will have the most bulls bucking under the Vold Rodeo banner in Calgary. His pen of eight includes Whiskey Hand, Papa’s Rockstar and The Silence. Finally, PBR World Finals bucking bull Happy Camper from Two Bit Bucking Bulls will compete in Round 1’s ABBI Classic after a championship season as a three-year-old bull in 2017.

THIS WEEKEND’S FORMAT – The Monster Energy Tour will feature two rounds of bull riding. Each of the 30 competing riders will get on one bull in Round 1 on Saturday. The Top 10 ranked bull riders will then advance to the Championship Round later that evening. Riders will be competing for valuable points towards the PBR Canada national standings and PBR world standings, in addition to $15,000 in prize money. On the line this weekend are 550 Canadian and 120 world points.

NEXT UP – PBR Canada’s Monster Energy tour will take more than a one month break before traveling to Ottawa, Ontario and the Canadian Tire Centre on Saturday, May 12 for the second event of the season. The event, set to begin at 7:00 p.m. ET.