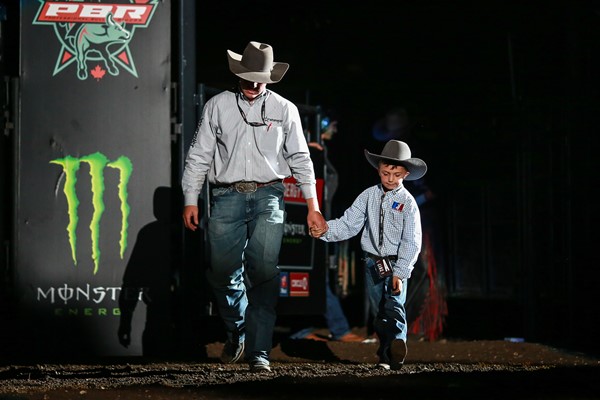 Nansen Vold and his son Jayden accept the award as 2017 PBR Canada Stock Contractor of the Year. Photo by Covy Moore / CovyMoore.com

CALGARY, Alberta – Before 2017 PBR Canada Stock Contractor of the Year Nansen Vold accepted his award at the PBR Canada Finals in Saskatoon, he paused, waiting for his son Jayden to run down from the stands to join him in the spotlight.

“He ran down from the stands to come out there with me,” Nansen said of his son when it was time to accept the award. “It was good, he was tickled pink. It’s good to have your kid and family there.”

Looking on from the stands were Nansen’s wife, Jennifer, and daughter, Cheyanna, both thankful for the honor, which for Vold, was the third time the bull riders of PBR Canada has voted him the recipient.

Vold, a family-centric man, considers his bulls part of that unit. To see the intersection of his two passions, bucking bulls and family, one has to look no further than the names of his bovine athletes.

Cooper Tonneson, Vold’s step-brother, passed away two years ago at the age of 19. In remembrance, Vold headed out to the pen where he named a bull to pay tribute and celebrate a member of his family who has passed.

And he wanted to find the best one of the bunch.

While Cooper’s Comet may no longer buck under the Vold Rodeo banner in Canada, he’s since gone on to make two appearances at the PBR World Finals under new ownership.

“It’s just about as exciting as being there yourself owning them. That’s what I’ve always found. I get more of a joy to that sometimes, they are at the biggest stage when it comes to bull riding,” Vold said of watching Cooper’s Comet and his other stateside bulls competing at the sport’s most prestigious event. “They say they come off your ranch or they were home raised or they were bought, they were part of our program, it’s humbling to watch for sure.”

Recently, the former Vold contingent bucking on the elite 25th PBR: Unleash The Beast, has expanded with Black Rose, Nailed, Road Rage, 2017 PBR Canada Bull of the Year Johnny Ringo and Canadian Mist, all of whom now call the Lower 48 home, tour regulars.

“The top end of our pen has actually been gone so a guy has had to rely on some younger bulls to pick up the slack and I made a couple purchases to fill the void,” Vold said of his Canadian pen. “It was a good move on our end I think and it gets our name out there down south. They are making a showcase down there, especially Canadian Mist, he’s been really doing well.

“And people start talking about it, and when you’ve got one to sell again, it’s a little easier. You can say we’ve done it before and it’s worked. If you can’t play the game down there, you might as well play the game in the sense of having some stock there that we’ve sold.”

His veteran bulls too are the ones to which Vold credits his latest Stock Contractor of the Year award.

“I think the old pen I’d call it,” Vold said. “Like Corona Time and Heaven’s Basement.

“We went out and bought some bulls that last year too, we bought 174 Blow Me Away. He was a new add-on to the pen that really showcased his stuff all year and I was very happy with him for sure. Bringing back [PBR World Finals Qualifier] Sheep Creek, was good I think. All the guys liked him.

“We had some good bulls go south that year before, Nailed and Cooper’s Comet left our pen so it’s good to know that we can still keep up and make some purchases and raise some too and keep our pen as strong as it was last year, and again this year.

“I think it’s going to look as good as ever so we are pretty fortunate for that.”

This year, Vold looks to the up-and-comers like Whiskey Hand to lead his contingent.

“He was showcased very well at the Global Cup, he’s my go-to bull for this year for sure. He will be in every short round in the PBR,” Vold said.

“He’s looking very good,” Vold said. “That’s going to be another go-to bull for us for sure. They are both five-year-olds and we’ve got the most four-year-olds I’ve ever had coming up from raising them to Prescott’s [Ty and Barry] have helped us out lots. They have a program too that’s involved with our deal.”

While Vold raises a number of bulls each year, he also buys many from local producers of the top bucking stock both globally and in Canada.

“We are fortunate having so many guys that raise them that I’ve dealt with,” Vold said. “Between Nate Gardner [Rafter G Cattle Co.], Brodie Mounkes, Tyler Thomson [Dynamite Buckers]. It’s good to have those four or five guys raising them that I can count on to purchase and make our program where we are at today.”

“Burke has always got bulls for sale,” Vold said. “One year I went out and bought four or five of them and that’s where Heaven’s Basement came from and that’s also where Black Rose is from. He’s done very well too. We haven’t purchased any lately but I know he’s got some coming to Calgary this weekend so I’ll be watching them for sure.”

“It’s always an honor to win that award. It’s what we do as contactors every year, bring the best stock for the riders and I guess it paid off,” Nansen concluded.