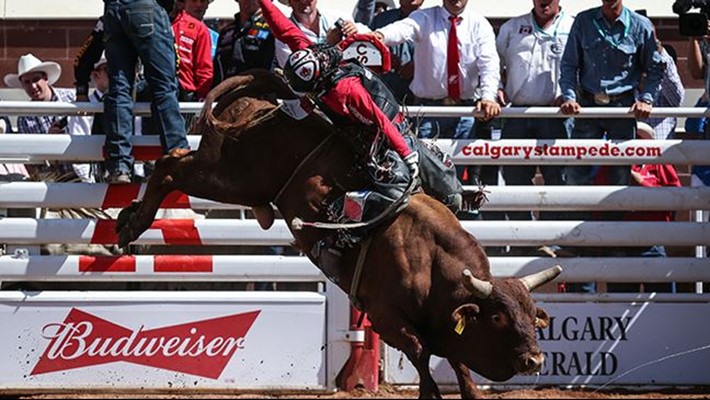 Lambert rode Ivy League for 88 points to win the second day of Pool B competition at the Calgary Stampede.

The reigning PBR Canada Champion bull rider has been dealing with an on-going lower back injury that flared up on May 26 at the PBR Canada Monster Energy event in Halifax, Nova Scotia.

Lambert had taken off two weeks off until placing ninth at the Ponoka Stampede and fourth at the PBR Canada event in Kelowna, British Columbia, last weekend.

The 32-year-old earned $5,500 CAN for the round win Wednesday at the Calgary Stampede, and he moved into a tie for second place with day one winner Derek Kolbaba, who was bucked off by Scorpion in 7.09 seconds on Wednesday.

Lambert – a two-time PBR Canada champion – is now right back in the mix of advancing to Showdown Sunday despite his buckoff Tuesday against Mr. Legit.

The veteran bull rider has been competing in both PBR Canada and the Canadian Professional Rodeo Association this year.

2017 PBR World Champion Jess Lockwood also bounced back from his day one buckoff by riding Blind Spot for 85.5 points and a $4,500 paycheck.

Lockwood is tied with two-time World Champion J.B. Mauney, who was bucked off by All Business, for fourth-place in the Pool B standings.

The four-time PRCA champion is the only bull rider to cover both of his bulls in Pool B. Kimzey leads Pool B with $6,000 heading into Thursday’s performance.

Marcos Gloria (83 points on Lightning McQueen) and Cody Nance (75.5 points on Gangsters Paradise) were the only other riders to reach 8 seconds Wednesday.

Fans can relive all the action from the second day of Pool B competition Thursday at 10 a.m. ET on CBS Sports Network.