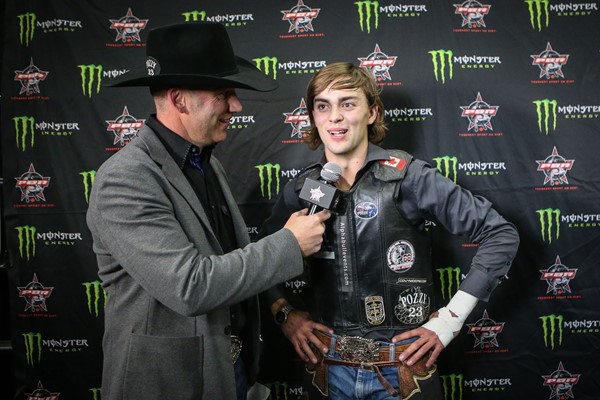 CALGARY, Alberta – For being just 22 years-old, Lonnie West holds the persona of a veteran in the bull riding world.

Since the day he was born, West has been fully immersed in the rodeo and bull riding world. Following in the footsteps of West’s father, Kevin, who won the Calgary Stampede’s then $50,000 bonus in 1989, Lonnie is one of three bull riding brothers, joined by his oldest sibling, Billy, 24, and Bryce, 19.

Throughout their childhood, the trio of brothers has racked up numerous accolades.

In 2008, Lonnie was the Steer Riding Champion at the Calgary Stampede, and went on to win Rookie of the Year in the Canadian Professional Rodeo Association (CPRA) in 2015. In winning the award, it marked the second consecutive year a West took the honor, with Billy named the association’s Rookie of the Year in 2014.

In the award’s history, which dates to 1970, this is the only instance of brothers winning in back-to-back years, let alone is the same event for an award that can be won by members of any rodeo discipline.

All three brothers have held PBR memberships, however, 2018 marks the first year all three will have the opportunity to hit the road together.

“[Billy] got his shoulder fixed for the second time mid-December so I think he’s shooting to be back around [the end of June].”

“It’s been a long time since we’ve all left the same yard and been able to hit the same [events].”

“Me and Billy are living together now and I think Bryce is wanting to move into the house too so there will be three West’s leaving the same yard going to rodeos which is going to be bad ass.”

At present, Lonnie is currently tied for the No.38 position in the PBR’s world standings, eagerly awaiting his first call up to the elite 25th PBR: Unleash the Beast, the premier level of competition in the sport of bull riding.

“I know, frick I wish I could have hit a couple more,” West said of his current ranking as the tour heads into the fifth event of the season, and the 2018 standings start to come into effect.
“It would have been nice to win, like if I would have won another one some place I might be sitting real good, but we’re still going to go for it anyways.”

“That would have been nice,” West said of the win which was worth 80 world points as opposed to the now 120 garnered by an event winner.

After spending the past couple weeks home in Canada working, West will head back south to the RVT on Feb. 3 for the Grand Rapids Classic in Grand Rapids, Michigan, followed by the Youngstown Invitational on Feb. 9-10 in Youngstown, Ohio.

“I think Justin Lloyd was saying he wanted to stay down there for the week and rent a house for cheap, then I think we’re going to come back right after that for Red Deer and the Xtreme Bulls.”

Two weeks after the CPRA event in Red Deer, West will have the first opportunity of the 2018 PBR season to compete on home soil when the Canadian Touring Pro Division (TPD) holds back-to-back events in Lethbridge, Alberta on March 2-3 and then in Teepee Creek, Alberta on March 10.

Then, just two short weeks after that, the Monster Energy Tour (MET) will kick off its 2018 slate of events in Calgary on March 24.

With the heavy schedule not far off, West is picking his battles.

“I haven’t been on anything since we come back up, I didn’t want to hurt my groin anymore, I just stretched it, there wasn’t a tear or nothing, but I feel good,” West said.

His injury came during a four event push stateside with his best effort coming in Fort Worth, Texas at a Touring Pro Division event where he was ninth.

“If I had to go right now, I’d go for sure. I had my bags packed all week waiting for a call for Sacramento just because there’s so many guys hurt right now. Brock [Radford] called me and said just have your shit ready. They were going down the list so much, but I never got the call.”

Radford had the opportunity to continue his run on the 25th PBR: Unleash the Beast however chose to take the week off and rest.

“It’s pretty early in the season to be battling injuries, that’s why I got out,” West said.

“It’d be different if It was in the summertime when a guy’s got to go, but right now you kind of want to take care of yourself.”

“It’s a shitty decision, but he could go to one more event and risk it, but I don’t know, I think I would be on the safe side too,” West said of Radford’s decision to rest.

“But it is getting hard. Guys are running out of time to get on tour at this time of year, that push is almost getting over there. Because those guys rack up so many points at those events, you’ve got to be hitting them right off the bat.”

West finished the 2017 season No.4 in Canada and No.68 in the world. The timing of Canada’s events poises the Cadogan, Alberta bull rider for his first shot at bull riding’s highest level.

“It sets a guy up for the summer too,” West said. “You hit Lethbridge and all them in the Spring when they’re slowing down, and then there’s a load of PBR’s up here. So we’ve got a good jump on them.”

West is also jacked for the return of the Monster Energy Tour in 2018, a place where he thrived in 2017 during the season’s homestretch, taking his first event win at the season’s penultimate event in Abbotsford, British Columbia.

“That will be badass, I’m excited for those,” West said.