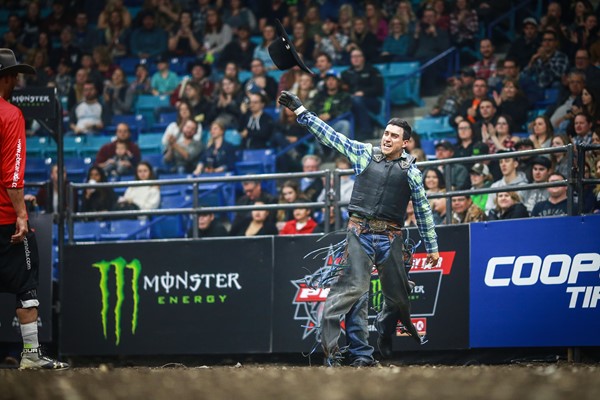 Edgar Durazo chucks his hat after riding Herf for 88 points in the Championship Round of the 2017 Monster Energy PBR Canada Finals. Photo by Covy Moore / CovyMoore.com

CALGARY – With the third season for the premier PBR Canada Monster Energy Tour set to get underway in a month’s time on March 24thin Calgary, we look back at the Top 10 moments from the 2017 season.

Coming in at No.10 is Edgar Durazo. The Moctezuma, Sonora, Mexico bull rider holds down this first entry of the countdown courtesy of splitting the event title with Zane Lambert at the 2017 PBR Canada Finals.

Inside Saskatoon’s SaskTel Centre this past October, Durazo first rode Vold Rodeo/Prescott’s Heaven’s Basement for 85.5 points to tie for fourth in Round 1.

Lambert had reached the total after covering Flying Four Bucking Bulls’ Finning Lil Shorty for 86 points in Round 1 before making the 8 aboard Vold Rodeo/Prescott’s Crooked Nose for 87.5 points in Round 2.

Collectively, Durazo earned $3,838.53 and 1,362.5 points to finish the season No.3 in the PBR Canada National Standings after entering the event ranked No.10. The stellar Canadian competitive season came on the heels of a year, 2016, where Durazo was unranked in the nation.

Since October’s PBR Canada Finals, the final Monster Energy Tour stop of 2017, Durazo has gone on to reach career milestones.

Last month, on January 13, Durazo won the first Real Time Pain Relief Velocity Tour event of his career, victorious in Portland, Oregon. A week later, he made his debut at the 25th PBR: Unleash the Beast in Oklahoma City.

In his first-ever elite tour event, Durazo finished 11th, earning 15 world points and $1,325. Since, he has competed in Sacramento, Kansas City and St. Louis. He is now ranked No.40 in the PBR world standings.

With 2018 marking his debut season at the sport’s elite level, Durazo is eligible for the Rookie of the Year title. Not only could he win that title but after a No.3 finish in Canada he’s a contender for the 2018 PBR Canada title. If he were to do that he would be only the third non-Canadian to do so. (Beau Hill - 2009, Stetson Lawrence – 2014)

Next up for Durazo is the PBR’s Iron Cowboy at the famed AT&T Stadium in Arlington, Texas. With the 25th PBR: Unleash the Beast off beginning the second week in May, look for Mexico’s talent to return to Canada indefinitely in Ottawa on May 12th.

Stay tuned later this week for the second entry in the countdown, No.9.

The Winstar World Casino and Resort Iron Cowboy, powered by Kawasaki gets underway on Saturday, February 24 at 5:50 p.m. CT.

Fans will be able to watch the action in its entirety, live, via PBR’s new OTT platform RidePass. All rounds will begin streaming on Saturday, February 24th at 6:50 p.m. ET.