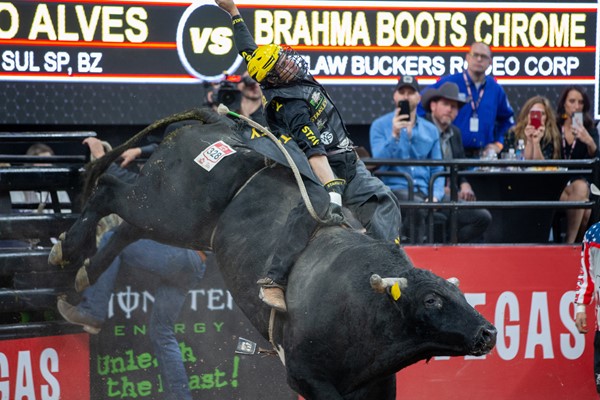 CALGARY, Alberta – Between 2002 and 2017 there were five Canadian bucking bulls to accomplish the Canadian triple crown -- a selection to the Canadian Finals Rodeo (CFR), Wrangler National Finals Rodeo (WNFR) and the PBR World Finals, all in the same season.

In 2002, Outlaw from the Calgary Stampede and Assassin from Big Stone Rodeo accomplished the feat. In 2015, Sheep Creek, also from Big Stone Rodeo, would make the trip to all three. Cooper’s Comet from Vold Rodeo did the same in 2016 while another Vold bull, in Johnny Ringo, did so in 2017.

This season, the floodgates opened, with four bulls going to all three of the major finals in the same year: VJV Whiskey Hand (Vold Rodeo); along with Red Pheasant, Nickel Package and Brahma Boots Chrome from Outlaw Buckers.

“We were talking about that the other day down there, we got four this year and no one could even remember when the last time a Canadian got four bulls there,” Curtis Sawyer of Outlaw Buckers said of the NFR. “It would have to be back in the day when Harvey [Northcott] was going and had those real good bulls.

Blackstone After Party, who was not selected to the PBR World Finals, joined his pen mates at the NFR to make up the four.

“It was very special for us,” Sawyer said. “With being a family deal, we all pitch in. To be able to go there with that many meant a lot.“

While Sawyer had previously made a trip to the NFR (2016), 2018 marked Sawyer’s first trip to the PBR World Finals.

“That was really a surprise for us,” Sawyer said. “When we got home from Pendleton I just phoned [Cody] Lambert. I just mentioned that we had been down there and had some bulls I thought would work for him. He watched some videos and he text us back and he said there was three that would be fine down there.

“It was really a surprise, but never being there before was a nice experience anyways.”

Despite being the first trip with bulls under his own company name, Sawyer had bulls travel to the World Finals with their new owners.

“Torch had went,” Sawyer said of a bull he sold to Gene Owen in 2016. “Little Kombat was a bull we raised from a calf. We sold him to Rees and Annette Smith. That bull went, he was actually in the [Championship] Round there one year.

“It was good, Lambert had enough faith in us to give us a chance.”

Leading the way for the Outlaw Buckers at all three prestigious events Brahma Boots Chrome.

“He’s had a pretty good year for an old fart,” Sawyer said. “He’s gonna be nine years old. He should be on the way downhill, but he’s holding his own.”

This season alone, three 90-plus-point rides were recorded on the black bovine athlete. Cody Teel rode Brahma Boots Chrome for 90 points in Round 3 of the PBR World Finals. Dakota Buttar put up 90 points on the bull at Ranchman’s in July and most recently, Cole Melancon tamed Chrome for 91 points in the tenth round of the NFR.

“Bob [Baird] raised him and sent him as a young bull to Duffy’s,” Sawyer said. “They started him and we got him back when he was a four-year-old. We had a pretty good run with them bulls and actually, Jason [Davidson] wanted them for Saskatoon, but for the few head that he needed I couldn’t justify going. But they could have went to all four, if we’d have wanted to go.”

Red Pheasant was who he spoke of next.

“It’s funny, when I bought them bulls from [Al] Lively. I give $30,000 for Red Pheasant, which at the time, it was kind of unheard of up here, but in one year he’s almost paid for himself already.”

These numbers may seem good, but owning bulls means having a place to keep them, where they won’t breed all the neighbor’s cows or run a rampage around the country. It also likely means tractors, feed, hoof trimming, trucks, trucking and numerous other things.

Sawyer figures it costs him $5 Canadian per day to take care of each bull.

“We’ve got 178 bulls that we can haul right now,” the former bullfighter said.

“That’s a long time ago now,” Sawyer said of his previous career. “I think I retired in 2000. Innisfail was my last rodeo. I started actually with Ike Peters in the early 90’s to get my card.

"We always had a few bulls kicking around then and just progressed from there."

“The game changer for us was buying Schellenburg’s out. It changed everything. It went from being a hobby to now on it’s a full-on business.”

In 2015 Sawyer purchase a share in Outlaw Buckers and nearly every bull he could from Rod Schellenburg.

“Before that we kicked around with a dozen, maybe 15 bulls then,” Sawyer said. “When we bought Rod out, we bought two pot loads. So there was probably 80-ish around then.”

With more than double on the ground less than four years later, things can get quite hectic – and that doesn’t include the trucking company or event steel company he also operates.

“There’s one weekend this summer in July we had I think it was 82 bulls on the road between what Deuce took, what I took, [and] Corrie took a load,” Saywer said of his son Deuce and wife Corrie. “So you’ve gotta have some numbers when you need them.

“Logistically, if it wasn’t for the family, there’s no way we could do it. Deuce and I will both take a liner load each way. Corrie now, she’ll take a gooseneck load and Bailey (Sawyer’s Daughter), she’s hauled bulls for us. She went to some CCA Rodeo’s last year and she would haul them. At any given time, all four of us could be on the road with a different set of bulls.”