Radford Returns From Down Under 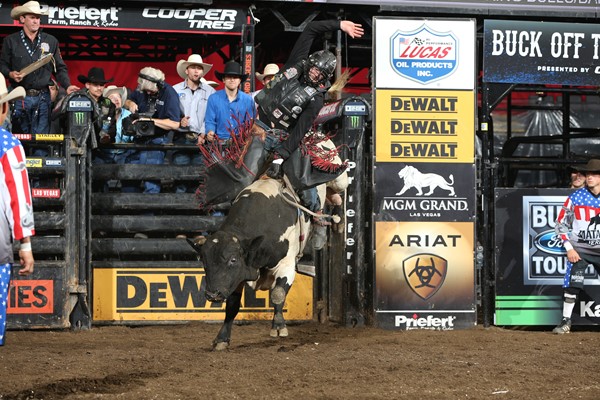 At 22 years old, the De Winton, Alberta bull rider also experienced success stateside, concluding the year ranked No. 46 in the world having made his elite tour debut, riding at the stops in Springfield, Missouri; Austin, Texas; and Uniondale, New York.

With the 2018 season already underway, Radford currently ranks No.56 the world standings early on after a visit to the PBR Australia Cup Tour.

After more than five weeks Down Under, Radford is now back on North American soil ready to begin his 2018 campaign.

“The Canadian title is definitely what I want that more than anything. Being so close to it and missing out on it sucked. It was a real shot in the gut. This year I’m going to be running and gunning for that as hard as I can, whatever I can do to win."

And his goals aren’t limited to just the Canadian tour. After getting a glimpse at what it’s like to compete on the premier series, Radford is ready to establish himself as a regular on the 25th PBR Unleash The Beast tour.

“I got a little taste of that last year and I love everything about it,” Radford said.

“I’m still a young guy, and right now is the point in my career I want to be going against the best guys in the world and the best bulls in the world.

“When I’m older I’ll go back to rodeo and do that stuff, but as of right now, when my body is healthy, my mind is good and I’m ready to go, I want to be testing myself with the best at the top level and focusing on winning Canada and getting back on that is my number one priority.”

Radford went 3-for-10, taking two other bulls to 7.7 seconds or more, with his best finish coming at the nation’s Iron Cowboy where he was fourth.

“Them last two just couldn’t get the ball rolling,” Radford said of Melbourne and Adelaide.

“Townsville it just came down to a close call for me on winning the event.

“I got called so they reviewed my short round ride and it turns out I didn’t actually make the 8. They had me at like 7.87. It cost me winning that one.

“They treat it like a [premier tour] event,” Radford said of riding at Australian events.

“You can challenge, you can hit the button. I ended up hitting the button at Melbourne on one. I was close to the whistle, but didn’t quite get that one.

“They had me at Townsville on the green but when it came back on the review it came back, they got me on time so it cost me big. I only ended up finishing fourth there, but got a good little check out of it.

“Damn sure would have been a lot nice to come home with an Iron Cowboy buckle. Next year.”

With his Dad, Max, born in Australia, Radford also took his trip as an opportunity to visit with family and friends.

“Oh yeah it was awesome. Pretty cool when you can get two birds with one stone,” Radford said.

“Last year I was at home, wasn’t even going anywhere. I might have been going to Olds practice pen and that was it. It’s definitely a jump up from where I was compared to last year.”

After his competition slate in Australia, Radford had big, almost instant, plans for his return, but opted instead to take a moment to look after himself.

“I turned out of Fort Worth and Oakland.” Radford said of his event schedule.

“It’s kinda good to be home. I’ve been going since the Global Cup pretty much, I haven’t stopped. It’s good to be home and get my feet on the ground.

“I’ll get things rolling at Denver.”

Now in Denver, Radford looks to join Coy Robbins and Todd Chotowetz on the leaderboard in Round 1 after eight qualified rides were recorded on Monday.

“I’ll meet up with Jared [Parsonage], Todd, Wacey [Finkbeiner] and head down with them boys and I’ll meet back up with Lonnie [West] and them boys,” Radford said.

“Coy and Dayton [Johnston], them guys will be coming from Fort Worth and Oakland. Bryce [West] drives the truck from Fort Worth to Denver and will meet them boys back in Denver for the PBR. Hopefully them guys can kick some ass and win some money down there and then keep the Maple Leaf rolling coming into Denver.”

With little for success in Oakland and Fort Worth for Team Canada, Denver already looks to be a better showing for the contingent with Robbins ranking third and Chotowetz fourth after the first day.

“We’ve got a pile of them,” Radford said of the Canadian contingent. “It’ll be good. We should get a couple maple leafs on the podium hopefully.”

And while Radford is focused on his goals for the upcoming season, he is ever remembering that one year ago today the sport of bull riding changed forever.

“Last year we went to Denver and you know, everyone knows the circumstances that were going on at the time of Denver last year with our friend Pozzy going,” Radford recalled.

“That was a shitty way to start our year last year and then after that happened I didn’t go anywhere until Lethbridge PBR.”

Only a couple Canadian bull riders would travel last winter, most taking the time to spend with family while dealing with the loss.

“It kind of took the wind out of everybody’s sails,” Radford said.

Looking back to January 9th, 2017, a year later is going to still be tough.

“It’s weird hey? It’s almost surreal that we are coming up on one year. It feels like it’s been way longer too. It’s gonna be weird, I don’t think I’ll ever forget Denver because I’ll never forget being in the hotel with Zane [Lambert] and Wacey when we got the call,” Radford said.

“We all cut ‘er early and booked our flights home as soon as we could. Pretty much everyone cut cinches and headed home. As soon as we found out, we all just got on our phones and the first plane tickets out of there we could book, we did. It was a shitty ordeal for everybody.”

Riders, however, won’t dwell on the date but instead use it as motivation to remember their fallen comrade.

“I’m not going to let it bring us down,” Radford said. “I’m sure all of us will go there and have some fun and ride bulls like we do for our buddy. We know he’s up there watching over us. All we can do.”