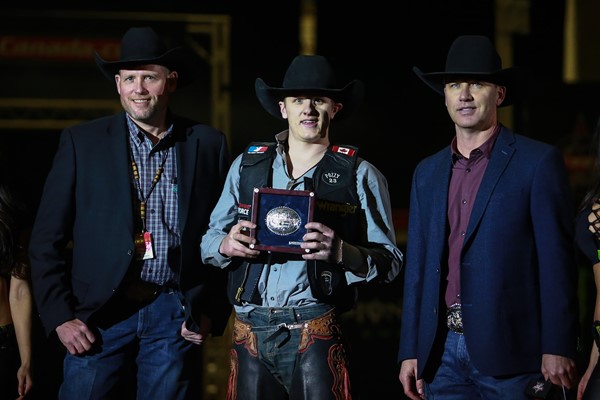 While the decision prevented the Canadian contingent from competing at the their home nation’s Touring Pro Division event in Marwayne, Alberta, it paid dividends for the De Winton, Alberta-native.

With a flawless 2-for-2 outing at the Tuacahn Amphitheatre, Radford not only captured his first event win outside of Canada, but also 60 world points, securing him a spot at this weekend’s 25th PBR: Unleash The Beast event in Tacoma, Washington.

“Yeah, it’s a good win and it got me into Tacoma this weekend,” Radford said.

“There were 120 points up in Casper and Utah was a two-day event so we could hit three events, or go to one event, and that was where our thinking was. We’d rather hit three than one. It worked out in my favor and I’ve got a good group of guys to go with, they keep my mind sound, and I feel confident when we roll up in the truck when I’m with a bunch of bad cats.”

Making two appearances on the sport’s top tour this season, riding in Chicago, Illinois and Oklahoma City, Oklahoma, Radford feels most prepared as he readies for the sixth event of his career on the Unleash The Beast.

“It feels good, shuts some people up to,” Radford said. “It’s not a fluke I’ve made it there twice now. So this time I’m just going to do what I can, and ride bulls like I do and stay there.

In his last elite tour event, Radford injured his PCL when he was bucked off Bezerk in Round 2, but credits the resulting rehab period for helping him enter this weekend’s stop in tip top physical shape.

“This time I feel like I’m the healthiest I’ve been in a long time, I’m way healthier than I was before when I was on tour. I’ve just had a good break and rested everything up.

“Those two weeks I took off for my knee after Oklahoma City, they helped me a lot, and then got a lot of confidence back up here, with obviously the past few bull ridings like Claresholm, and Teepee Creek, and Calgary.

“Them they gave me a lot of confidence because I rode all my bulls at them, pretty much, so that was a big thing for it, and I’m in fighting shape again, so let’s go.”

In Utah, Radford climbed aboard two Diamond G Rodeos bulls. His event win began with an 84.5-point trip aboard Magic Me, followed by 88 points on Northern Moxie.

“I got on this good little bull of Diamond G’s in the long round, Magic Me. A white bull around to the right and I got a good score on that,” Radford recalled.

“And I come back in on a really good short round draw of Diamond G’s, his name was Northern Moxie. I didn’t know nothing about him and right before I climbed in the chutes, I heard the announcers say they were 87 on him at Anaheim PBR, so I figured well he must be pretty good.

“He was right there to the right, and it worked out, I was 88, and got to buy my travelling partners a steak dinner in Casper.”

Alongside Radford for the trip was Logan Biever, Lonnie West and Jackson Scott. After Radford led the event following his 2-for-2 outing on the first night, which held strong to deliver him the event win, Biever led the group on the second night.

The Claresholm, Alberta-native was the next highest finished Canuck in third, earning 20 world points and $3,138.41. In Round 1 he covered Charmed Disaster for 81.5 points, followed by an 87.5-point effort on White Omega in the Championship Round. West also logged a qualified ride, making the 8 on Magic Konnection in Round 1 for 76.5 points.

“Logan Biever held the truck together that night, was 81.5 and then was 87.5 in the short round, he won third,” Radford said. “Good for him, we had a good crew.”

“Lonnie and them will go down to Des Moines here in two weeks, and I’ll go with them, but hopefully I’m going to get some stuff done this week and go to Billings, that’s my plan.”

Despite the success for the quartet in Utah, each failed to make the whistle in Wyoming.

In addition to the crucial world points, Radford also earned a paycheck for $6,741.78 USD in Utah, and what he called the “coolest prize” he’s ever won, a Rolex watch.

With the Tacoma event set for this Saturday and Sunday Radford is eager to get back to work, which will begin with an 11-hour road trip to the Evergreen State.

“I think my dad might come down with me, I was talking to him, so if he gets Friday off work, he might do the road trip down with me for the weekend.”

And once Radford arrives in Tacoma, the plan is simple.