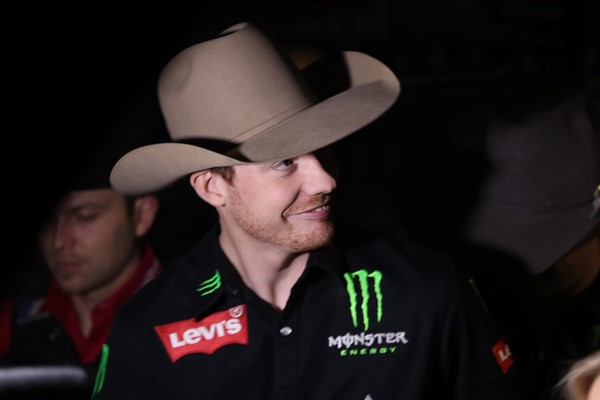 Tanner Byrne will be one of two Canadian riders competing on the elite tour this weekend in Sioux Falls. Photo: Andy Watson/Bull Stock Media.

This weekend in Sioux Falls, South Dakota for the First PREMIER Bank PREMIER Bankcard Invitational, while the Maple Leaf will still be represented, the contingent will be comprised exclusively of Dakota Buttar and Tanner Byrne.

And for the duo, the stakes are high.

Kindersley’s Buttar currently finds himself ranked No. 35 in the world, just 7.5 points ahead of No. 36 Ruger Piva. Byrne, on the other hand, is competing this weekend as an alternate, ranked No. 43 in the world, and 100 points outside of the Top 35.

In Tacoma, Buttar finished 17th, riding White Dynomite for 83 points, while Byrne concluded the stop 14th, covering Acting Crazy for 84.25 points. Of the two, Byrne was the only rider to net world points for the Top 20 effort, collecting 5 points.

As a three-day event, Buttar and Byrne will both have the opportunity to earn a maximum 900 world points in Sioux Falls, with 100 awarded to the winner in Rounds 1-3 and the championship round, and 500 given to the event winner.

A win for either rider would greatly change their present positioning in the rankings. Not including round points, an event win would propel Buttar to No. 9 in the world, while Byrne would soar to No. 11. Should either win a round, the 100 points would elevate Buttar to No. 26 and Byrne would once again be back inside the Top 35.

Buttar’s first opponent will come by the way of Buck Wild. From JD Nix Rodeo Co., the bovine athlete will be making his PBR debut.

Much the opposite, Byrne will attempt Mason’s Missouri Golden who has had 10 outs thus far in 2019, all being seen on the elite tour with the exception of his one trip at the first-ever PBR Global Cup on U.S. soil.

Making his season debut in New York City, the Chad Berger bovine athlete bucked twice, first dispatching Cannon Cravens in 1.36 seconds to earn a 43.25-point bull score, which he followed the next day with a 2.29-second buck off of Cody Nance to earn a 42.5-point score.

Dispatching the next three riders to attempt him, Colten Jesse became the first rider in the bull’s career to reach the 8-second mark, earning an 88.75-point score.

Since the qualified ride, Mason’s Missouri Golden has bucked four times, sending each rider in the quartet to the dirt prior to the whistle. In Little Rock, the bull first bested Cooper Davis in 2.03 seconds (43.5 points), only to buck off Jose Vitor Leme the very next round in 4.2 seconds (43.25 points). His two most recent trips were witnessed in Kansas City (Ezekiel Mitchell – 3.89 seconds – 43.25 points) and Tacoma (Lucas Divino – 2.19 seconds – 41.75 points).

Fans will be able to watch the action in its entirety live via PBR’s new streaming digital platform RidePass. Round 1 will be exclusively seen on the platform, with coverage beginning at 8:30pm EDT on Friday, April 5. The listen LIVE stream of Round 2 will begin on Saturday, April 6 at 7:45 p.m. EDT, while the coverage for Championship Sunday will begin at 2:45 p.m. EDT on Sunday, April 7.

In Canada, the nation’s Touring Pro Division will resume competition for the first time in a month when it stops in Marwayne, Alberta at Marwayne Arena on Saturday, April 6.

With one rider capable of earning a maximum 350 national points, fans could see a new No. 1 ranked rider in the national standings at the end of the event. While Jordan Hansen is set to compete, No. 2 Jared Parsonage (-119.17) and No. 3 Shay Marks (-337.5) are also entered and within striking distance of the top spot.

Also on the line are 60 world points. For the Top 3 riders in the national standings, a win would also inch them closer to the elite PBR Unleash The Beast.