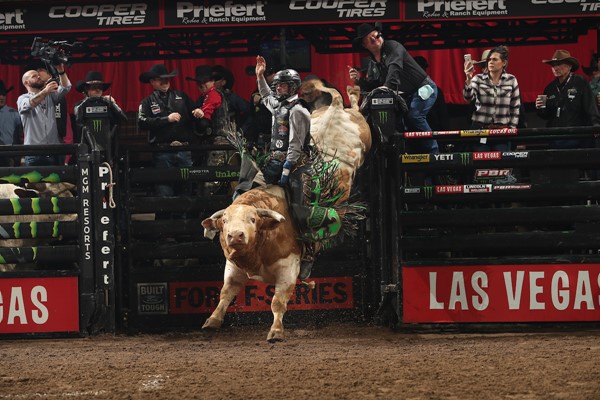 TOLEDO, Ohio – As the elite PBR Unleash The Beast prepares for its second event of the 2019 season, the Chicago Invitational at Allstate Arena, the Canadian trio of Dakota Buttar, Tanner Byrne and Lonnie West will once again travel stateside as they look for glory on the sport’s premier tour.

As the lone Canadian to ride in both the main event and 15/15 Bucking Battle in New York City, Buttar, unfortunately wasn’t able to make the 8 inside Madison Square Garden, bested by all four of his draws.

In Chicago, however, he will look to reverse his less than ideal performance at the season-launch event, and channel the success he had last year in the Windy City.

Riding Acting Crazy for 86.75 points in Round 1, and Dream Catcher for 86 points in Round 2, the Kindersley man entered the Championship Round the event leader in the aggregate in 2018.

Buttar, however, was unable to contend for the second elite tour win of his career, sidelined by a concussion and sprained neck sustained in his Round 2 get off.

This year, in Round 1 of the Chicago Invitational, he’ll face Real Gun.

In seven attempts across all levels of competition, the bovine athlete has been ridden three times. One of those riders to reach the 8 is fellow Canadian West who rode the Cord McCoy bull for 85.75 points during Round 1 in Tulsa, Oklahoma in August 2018.

Real Gun’s latest trip was in Round 2 of the 2018 PBR World Finals, earning a 40-point bull score when he matched up with Juan Carlos Contreras for an 82-point effort.

While his fellow Canadians didn’t arrive in Illinois until the weekend, Buttar was in Chicago early handling media appearances to promote the tour stop. Among his many interviews, Buttar also appeared in the celebrity puck shooting tournament at Wednesday’s Blackhawks game.

While Byrne didn’t ride in Chicago in 2018, he’ll look to continue the momentum he started last weekend in New York City.

The top finishing Canuck at the Monster Energy Buck Off at The Garden, presented by Ariat, the Prince Albert-native went 1-for-3 to conclude the event 19th. His qualified ride came aboard Brother Dave in Round 2 for 86.25 points.

Awaiting him in Round 1 of the Chicago Invitational is Underdog Hombre of Cooper Bucking Bulls. While the event will mark the bull’s debut at the elite tour level, he is unridden across two trips on the other U.S.-based tours.

Rounding out the Canadian contingent of riders is young gun West who competed for the first time in New York City since lacerating his liver during the 2018 PBR World Finals.

RELATED: West Returns to Competition at Season-Opener in NYC

The Cadogan, Alberta rider brought the New York City crowd to its feet last weekend when he rode Lightning Before Thunder for 83.25 points in Round 1. West, unable to make the 8 the remainder of the weekend, concluded his first event in the Empire State 26th.

He will attempt Corona Cartel in Round 1 inside Allstate Arena.

According to ProBullStats.com, the bull has only one trip on record, dispatching Cody Jesus in 2.24 seconds at the October elite tour event in Greensboro, North Carolina.

Fans will be able to watch the action in its entirety live via PBR’s new streaming digital platform RidePass. The listen LIVE stream will begin on Saturday, January 12 at 7:45 p.m. ET and conclude on Sunday, January 13 at 2:45pm ET.