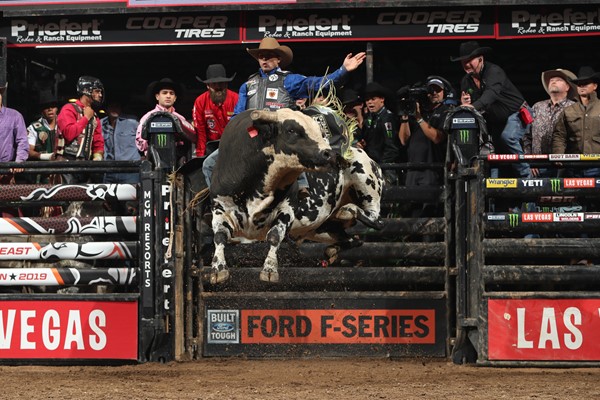 Buck Nasty was one of four bulls from Foley Bucking Bulls that competed at the Unleash The Beast's Minneapolis Invitational. Photo: Andy Watson/Bull Stock Media.

GREENSBORO, North Carolina – Last weekend in Minneapolis, if on lookers played the license plate game while the bulls unloaded into Target Center they would have seen the usual suspects --- Ohio, Oklahoma, Minnesota, and the like.

But amongst the numerous American plates, were several Alberta and Saskatchewan rigs hauling the 17 bulls from Canada from the four different stock contractors that had bovine athletes bucking inside the Target Center.

“It’s pretty cool when you pull up with a trailer load of bulls that are from Canada, and there’s guys like Kenny [McElroy] and Matt Scharping and Cord McCoy and of course Chad Berger all sitting there with their trucks unloading bulls,” James Foley of Foley Bucking Bulls explained.

From Lloydminster, Alberta, Foley had four bulls in the draw with Fired Up Freddy, Kungfu Panda, Buck Nasty and Firebeatz. After all four bulls bucked in Round 1, KungFu Panda earned a second trip in Round 2 giving the Foley Bucking Bulls outfit five trips on the sport’s top tour.

“It was good,” Foley explained. “One bull didn’t perform what I expected him to, but it was his first long trip down south. It is what it is, and they don’t perform their best all the time, just like us, so a guy can’t be mad at it, but all the Canadian bulls did good in my opinion.”

Leading his contingent was Firebeatz who earned a 42.5-point score in the opening round for his 7.73-second buckoff of 2016 PBR World Champion Cooper Davis.

“He was a standout for us,” Foley said as he continued to shine a light on the impressive outs had by the nation’s other bovine athletes. “Home Grown of the Eno’s he was in the short go and he was really good. [Tykro] Pound Sand probably had one of the best trips I’ve ever seen him have on Saturday, and Mighty Moe of Jim Thompson’s was a standout.”

From the Foley contingent, and bucking alongside Firebeatz in Round 1, Fired Up Freddy was marked 40.75 points for his 4.52-second buckoff of Junior Patrick Souza, while Buck Nasty earned a 40.5-point score for dispatching Eduardo Aparecido in 4.18 seconds, and Kungfu Panda was marked 39.75 points after bucking off 2018 PBR Rookie of the Year Keyshawn Whitehorse in 2.65 seconds. In Round 2, Kungfu Panda was later marked 36.75 points for upsetting Rubens Barbosa in 6.26 seconds.

“There were three of mine that had never been to a UTB,” Foley explained, hopeful that one will earn a bid to compete at the 2019 PBR World Finals.

Of the quartet the only bull that had experience stateside was Buck Nasty who most recently competed in Nampa, Idaho at the Unleash The Beast event in October 2018, ridden by eventual World Champion Kaique Pacheco for 87 points.

“Edmonton and Saskatoon sounds like those are our next stops,” Foley said of the upcoming PBR Canada Monster Energy Tour events. “Then we’ve got a couple of BRCs, and then hopefully find out if we’ve got anything going to Vegas, World Finals time.”

And for Foley, having his bulls compete in Vegas has been a dream a long time in the making.

“I started off buying a bull through a program the PBR put on and then started buying bulls down there [in the U.S.], and I just kind of decided one day I was going to bring them all up here [to Canada], try to make a go of things,” Foley explained.

“Since I’ve done that it’s been pretty solid. I know when I did bring them up there were a few guys that were like, ‘That’s a bad idea, it’s tough to get in here,’ and ‘you’re never going to be able to do it.’ But I think I’ve done pretty well for myself.

“Definitely you know the help of all the Canadian contractors, Justin Volz and Jim Thompson they really took me under their wing and kind of helped me get my first few events where I got to take bulls. And then now, what is it, four years later, and I’ve kind of put on the Canadian Heritage on the ABBI side of things along with the PBR, and we do Frog Lake PBR and then I’ve got a couple more irons in the fire for some more events next year.

“It isn’t easy to get in there, and it isn’t easy to stay in there, but if you have good enough bulls I guess, and you work hard enough at it, you can definitely make people open up their eyes to a new guy getting into the business.”

“I pride myself on our program in general,” Foley said further. “I feed the best feed I can buy. We train our bulls. We just set up a top of the line 2W setup this year for bucking bulls right at our house now, and it is definitely showing its dividends every day and every time our bulls buck.“

Along for the ride is Foley’s dad, initially hesitant for his son to get into the bucking bull business.

“My dad is the ranch manager,” Foley said. “He’s a huge help to me. He always told me I was never allowed to have them at the house and now I’ve got their yard right full of them. And he’s out there when I’m gone, he’s feeding and he enjoys it just as much as us.”