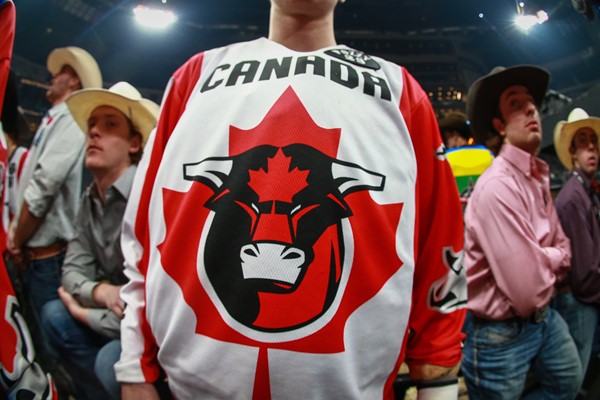 MINNEAPOLIS, Minnesota – On Tuesday night in Olds, Alberta, Canucks that made the journey to Olds College on the cold fall evening got an initial glimpse into what Team Canada for the 2020 WinStar World Casino and Resort PBR Global Cup USA, presented by Monster Energy, could look like.

Organized by head coach Scott Schiffner and assistant coach Tanner Girletz, the Albertan city hosted what the duo dubbed an evaluation camp, encompassing both a group conversation and a practice pen of bulls, for their top prospects ahead of the looming global bull riding showdown.

With the likes of former team members Zane Lambert, Jared Parsonage and Lonnie West on hand, team hopefuls such as Shay Marks, Ty Ellis and Jake Gardner were also present hoping to catch the eye of the coaches who hold full control over the six-man, one alternate roster set to compete inside AT&T Stadium in Arlington, Texas on Feb. 15-16.

And while the discerning coaches were eager to scout, with riders attempting bull power provided by Curtis Sawyer of Outlaw Buckers and Nansen Vold of Vold Rodeo, Schiffner and Girletz were also keen on setting an early tone for the team camaraderie.

“The reason that Tanner and I did this was to bring all the potential riders together before we set our roster and just give everyone an opportunity to come there, let Tanner and myself explain what we’re expecting from the team, and in return let them have an opportunity to voice their opinion,” Schiffner explained.

“If there’s any problems with me personally or Tanner, or anything, the structure of it, get everything out in the open, talk about all the good and the bad, and that way moving forward, once we do get our roster set, there’s no he said, she said, everything’s out in the open so we can move forward as a team.“

Quick to standout to both Schiffner and Girletz was three-time Team Canada rider West.

“One guy that really stood out to me was Lonnie West and he didn’t even get on a bull,” Schiffner said without hesitation. “The reason he stood out to me is in our meeting he was really open and upfront. He voiced good things and bad things from the past Global Cup and he didn’t beat around the bush.

“He was honest and upfront and spoke as a leader to a lot of the other guys, not just Tanner and myself. And the fact of it is what it is, and Tanner and I are now the coaches, and the past is the past and moving forward.”

The character traits that separated West from the rest of the group are directly indicative of the direction with which Schiffner and Girletz hope to steer the team – one that places emphasis on team camaraderie and fully embracing the element of riding for one’s country.

“We felt that the guys in Canada that we put in that room last night, and a couple that couldn’t make it, we feel that them are the best guys in Canada at this time,” Schiffner explained. “We feel they all have the ability to ride them bulls and can do it, but what we’re looking for is the guys that can merge as a team and have each other’s’ back and not just put their hand in the rope to be a bull rider for themselves. Know they’ve got a country riding on their back, know they’ve got six other guys behind them.

“I want every single guy to feel like they are carrying the whole load, but in return know that they’ve got someone else that has their back.

In the midst of observing rider dynamics, and team cohesiveness, one rider broke through for the new coaching staff based on the grit he displayed on the back of the bull.

“Every time he got off he would come and he was asking guys, he just wants to be better.”

And while not a single rider, for Schiffner, the try displayed by some of the team’s more distant hopefuls spoke volumes of their dedication to competing for Team Canada.

“For Tanner and I it really showed the dedication,” Schiffner explained. “You know they showed up, and they wanted to get on, and they wanted to put their best foot forward, and by no means are we judging them on just that bull ride last night, but it dang sure helped our vision of them that they truthfully want to be on that team.

“So that was the big thing for us.”

In addition to giving themselves a better insight into the nation’s current talent pool, Schiffner also hoped the camp gave the country’s up-and-coming talent inspiration and drive to continue working towards making the 2020 or future Team Canadas.

“For some of the guys that showed up last night, and may be a long shot to make the team, the biggest thing for Tanner and I is we hope this is a long term building thing,” Schiffner explained. “So I really hope that a lot of them guys that showed up that don’t maybe get to go on this year’s, the 2020 Global Cup team, know that we’re always watching them and we expect big things from them and we just hope it give them more drive and desire to be on the 2021 team.”

With just more than four months remaining on the calendar before the soon-to-be-formed team will travel stateside, the undertaking awaiting him isn’t lost, with Schiffner aware of the climb he faces as he looks to turn around the nation’s last-place finish in 2019.

“I took it on full heartedly,” Schiffner said of the role. “I was fortunate enough to get asked to do it, so I’m going to take the role on with everything I have.”