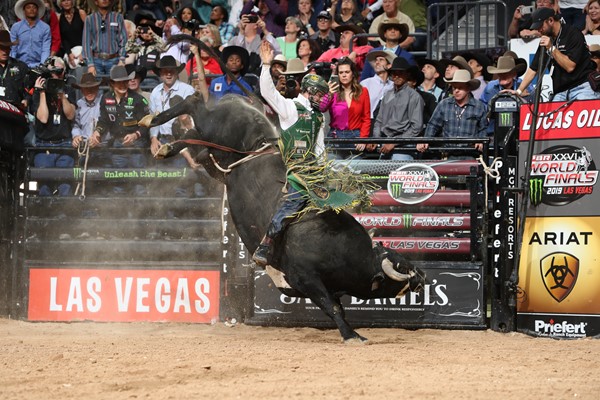 NEW YORK CITY – In the history of the PBR there are only six riders who have won the league’s World Championship in multiple seasons.

Adriano Moraes was the first to accomplish the feat, winning his first title in 1994, followed by his second in 2001. He made further history when he won his unprecedented third PBR World Championship in 2006.

And last season, in 2019, Jess Lockwood, who first won the world in 2017, became the youngest athlete in PBR history to join the list, earning the year’s World Championship after one of the most fiercely contested title races in league history.

Of those points, Lockwood earned 932.5 points at events not a part of the elite Unleash The Beast, including 267.5 in Canadian competition.

Lockwood, who was sidelined for several months at the start of the season as he recovered from a broken collarbone sustained at the 2019 PBR Global Cup USA, made his season debut on Canadian soil on July 1, competing at the Touring Pro Division’s event in Cluny, Alberta.

Going 1-for-2 at Coulee Creek Farms, the Montana man won Round 1 with an 85-point trip on Feed Bill en route to his fifth place finish.

The now 22-year-old then turned his focus to Calgary as he geared up for his third consecutive appearance at the “Greatest Outdoor Show on Earth” – the Calgary Stampede.

First, however, Lockwood competed at the final day of competition for the Ranchman’s PBR Charity Classic.

With a raucous Calgary crowd cheering him on, despite the poor, rainy weather conditions, Lockwood dominated.

Delivering matching 89-point rides aboard Blow Me Away and Catch My Drift, Lockwood not only swept both rounds, but won the overall event.

“It wasn’t the day we wanted. It was cold, wet and rainy, but I figure if we are going to be cowboys and compete in this, you might as well win and make it worth,” Lockwood said after. “So we toughed it out and got two rode for 89 and won it.”

While Lockwood left with a cheque for $33,530 compliments of his efforts, including a $25,000 bonus for winning the event, he collected an even more crucial 170 world points.

Lockwood then set his sights on a Calgary Stampede bull riding championship.

Narrowly edging a hard-charging Chase Outlaw, Lockwood punched his tickets to Showdown Sunday in dominant fashion, winning Pool A after going a perfect 4-for-4.

First riding On Target for 85 points, Lockwood followed that 8-second effort with an 84.5-point trip on Cold Water, and an 85.5-point ride on Major Pain 2, before completing his flawless performance in the pool portion of the iconic event with an 87.5-point score aboard Sure Shot Panda Haus.

“I win the pool?” Lockwood asked PBR Canada’s Ted Stovin moments after. “Sweet, I am more concerned about them 50 points right now [than any prize]. To think you can get points for the world standings on top of the biggest rodeo world is pretty dang cool. I like that they give points up here. It gives you more of an incentive to come to this – not that you need it.

On Showdown Sunday, after Lockwood topped the round of 10 riders with a 91.5-point effort atop Finning Lil Shorty, he finished just short of the win when he bucked off Blackstone After Party in 3.8 seconds in the final round.

Collectivley, Lockwood earned 87.5 world points for his strong showing at the Calgary Stampede, but still left as the world No. 2.

Victorious at the annual Touring Pro Division even in Jackson Hole, Wyoming, Lockwood won two additional Unleash The Beast events, and three 15/15 Bucking Battles prior to the World Finals.

He then bookended his season, which began with a win on the Unleash The Beast in New York City, with a win at the World Finals, pushing him past Leme and into the world No. 1 ranking by the time the last bull bucked at the season-culminating event.

“It will take a while for this one to sink in,” Lockwood said moments after winning the World Championship. “You work your whole life to become a world champion. Now I get to have my name next to guys like Justin McBride and Chris Shivers. It’s what you dream about. To have it become a reality is that much sweeter.”

Relive Lockwood’s record setting season, including his performance on Canadian soil, today on RidePass, at RIdePass.com or via the mobile app.