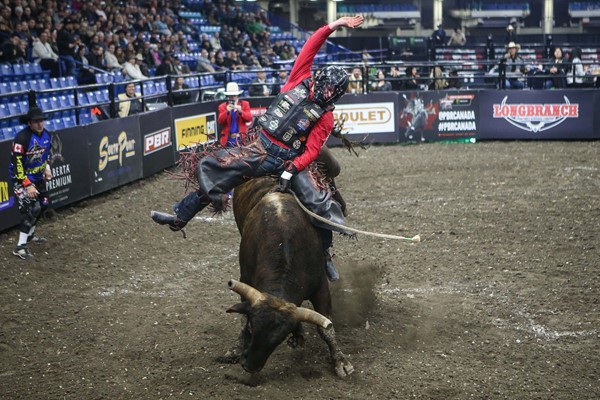 Competing through injury, Brock Radford made an incredible push at the Canadian Finals in an effort to be crowned the 2018 PBR Canada Champion. Photo: Covy Moore/CovyMoore.com.

NEW YORK CITY – In 2017, Brock Radford finished No. 2 in the national standings, with the PBR Canada Championship narrowly slipping through his fingers.

The next season, however, Radford returned more determined than ever to leave the SaskTel Centre in Saskatoon at the end of the 2018 season with nothing less than the glittering PBR Canada Champion buckle.

Through the first five months of his season on home soil (March –August), Radford earned two event wins, including his career-first on the Monster Energy Tour, along with seven additional Top-5 efforts.

As a result, on August 9, Radford was ranked No. 1 in Canada.

Then injury struck. While competing at a CPRA event in Jasper, Alberta, Radford tore his left ACL/MCL.

Sidelined for two months as he worked through a non-surgical recovery plan, Radford made his return to competition on the elite Unleash The Beast in October, where he made a last-minute push to qualify for the PBR World Finals, successfully earning an alternate position to compete in Rounds 3-5 of the prestigious event.

Radford’s efforts then became laser focused on actualizing his goal, returning home to compete one last time in 2018 before undergoing surgery to repair the injury, riding at the Canadian Finals.

He entered the event, which had 2,250 points available, No. 3 in the nation, within 94.99 points of the then No. 1 Lachlan Richardson. On the opening night of competition, Radford rose to No. 2 in the nation, inching within 22.49 points of Richardson after he rode Snap Shot for 84 points.

On the final night of the season, Radford mounted one of the most incredible campaigns ever witnessed.

After riding Twist of Barbwire for 84.5 points in Round 3, it was undeniable the pain with which he was competing. Needing to win the event to secure the national title, one bull stood between Radford and either accomplishing a career milestone, or leaving the venue at the end of yet another season without the coveted title.

But that number of bovine athlete opponents quickly doubled, facing another one of the nation’s rankest bulls after he earned a re-ride following his 4.2-second buckoff from Cause n’ Effect in the championship round. As the last man to leave the chutes during the 2018 PBR Canada season, Radford needed a score in excess of 87 points to cement the title. Matching Grey Tower III move for move, Radford reached the 8-second whistle as the venue erupted in raucous cheer. Despite his amazing feat of perseverance, Radford, however, was marked just 85 points, finishing No. 2 in the nation once again.

Still on the hunt for his first national title, Radford has been a formidable presence in Canada ever since, currently No. 2 thus far in 2020. Will this finally be the year he concludes his campaign with a national championship?