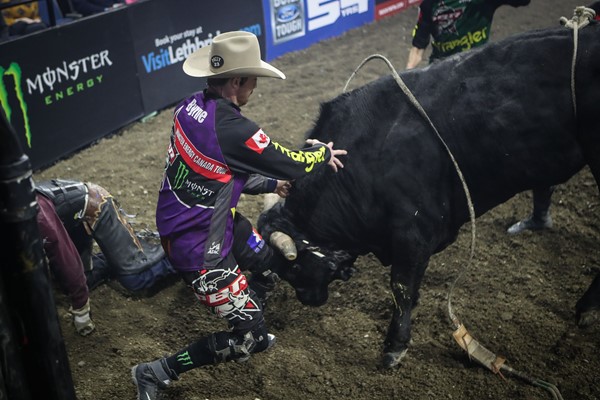 Following in his footsteps, Ryan’s sons Bo and Jesse were quick to take to the family business.

Much like his dad, Jesse, now one of the principle bullfighters on the elite Unleash The Beast, made history of his own, in 2008, becoming the first Canadian to work the PBR World Finals.

However, Ryan’s third, and youngest, son, Tanner, blazed a different path, instead pursuing a career as a bull rider.

A four-time PBR World Finals qualifier, Byrne additionally rode his way to the 2015 PBR Canada Championship and three Unleash The Beast event wins, recording his best year-end finish in 2015 when he concluded the year No. 8 in the world.

RELATED: Dominant Tanner Byrne Excels on Both Canadian and World Stage in 2015

Byrne, however, decided to change course in 2019, hanging up his bull rope in order to pursue a career in bullfighting.

RELATED: Byrne to Retire at End of 2019 Season to Pursue Bullfighting Career

“The deal is since I was a little kid – since I can always remember – I always had a plan of riding bulls and at some point switching over and joining the family business of fighting bulls,” Byrne said.

“I just want to follow my dream. Life is too short not to go out after something full-heartedly. It is time for me to do what it takes, enjoy what I am doing and go after it. It was a lifelong goal and dream of mine that I am going to go at now and start this new chapter and see how we can get it done.”

Byrne made his PBR bullfighting debut on July 2 at the PBR Canada Touring Pro Division stop in Calgary, Alberta.

Following his debut, the Prince Albert native worked additional PBR events in cities such as Lloydminster, Saskatchewan, and Magrath and Grande Prairie, Alberta.

Then, Byrne etched his name in the history books alongside those of his dad Ryan and brother Jesse.

Selected by rider vote to work the 2019 PBR Canada Monster Energy Tour Finals, Byrne became the first athlete to have ever ridden and fought bulls at the season-culminating event.

Also serving as his Monster Energy Tour debut, Byrne has been a mainstay on Canada’s top tour ever since.

At the 2020 season-launch event in Calgary, and subsequent stop in Lethbridge, Byrne added another element to his job, mic’d up to serve as an in-arena commentator for the RidePass and TSN telecasts.

And while the western sports world may now be amidst an unprecedented hiatus, Byrne forecasts what may be the some of the most intense competition ever witnessed when bull riding returns in Canada

Relieve the 2020 PBR Canada season to date today on RidePass. Tune-in to the broadcasts from Calgary and Lethbridge and RidePass.com or via the mobile app.