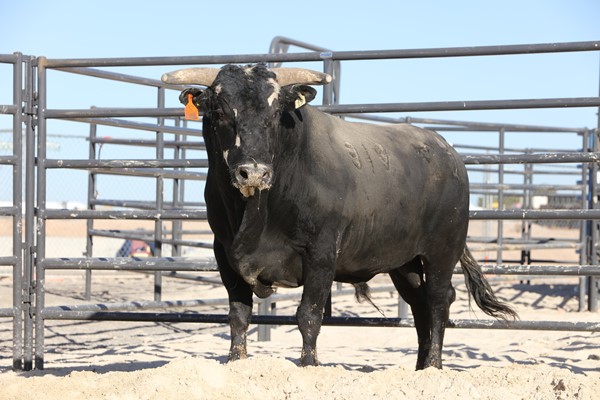 AIRDRIE, Alberta –  If you’ve been paying attention to the PBR Bucking Bull World Standings, you will know the name Canadian Mist.

However, one thing you might not know about this incredible bovine athlete is that 319 Canadian Mist was born and raised on Canadian stock contractor Nansen Vold’s property.

Originally known as Wish Right Now, this small-statured, yet fiery black bull was sought out by Oklahoma’s J.W. Hart when he needed a short round bull, in short order.

Currently ranked No. 6 in the world, Vold was quick to point out the impact Canadian Mist has had on his program.

“We sold that bull as a coming four-year-old,” Vold detailed. “We had five or six trips on him that were all on video. J.W. Hart got ahold of me after he had seen him on Facebook.”

“He had a bit of a slow start,” Vold said further.

“About a year later, after his first World Finals, he really started firing and has been a contender for Bull of the World two years now.”

With five trips on record thus far in 2020, Canadian Mist, who maintains a 44.9-point average bull score, 0.93 points behind No. 1 Chiseled, is as consistent as ever.

Examining the entirety of his career, of the three men who have ridden Canadian Mist, combining for four qualified rides, no rider has been marked fewer than 90.5 points.

The first man to make the whistle on the Canadian-born bull was none other than two-time and reigning PBR World Champion Jess Lockwood in Tulsa, Oklahoma in August 2018 for 91.5 points.

Luciano de Castro then posted back-to-back monstrous rides aboard the bull, marked 92.5 points in Austin, Texas in September 2018 and 90.75 points in Little Rock, Arkansas in March 2019.

Mason Taylor is the most recent rider to reach the requisite 8, taking him to the whistle in Tulsa in August 2019 for a 90.5-point score.

Collectively, of the bull’s 42 trips, 38 have ended in a cowboy on the ground prior to the 8, denied a score.

“He has super speed and kicks the lights out every time,” Vold remarked.

“He is around to the left 95% of the time and gets guys down with that big first kick out of there, which is always over his head. He comes around there and is always whooping it up. He is very impressive.”

With the 2020 season amidst an unprecedented pause, Vold said he isn't sure what the YETI PBR World Champion Bull race will look like, but knows what will be required of any bull in their pursuit of the prestigious title.

“It will take a lot of heart, and consistency is key. The bull either has it or he doesn’t have it, and there are only so many that will go for a run at Bucking Bull of the World. [Canadian Mist] has a few things that are going against him, like his size. He is a little smaller than the Bruiser’s and Smooth Operators. That’s a disadvantage for that little bull, but he has a ton of heart.” he said.

With Canadian Mist set to turn 7 this year, Vold is eager to see what is ahead for the bull.

“He has a really good shot at pushing forward and doing this for years to come. This is a weird year with a likely late start, but I think he will be really fresh like the rest of them.”

In Canada, Vold is one of, if not the largest, stock contractor in the bucking bull game, boasting five Stock Contractor of the Year, and two Bucking Bull of the Year titles in Canada.

Vold credits his push the past five years as to what has allowed him to bring enough bucking bull power to his pen that he can afford to sell two or three standouts to PBR stock contractors stateside each year.

“I have tried to push our program to a spot where he have enough bulls going that we can afford to sell one or two each year south. It seems to be working, but it takes a lot of numbers to get it done,” Vold commented.

“At the end of the day I am trying to have enough quality bulls in Canada that I can afford to sell a few down south and maintain a great program up here.”

Seeing Canadian Mist’s success down south isn't something that bothers Vold, who admits while it would have been incredible to see what that bull could have accomplished in Canada, it’s brings both him and his family incredible pride to see what can come out of not only their operation in Ponoka, Alberta, but out of Canada as a whole.

“You definitely wonder what a bull like that would win up here, but you can’t think that way,” Vold added.

“When you sell a bull down there all you can do is pray for a bull to do well. The guys that have him down there are great and they really look after their bulls. He is a frontrunner for our program too, and he helped build a good relationship with those guys. We have send down a few more after last year that hopefully get to bucking for him soon.”