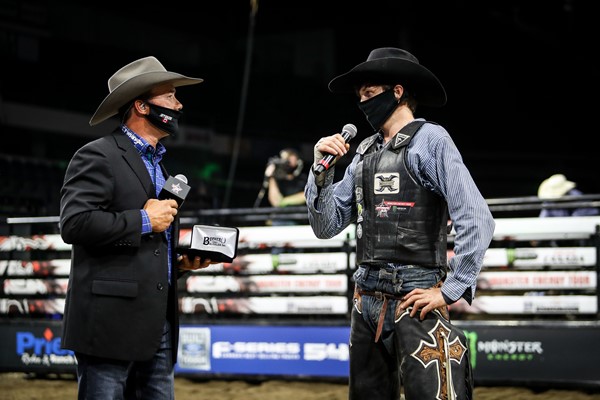 First winning the then Touring Pro Division stop in both 2016 and 2018, Green won the 5/5 Bucking Battle in the city this past March when the elite Monster Energy Tour made its second appearance in the city.

And when PBR pioneered the return of sports in Canada in late July, Green had not one, but two chances to earn another event title in Lethbridge, as the ENMAX Centre welcomed the league for a double-header Monster Energy Tour show.

As the action got underway with the PBR Cooper Tires Invitational, Green let his first bull, Irish Rebel, get away from him, but simply refocused with the next event on the near horizon, just hours away.

“Getting a bull under a guy’s belt after having four months off, it darn sure gets the feel back pretty quick,” Green said.

“I thought I was ready, and I was ready as you could see on those other two bulls. I watched video back of that first bull and I just got into the well a hair, and I lost my foot and it all went from there. It was just a small mistake, but it cost me. I damn sure came back and got them in the second one.

“I didn’t watch it between the performances, I watched later, a couple days later. You have to see what happens. In the moment I just cleared my head for the next two.”

The second event, the Built Ford Tough Invitational, was a completely different story for the 28-year-old veteran, drawing deep into the Flying Four Bucking Bulls’ pen on Finning Hou’s Deacon in Round 1.

Reaching the requisite 8 for 85.5 points, Green not only won the round, but also secured the top pick in the pending bull draft for the championship round.

“He is a good draw, I have seen him around lots,” Green said of Finning Hou’s Deacon. “He is usually right there around to the right. I saw him last year in Saskatoon and [Jared] Parsonage had him, bucked him off right there. Probably shouldn’t have gotten him there though.”

“Then I have seen him with Jake Gardner this summer when [Tanner] Byrne put on that quarantine bull riding session. He looked good both times, and I was pretty happy to have him in Lethbridge. Damn sure feels like a good draw.”

Continuing the momentum, Green drafted yet another Flying Four bovine athlete for his final bull of the event, choosing Finning Lil Shorty.

“I remember watching him at Calgary there in the 10-round where Jess Lockwood got on him and was 91.5 points, it was just awesome,” Green said of Finning Lil Shorty.

“He bucks, but he also doesn’t throw any garbage at a guy. He just flat out bucks. He gives you a chance to look flashy and be a bunch of points on him. Knew he would probably feel good. I also knew he could go both ways.”

“Guys were asking why I didn’t pick one of those bulls that would go right every time,” Green continued. “I don’t know, I just thought that bull would feel good any way he went. He ended up going left and away from my hand and he felt good like I knew he would.”

Teaming for an 88-point score, Green’s instinct was right, claiming his first event win of 2020.

Compliments of his flawless performance, Green earned a cheque for $3,443.78, along with 80 Canadian and 15 world points.

Additionally, as part of the Shell Rotella Rugged Ride for Charity initiative, a $1,000 donation was made to charity in recognition of Green’s event-best 88-point ride. Green selected the Ty Pozzobon Foundation as the benefitting organization.

Green gained one position in the national standings, rising from No. 4 to No. 3, now within 70.5 points of No. 1 Dakota Buttar.

Leaving the event, Green admitted that his sights were set on two wins and a chance at leaving as the season leader, but knows there is a lot of competition remaining prior to the PBR Canadian Finals in Saskatoon in November.

“I was disappointed I didn’t win both for sure, I shouldn’t have let that first bull get me like he did. I had good draws. I wanted to leave there number one, but it is what it is. I definitely climbed up a spot and got closer to the number one man. Hopefully we get some more bull ridings here coming up and a guy can get some good draws and get some points wrapped up.”

“I am just staying ready and sticking to my routine and act like I have a bull riding every weekend,” Green continued.

“Hopefully we are able to get some more coming up in the early fall. I was hoping we get a few more Monster Energy Tour events, it would be nice to be able to try and make the World Finals from up here. They are not going super hard down there either. It’s a possibility a guy could get that done. I have got my passport ready to head down.”

With the dust settled from a marathon of a day in Lethbridge, Green extended his thank you to the PBR Canada team for their efforts in building an event in a country that will see no professional rodeo events to compete at for the entire 2020 season.

“I can’t thank the PBR enough, and everybody that helped out putting this event on. We sure appreciate it.

“Getting sick of sitting at home watching bull riding on the TV. Darn sure happy they are trying to get some events going for us bull riders up here. The pro rodeos up here are all done for the year, they are all cancelled. So anything they can put on for us, sure helps us out.”