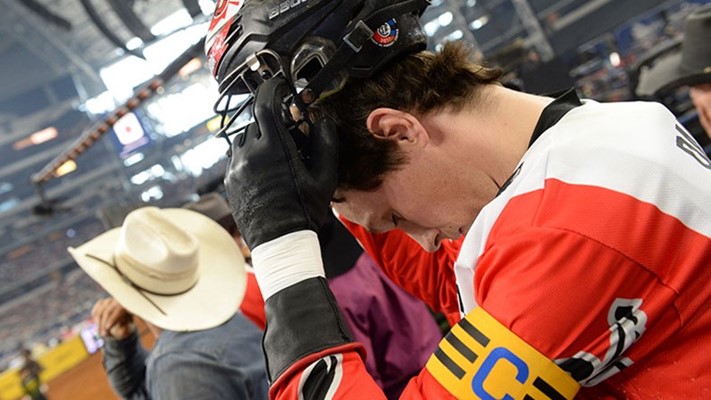 ARLINGTON, Texas – In the Team Canada locker room following the 2020 WinStar World Casino and Resort Global Cup USA, presented by Monster Energy, you could cut the tension with a knife.

The cowboys were silent. Faces damp with sweat glowered from their lockers, bags of ice taped to sore limbs.

It was a far cry from the upbeat mood surrounding the Canadians after the first night of competition, when they had trailed the event-leading Team USA Eagles by a single bull and were poised to challenge for their first-ever Global Cup title.

After getting three rides on the board in the first two rounds of competition, Team Canada was blanked in the following two rounds on Sunday afternoon inside AT&T Stadium.

The Canucks went 3-for-16 overall for a fourth-place finish, improving from a dismal sixth place showing in 2019. Ultimately, though, they recorded the same number of rides in 2020 that they did a year ago.

“It wasn’t worth a shit today, to be honest with you,” said team captain Jared Parsonage. “Some of us damn sure, or at least myself personally, didn’t hold up my end of the bargain. Didn’t ride. Bucked off. Some of it got away, and we’re not happy with it.”

Team Canada got out to a blazing start with rides from Zane Lambert (87.75 points on Arctic Assassin), Jake Gardner (87 points on Medicine Man) and Jordan Hansen (85 points on Apocalypse) to go 3-for-6 in Round 1 Saturday night.

That, however, is all they would manage.

While an incremental improvement from 2019 means the trajectory is going in the right direction, the mild-mannered Parsonage pulled no punches about how the finish stings.

One bright spot on a hard day for the Canucks was Gardner, a young gun making just his second Global Cup appearance.

“Jake, he’s a young guy, and he’s got gravel in his guts and fire in his eyes,” said assistant coach Tanner Girletz. “We could tell him to get on anything right now. He’s ready for Godzilla. It don’t matter to Jake. He rides so good, and he was just looking for someone to believe in him. As soon as we invited on the team, he started winning everything at home.”

Gardner made it plain to coaches and teammates alike that, should he get the opportunity, he wanted nothing more than to square off against 2019 YETI World Champion Bull Smooth Operator.

In the final bonus round, Gardner got his wish, and took the bovine athlete to an agonizing 7.73 seconds before getting bucked off.

“I think that’s pretty plain as day for everybody to see out there,” Parsonage said. “Jake Gardner stepped up on Smooth Operator there. He wanted that bull all along, and he about hit a home run there. He was about .2 seconds from riding him.

“Jake’s got a ton, a ton of talent, a ton of potential. He tries hard, he’s fun to be around, has a good attitude. I would say everybody’d better look out for that one.”

Despite the buckoff against Smooth Operator, Gardner’s ride on Medicine Man may be a turning point for a rider working on believing in himself.

“It’s really good for my confidence, because I feel like I showed everybody that I can ride good bulls that good guys have trouble getting by,” Gardner said. “So it’s kind of a weight off my shoulders.”

While Gardner’s ascendance offers hope for the future of Team Canada, the current group will head back north and regroup, looking for a way to climb the mountain of international bull riding after consecutive disappointments.