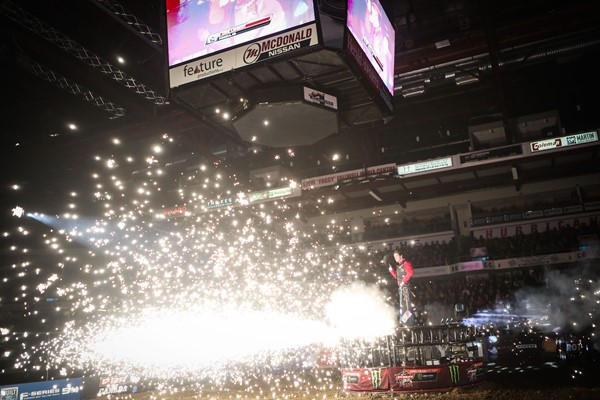 AIRDRIE, Alberta – Roughly a month ago, PBR Canada Production Manager Peter Gebraad set out with a mission – bringing back the Monster Energy Tour and premier bull riding competition not only for the riders and contractors in the sport, but also the fans.

Inspired not only by long days working on a family member’s basement development, but by his passion for live events, Gebraad got in touch with PBR Canada General Manager Jason Davidson to get the wheels turning.

“I called Jason Davidson, said I hate what I am doing right now. I have been doing events my whole life, it is what I am meant to do. I want to go back to work,” Gebraad began.

“There is a cascade of people behind this that would step up and do the same. Sure enough, the dominoes fell and the best production team in Canada has all stepped up and made this possible.”

The health regulations surrounding the ongoing COVID-19 (coronavirus) pandemic have largely kept fan-attended events muted, posing yet another challenge for the production boss at PBR Canada.

“This industry is built around bums in seats, ticketed patrons,” Gebraad said. “And without those ticket buyers, we obviously don’t have the big ticket revenue, the concessions, merchandise, but we also don’t have the eyes looking at the signs around the arena, seeing the commercials during section breaks inside the arena. The sponsorship plans fall apart with this.

“This is why you are seeing events like the Canadian Finals Rodeo, Calgary Stampede, so many events in the western sports industry fall to the wayside right now, because the business model doesn’t work without bums in seats. We have had to reinvent how vendors and sponsors can get value out of this.”

And reinvent PBR Canada has.

On July 23 the Monster Energy Tour will hold two events in Lethbridge, Alberta at ENMAX Centre. The first, the PBR Cooper Tires Invitational, will be held at 1:00 p.m., followed by the PBR Built Ford Tough Invitational at 7:00 p.m.

And these events, especially the second, are going to be one-of-a-kind. Without fans in the seats, the creative mind of Gebraad and those involved with the design of the event began working.

The PBR has been making its way into Lethbridge for 20 years, and while the arena, its look and setup may be predictable, what is being cooked up for Thursday’s event is brand new.

The first event will remain closed to the public, seen only on RidePass and TSN, the second will be fan-attended via a drive-in in the parking lot immediately outside of ENMAX Centre.

With the consideration that the event will be consumed live on RidePass as well as via the at-venue drive-in event, there is a lot of consideration going into the visuals of the event.

“You learn from every opportunity you can in life,” Gebraad began.

“You watch what others are doing, what has happened in the past. We have had to redesign what the experience will be, because it's going to be an event consumed through the lens of a camera. It's going to be very different. That’s where the video and imagery we are putting into the building are coming in.

“Having video content and sponsorship logos behind the big moments is how we are hoping to give value to our sponsors. We are hoping that as we continue to pave the way back from this, that we are going to showcase ways to give sponsors the exposure they have been getting previously, but in a new way.

“When all those folks with our sponsors are tuning in, I am confident their jaws are going to drop because of the giant sponsorship logos in the background of those big moments, those big rides, or the opening, or that moment that Dakota Buttar goes for his 14th consecutive bull ride.”

“What can we do that will be great on camera.” Gebraad continued. “When designing pyrotechnics, suddenly we don’t have the limitations of being in a building full of people. We can go to positions and places we haven’t gone before. We are exploring each element of our show, from lighting to pyro to announcing, to sponsor recognition. It’s reevaluating everything in a way that we can present it in a new and exciting format.”

In addition to the visual redesign of the event, which will feature two 40-foot video screens inside the venue, more than quadruple the amount typically used at a PBR Canada Monster Energy Tour event, the entire arena has been revamped.

This go round, the chutes will be staged on the centre line of the arena. This will give all personnel plenty of space for social distancing efforts, as well as creating an intimate 55-foot arena. In addition, there will be six large 8-second clocks to ensure fans can visibly keep up with the action.

“The 8 seconds is a key part of our sport,” Gebraad added.

“We feel that in every camera angle and every image you see that the clock is very visible. We have surrounded the arena with six different 8-second clocks. No matter how it’s being captured, you will be able to follow the progress of any bull ride.”

Lastly, with no one in the seats to bring that audio element to one of the most dangerous and exciting sports on earth, Gebraad said that the audio element will be different as well, bringing a whole new layer to the sport that many would never get to hear.

“We are planning for audio to be picked up behind and in the chutes,” Gebraad explained. “We are really going to hear the bull riders.

“You can hear them sometimes yelling in the background in previous telecasts, but you are going to be able to hear everything they are saying. It might be a challenge, we wouldn’t mind if guys watch their language, but that's ok. I don’t mind a telecast with a few beeps in it. That element is going to clear and present here.”

Despite all the differences from a show that typically has a few thousand people screaming for the big rides or jumping at the bone-rattling opening, Gebraad is confident that the different experience is going to add a lot to the event, and that the energy in the building, on RidePass and at the drive-in will be comparable to a typical Monster Energy event.

“This is part of what we are moving forward. I am excited to see how it all unfolds. I can tell you this, these guys ride bulls for a living. I can’t imagine something more terrifying and if the adrenaline isn’t pumping at 100% when they are getting on, I don’t think it matters if there are 10,000 people in the seats or not a single person. It’s going to be entertaining.”

The choice to land in Lethbridge, where the sport last competed under the PBR Canada brand, was an easy one, between the incredibly accommodating ENMAX Centre and the city’s welcoming population.

“It’s a community that has had this product presented to them for 20 consecutive years,” Gebraad explained. “It’s growing with our product.”

“It’s getting to know our bull riders and our talent. Understanding that when you come to a PBR Canada event, you get your money’s worth. This is a town that enough people have come to see our product that there is a growing fan base and wave of support behind us.” he said.

“ENMAX Centre has been an amazing supporter and partner of ours for years, and I can’t even begin to describe how good they have been over this past month.”

Gebraad admits there are plenty of unknowns for this event, but says that having PBR Canada’s Jason Davidson and Blaine Fyson put their backing behind his idea to get back to competition during this unprecedented time is an honour.

With only about 200 tickets for the drive-in experience available, he hopes the city will show up to support the first professional sport in Canada to be putting on live events.

“If you are a bull riding fan, you want to be there. The experience will connect with you,” he said.

“It is going to be an engaging experience. The fact we can’t experience live events, I think people are craving them and this is the closest we can get right now. If you want a slice of what COVID entertainment looks like, come out to a PBR Canada Monster Energy Tour LIVE: Drive-In Spectacular experience and see what we have in store for you. We have some tricks up our sleeves, you aren’t going to be disappointed.”