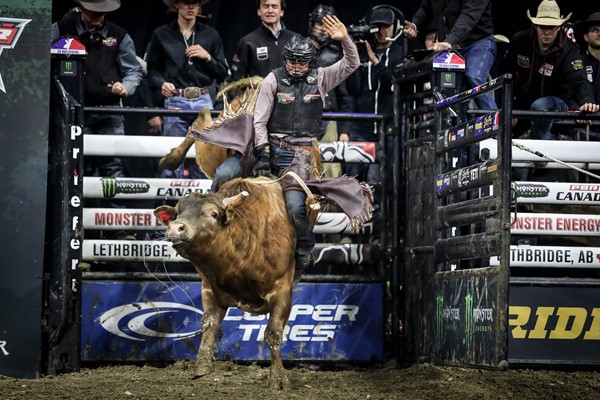 Jayded is one of two Vold Rodeo bulls selected to buck at the 2020 PBR World Finals. Photo: Covy Moore/CovyMoore.com.

AIRDRIE, Alberta – When the PRB World Finals makes its debut in Arlington, Texas at AT&T Stadium Nov. 12-15, one Canadian stock contracting outfit will be on hand for the historic event --- Ponoka, Alberta’s Vold Rodeo and Nansen Vold.

Jayded and Vertigo Spy were chosen by PBR Livestock Director Cody Lambert to buck at the sport’s most prestigious event in Mid-November inside the home of the NFL’s Dallas Cowboys.

Despite having sold six bucking bulls after his trip to the PBR Unleash The Beast tour in Billings, Montana earlier this year, Vold says he was confident a couple more bulls would shine and make the cut for the World Finals.

“It has been one of those years that hasn’t been the best for everybody,” Vold said. “We have been lucky to get to a handful of events this year in Canada to showcase our stuff. Fortunately we were picked by Cody Lambert this year to make it down to the World Finals.

“We are fortunate enough to bring those two down this year. We have been lucky to have been at the World Finals for the past few years running, I don’t remember how many exactly. It’s the place to be at, no matter where it’s being held.”

“It’s very good for our program to make it down there to that high level,” Vold continued.

“It’s a huge honor for us. I had confidence in those two. I have some great partners up here that raise some great bulls, as well as our program at home. We certainly didn’t have expectations to get down there, but we were very happy to get that call. We are fortunate that they still looked up here into Canada to see what they could fill out their draw with. ”

Jayded got his job done twice in Billings, Montana, bucking off a pair of Brazilians in the process. Scoring 43.25 points and 42.5 points against Claudio Montanha Jr. and Eduardo Aparecido, respectively, Vold says that bull has a trip that will keep the rider guessing, but doesn’t pull any dirty tricks either.

“He isn’t a fired up bull, he isn’t really mean. He has a lot of action they call it, a lot of drop and a lot of kick. He isn’t really speedy compared to Vertigo Spy, but he has a lot of other stuff going on. He will go left or right out of the gate, no one really knows his tracks,” Vold said.

“That up and down action is what a lot of guys want, and I think that is what caught Lambert’s eye when he went to Billings.”

Vertigo Spy, a bull that many in the PBR Canada dressing rooms figured could have been a shoe in for Bull of the Year in Canada has what Vold calls, “the whole package.”

“He is full bodied, well-structured in the front end and the back end is a little tighter. He has that speed and whip that you really want. He turns back in the gate and really gets it on. He was the favorite to win Bull of the Year for us up in Canada, and I don’t think that is going to happen because he will be missing out on finals and will be down in Texas.”

Being the lone ranger headed to the Lone Star State, Vold says that his list of bulls from Canada that should be going down is a lot longer than just his two. He added that just about every stock contractor in Canada has some sort of prospect that can shine on the big stage in the USA, but singled out a few that he says will be missed this year.

“Happy Camper has been going the last three years, and it’s so disappointing that bull doesn’t get to go a fourth time in his career. He is one of the top picks on my list to be going down because he is just always so consistent and gets his job done, and Josh [Berezay] has a good one there for sure,” Vold explained.

“Wild Hoggs has a bull that I thought could be there. Tykro Pound Sand has always been a good bull for them, he is getting a bit of age on him now. He is getting past the six-year-old mark where they might just start slowing down just a bit. When they are in their prime, in that four- to five-year-old mark, you see a lot more go down. We are short a few from up here in Canada for sure, but those two I think can showcase down there just as well as up here in Canada.”

Vold’s hopes for the week in Arlington, Texas are simple. A couple of strong, safe outs and to draw well.

“Vertigo Spy gets to go down and stay down for the NFR down there. He will be living in Texas for a month or more. J.W. Hart is always looking at this bull, so if he performs well at the World Finals and NFR we will try and get some deal worked out down there to get someone to take him over.”

“I just hope they perform well,” Vold concluded. “Re-ride is a swear word in the contracting game, so if we can get by with clean outs that will do. The draw is a big thing too, if a guy can draw well, draw into one of the top guys who showcase your bulls a bit better. We want good trips for both of them, keep on their feet and make it happen.”