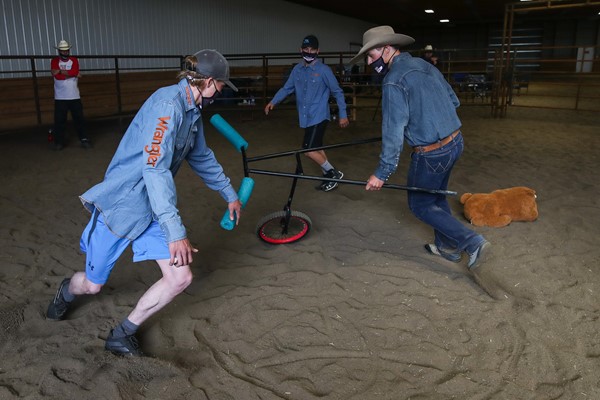 Brett Monea is one of the top bullfighters in Canada. Photo: Covy Moore/CovyMoore.com.

AIRDRIE, Alberta – PBR Canada bullfighter Brett Monea has created a brand new experience for the general public to get an inside look at what it takes to be a professional bullfighter.

After the first two editions of the Ultimate Rodeo Bullfighting Experience were met with resounding success, a third is being planned in October with the hopes of more to come.

“Offering the public an inside look of what it takes to be a rodeo bullfighter, and a chance to actually participate in fighting live cattle if you choose to and are deemed fit,” Monea explained of the one-of-a-kind event. “I believe in offering a safe place for people to try something that they wouldn’t normally try.”

The approximately five-hour day consists of basics such as stretching and foot work, then moves on to working with a bullfighting dummy. That instruction is followed by the basics of handling cattle, and participants are familiarized with a bucking chute, as well as the equipment used in bull riding. They are given the opportunity to work with beef bulls, moving, sorting and interacting with the animals up close.

The day is then capped off with a demonstration from the professionals on-site with some fighting bulls before being given the opportunity, if they choose and are deemed fit to fight, to engage with a real bulls or heifer that suits their level of understanding and fitness.

“That is the most important of this whole process really. If they choose to engage and fight with a live animal, and we deem them fit to fight, that it’s the right animal,” Monea explained.

Surrounding himself with like-minded and passionate professionals is top of mind for Monea and the Ultimate Rodeo Bullfighting Experience. Monea says that having the talents of the four men standing alongside him will give both the participant and experience a more all-encompassing feel.

“Travis James shared a quote. This really stuck out to me. ‘On the road to success there is always rooms to share appreciation and gratitude to other peoples’ successes,’” Monea said.

“Why not include other people who have found success in the sport of rodeo bullfighting, why wouldn’t I want to include them? I know their passion and love for the sport is just as intense as mine. Standing there alone isn’t much fun. I want them standing there with me, experiencing the same things I experience with these participants, and watching them go through this day and grow and learn from us. That is the biggest thrill.”

“Watching a participant figure it out, you see when things click for them. Or at the end when they get the opportunity and choose to step around that animal, just the sheer joy in it, that is the coolest part for me, but not just myself, but these other professionals. I just love them being a part of it. Then during the day and teaching, there might be the odd thing I miss and they really help with that. I love surrounding myself with like-minded individuals.”

And one of those moments occurred this past weekend at his second edition of the training camp, when the first animal was brought in for participants to engage with. The animal hooked up well with the participants and both made very well timed and executed bull moves, then found their way up the fence.

“The two participants that stepped around the first animal, they got up on the fence and they were smiling and fist pumping and had that adrenaline and sense of self accomplishment,” Monea said

“That’s the biggest thing for me.”

The long term goal for Monea is to offer the experience for both those who may or may not ever step into a rodeo arena again, to young aspiring bullfighters, affording them the chance to dip their toes in instead of going straight to a bullfighting school or a practice pen.

And Monea wants to be a part of the entire journey.

“A fan watches a rodeo or a PBR event and says I love what the bullfighters do. I don’t really know what goes into it, but I love what they do. Instead of spending a rather large sum of money to participate in a school in a sport that you don’t even know if you want to do yet, I want to give opportunities to people to experience bullfighting at the tamest form. After this day, you will know if you want to actively pursue bullfighting. You get to do so in a safe manner,” Monea said.

“A traditional school, if someone wanted to experience bullfighting, you enter a two or three-day school, matched up with younger bucking stock, but surely bigger and you will get into situations that you might not be ready for. I want to bring up athletes and participants and see if they want to continue. We want to develop a 2.0 version of this, with bigger cattle, more live-animal training. And after that if you decide you want to continue on, then I want to run the traditional school. But you will have so many tools to be more prepared for that moment of fighting a 1500-pound bucking bull and protecting bull riders and yourself.”