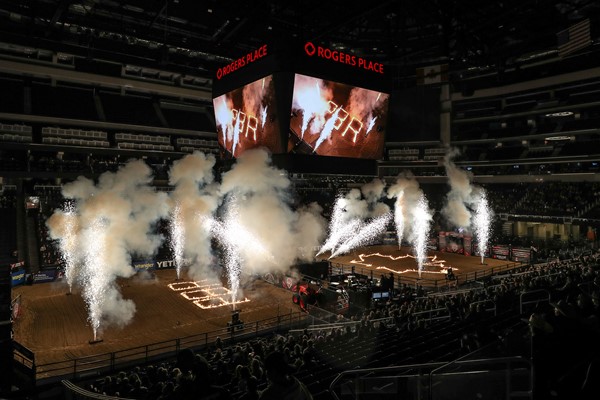 NEW YORK CITY – With just five days remaining in 2021, what better way to pass the time until the new year, than counting down the Top 5 moments of this past PBR Canada season?

We’ve already looked back at the Top 5 ride and bull scores, but today, we celebrate those five moments that caused as all to pause.

As PBR Canada’s elite athletes, both rider and bovine, again wowed, delivering numerous record-setting outs, the organization also continued to take the sport of bull riding to new heights outside of the bucking chutes.

It is regarded as one of the most prestigious honors for a stock contractor – having your bull selected to buck at the PBR World Finals. In 2021, two Canadian outfits got the nod from PBR Livestock Director Cody Lambert to compete in Las Vegas – Two Bit Bucking Bulls and Vold Rodeo.

While Two Bit buckers Happy Camper and Catch My Drift both readied to return to the World Finals, Vold Rodeo bovines Unkle Kranky and Hard Not To Get were preparing to compete atop the glittering dirt inside T-Mobile Arena for the first time.

The Canadian bovine contingent made their 2021 PBR World Finals debut in Round 3 with Happy Camper, Catch My Drift and Unkle Kranky, all earning a spot in the draw. For Catch My Drift, he was marked 42.25 points when he was covered by three-time PBR World Champion Silvano Alves for 86.25 points, while Unkle Kranky earned a 43.25-point score for his 2.69 seconds of work against Claudio Montanha Jr.

It was Happy Camper, however, who stole the show in Round 3. As the only Canadian bovine athlete to earn a second trip at the PBR World Finals, Happy Camper’s rivalry with Dener Barbosa was renewed, teaming with the Brazilian for and 89.75-point score. In the out, Happy Camper was marked 44 points, the best trip of the animal athlete’s career at the PBR World Finals. The “Bucking Sensation from the Two Bit Nation,” returned to the draw in Round 5. Drafted by young Brazilian sensation Mauricio Moreira, Happy Camper was scored 43 points, as Moreira reached the whistle for an overall 88.25-point score.

“I thought his first trip was really good,” Two Bit Bucking Bulls’ Josh Berezay detailed. “The second trip he gave himself a little stinger leaving there, kicked the chutes just a little bit, but he really tried his guts out. You can’t ask for more than that.”

Hard Not To Get made his World Finals debut in Round 4. Entering the out with an unridden 9-0 record, Montanha became the first rider to reach the 8 aboard the Vold Rodeo bovine, scored 87.25 points. For his efforts, Hard Not To Get earned a 42.75-point bull score.

Since the launch of the elite Cup Series in 2016, viewers across the country have been able to watch the tour, along with accompanying events from the United States, on the TSN family of channels.

In 2021, however, PBR Canada inked its first two-year deal with the network, making TSN the broadcast home of the organization through 2022.

The multi-year partnership announcement was met with a surge in the ratings. At year’s end, the average viewership of PBR telecasts on TSN increased by 34%.

“TSN has been an integral partner since launching the PBR Canada Cup Series in 2016, and we are excited to remain united with them as we continue to take the sport of bull riding to new heights in Canada,” PBR Canada General Manager Jason Davidson said.

While the 2021 slate of programing on TSN is complete, stay tuned to PBRCanada.com for the announcement of the 2022 airdates in the coming weeks.

Prior to 2021, in PBR Canada history, no bovine athlete had ever twice been crowned the PBR Canada Bull of the Year. However, this past season, Happy Camper achieved what had yet to be done, earning his second-year end honor.

Happy Camper was first crowned the bull of the year in 2018, and after finishing runner-up to the title in both 2019 and 2020, despite battling a hoof injury, 2021 was once again his year.

The 2021 Canadian Global PBR Canada Bull of the Year honor was determined by a bull’s average score when combining his Top 3 outs from the regular season across all levels of competition and his one out at the 2021 PBR Canada National Finals.

During the regular-season, Happy Camper was dominant. He bucked nine times on home soil in 2021, with his top three outs all scored 45 points or more. Happy Camper entered the 2021 PBR Canada National Finals with a 45.17-point average, tied for the No. 1 position with Eno Bucking Bulls’ Gaume Farms Stickin “n” Movin. The duo led Vold Rodeo newcomer and No. 3 Unkle Kranky by 0.34 points back.

Happy Camper’s Top 3 scores were registered in Prince Albert, Saskatchewan in June when he was marked 45.5 points for his 4.13-second buckoff of three-time PBR Canada Champion Aaron Roy, in Cluny, Alberta in July when he was scored 45 points for his 3.09-second trip with 2018 PBR Canada Rookie of the Year Nick Tetz, and in October at the elite Cup Series event in Medicine Hat when Happy Camper bucked to a 45-point score for his 6.09 seconds of work against Jordan Hansen.

“To be in the top two in the last three years and going on four years is pretty exceptional for us,” Berezay said. “Especially bucking under these kinds of guys. The guys who tie their hands in are serious about it. You aren’t showing up at some po-dunk bull riding somewhere and some kid is getting on him and making him look good.”

Once inside Rogers Place, Happy Camper, who had returned to Canada just days prior after bucking twice at the PBR World Finals in Las Vegas, clinched the 2021 honor I the last out of the season. Teaming with 2018 PBR Canada Champion Daylon Swearingen for a monstrous 91.5-point score, Happy Camper earned a 44.5-point score to secure the year-end honor. Happy Camper edged Stickin “n” Movin by a mere 0.125 points.

“He is proving year after year, after year, that he is one of the best bulls this country has seen,” Berezay concluded.

Being crowned a PBR Canada Champion is a goal for almost every Canuck rider. And to win the prestigious honor multiple times is an even rarer feat to achieve.

In 2021, Cody Coverchuk joined to elite contingent of multi-time PBR Canada Champions, which was previously just two-time title holder Zane Lambert and three-time Champion Aaron Roy, as he delivered an impressive come-from-behind surge on the last day of the season to be crowned the Champion.

While Coverchuk briefly held the No. 1 position during the regular season, he entered the 2021 PBR Canada National Finals needing to make up ground, second to the top position by 55.66 points.

However, after a dismal first day of competition, bucked off by Tractorland.ca in 3.31 seconds and Ripped at the Seams in a swifter 1.66 seconds, Coverchuk needed a miracle in Round 3 and the Championship round to keep his title hopes live.

Remaining focused, Coverchuk, reset on Championship Saturday. In a must-ride situation, Coverchuk covered Rico for 83 points in Round 3 to not only punch his ticket to the championship round, but also keep his title hopes alive.

Coverchuk then got word of the bull that would earn or deny him the 2021 PBR Canada Championship, and a smile spread across his face as Finning Lil Shorty’s name was read aloud. A familiar matchup, Coverchuk covered the Flying Four Bucking Bulls’ animal athlete for 85 points during Round 3 o the 2016 PBR Canada National Finals.

Replicating his success, Coverchuk delivered under pressure, reaching the requisite 8 for an impressive 89.5 points to surge to No. 3 on the event leaderboard, clinching the 2021 PBR Canada Championship.

“After I rode that second one, I was back in the locker room pacing around. I honestly had no idea if that was going to be enough,” Coverchuk said of the final outs at the event.

“Every time a guy was getting on a bull, I wanted to see him ride that bull. That is just the way it is in the PBR, the bulls are so rank. On that day, in that situation, I was a bit more nervous with $50,000 on the line. I was trying to make it look like I was playing it cool, trying something, but deep down inside I was freaking out.”

Coverchuk, who earned a career-best $67,343.75 payday, finished the season 23.34 points ahead of runner-up Dakota Buttar, who was sidelined on the final day of the season due to a groin injury.

“Rolling through the year, that is just kind of the game, you get hot and cold for a few shows,” Coverchuk added of his season. “I kept my head down. My dad always told me to let the riding do the talking. You don’t need to talk about how good you are, you can ride, just come and do it.”

There are few sporting venues in Canada, let alone the world, that have such a commanding presence as the state-of-the-art Rogers Place in Edmonton, Alberta.

In 2017, the home of the NHL’s Edmonton Oilers, welcomed the PBR for the first time in history, hosting the inaugural PBR Global Cup.

But following the global event, akin to the Olympics of bull riding, PBR had yet to return to Rogers Place.

However, that all changed in 2021, when Rogers Place played host to the 2021 PBR Canada National Finals.

“All of us riders are super pumped to go back there,” Dakota Buttar said. “Any of us that were a part of the Global Cup that went there a few years ago know it was an absolute blast. I love that building. It is second to none. Maybe only second to T-Mobile Arena in Vegas. We are all fired up to ride there again. I know Jason [Davidson] and the whole crew are going to be putting on a big show.”

But the significance of the 2021 PBR Canada National Finals didn’t end there.

Not only was it the first edition of the year-end event inside the admired venue, but a record $175,000 was on the line, making the 2021 PBR Canada National Finals the richest in history.

“[Roger’s Place is] obviously where our Finals need to be,” 2021 PBR Canada Champion Coverchuk said. “The fans showed up too, Saturday night was packed, and it was rowdy. When Brinson did his thing, asking if you are ready for the PBR, and that place went nuts, I was like yep, this is where we need to be, this is the PBR Canada Finals.”

“It was really nice to be able to compete in a building that is at the top of its class in the world,” two-time PBR Canada Champion Lambert explained. “It’s fancy, it's beautiful, it was great to be able to ride there.”