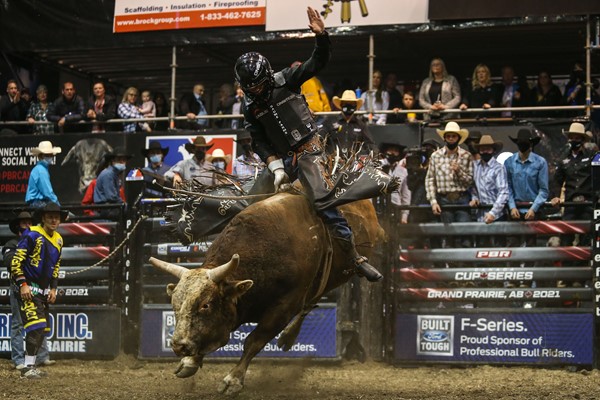 Tanner Eno is one of the fastest rising talents within PBR Canada. Photo: Covy Moore/CovyMoore.com.

The Coronation, Alberta cowboy boasted being the highest-ranked rookie across the two years of competition in the PBR Canada ranks, finishing the 2020 season No. 11 and 2021 No. 19.

Competing against other first-year pros, including the likes of Griffin Smeltzer, Blake Smith, Dawson Shannon and his two traveling partners Ashton Sahli and Tyler Craig, Eno said that he had a bit of luck on his side to be recognized among that class.

“It’s an honor, you only get a chance to earn that one time in your career,” Eno said.

“Like everyone knows, this group of rookies, there are a lot of us. We aren’t just showing up, but we are showing up and winning and meaning it in my opinion. Being the top rookie out of that group means a lot.”

The one-day, two event marathon competition was tough on all the competitors, but Eno showed out with a mammoth ride against Vold Rodeo championship round campaigner VJV Whiskey Hand.

His 87.5-point score put the bull riding community on watch for the now 21-year-old bull rider.

But for Eno, he says the moment that sticks out when looking over the slightly elongated rookie campaign is his first PBR event win – registered in his own backyard.

The second-generation bull rider rode to victory in August 2021 at the Touring Pro Division in Coronation, Alberta. Not only was the tour stop held in his hometown, but it was also an event which Eno had watched his father, Darin, produce for 15 years.

“For sure, this year what stands out is Coronation,” Eno chronicle. “It was a weird year for sure, but not as weird as last year. My highlight is definitely the Coronation win, 100%.”

“The whole week prior to that, myself Ashton and Tyler were setting up steel and things like that. I hauled bulls into the grounds for dad all the way up till about five o’clock on the day of the event. I dropped my last set of bulls and rolled my rigging bag in to get on.

“That's the first time I have been able to ride at it,” Eno continued. “Then to ride at it and win it, it was an experience that means a lot. I remember being little and watching it, as my family has put it on for 15 years, so to get to ride at it was one thing, but to win it is something that is just an honour.”

And what was the key to Eno’s success? He credits the class of rookies he competed against, and even more so the riders who he calls his closest friends.

“Ashton and Tyler are my two best friends,” Eno began. “If you see me, but don’t see them, they are probably just behind me somewhere. We are a tight knit group. We help each other out but we give it to each other as well. When we show up to a bull riding, we are betting on ourselves against each other.”

“We are always watching old videos on the road -- Cody Custer, Cody Lambert, Jim Sharp. That group of guys, they gambled on everything those guys, and that is our mentality. We are gambling on who buys supper every supper. We are there to beat each other, but at the end of the day, if I am getting on, they are the ones helping me on and screaming and hollering, and vice versa.

There is no question that the trio of travelling partners want to win each time, evidenced by the work ethic within the sport and the hours put in leading up to event day.

During much of the summer months, many of the then PBR Canada rookies, and some of the younger talent, were staying with the Eno family, getting on practice bulls daily. Eno claims that he must have had a stroke of luck to be recognized as a top rookie, as any of those guys could have done it too.

“What those guys did this year, Tyler had an awesome year, and Ashton. Damn I don’t know how many times that guy was in the Top 5 this year. He rode his bulls, all of us did. Even Griffin, that is a guy that is hard to beat every time. He is a gamer, and he shows up to win every time.

“That is what I think is so cool, this group of rookies, I think personally that we have all been watching the old school guys and learning from their mentality, Eno explained. “We are all buddies and pull for each other, but you have to be there to win for yourself. You can’t be there to take part.”

“At the house every day, bucking practice bulls everyday through that summer stretch. We would hang out at the house between bull ridings, mess around. We all love bull riding and I guarantee that the only reason I ended up with the top rookie honors is a bit of luck, cause any of those guys could have ended up on top.”

When asked if there is a future PBR Canada Championship in himself or anyone in this rookie class, Eno kept it simple.

“I think all of us are future Canadian champions.”