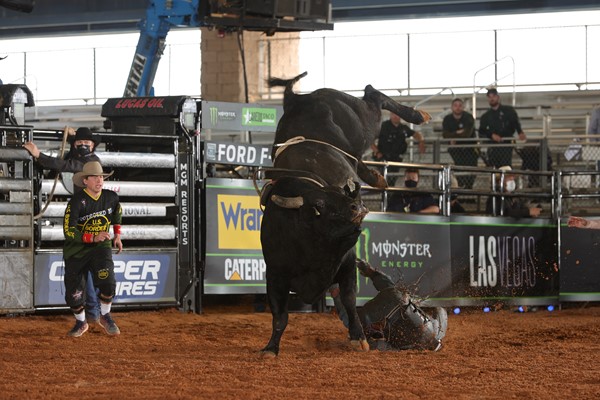 Blackfoot Nation is one of two bulls from Flying High Rodeo Co. in the United States for outs on the elite Unleash The Beast. Photo: Andy Watson/Bull Stock Media.

AIRDRIE, Alberta – The PBR World Finals is a place familiar to Flying High Rodeo Co.’s Lorne High. With standouts that have made their way to the elite Unleash the Beast such as Blue Stone, the stock contractor from Elnora, Alberta is no stranger to seeing his bovine athletes on television.

However, after a slow season in Canada in 2020, and an expected delay in 2021 events, High has spent a bit more getting his bulls shown off in the United States.

After starting 2020 on home soil, Flying High Rodeo Company’s Lil Loco and Blackfoot Nation made the trek to Arcadia and Okeechobee, Florida to continue to show off the prowess from the small Canuck outfit.

“They were up here ready to go to work last year,” High began. “They went to Calgary and Lethbridge, and the deal in July that Jason Davidson put on. Keeping them around and in shape hoping there would be something else to do was the plan. I was hoping they would go to PBR Canada Finals, but they moved it so it didn’t work out there.”

“Bulls age in a real hurry from four years old to five year old. I sent them down to Jeremy Walker and Paradigm Bucking Bulls cause I am not sure what sort of work they would see up here this season.”

Accompanying his two elite tour buckers, High also sent another liner load of calves down south to a separate contractor for added training and additional opportunities for competition. High is confident in his stock showing off their skills down south will see someone wanting to get their name on them.

"The other bulls have to get down there and get seen, they are not sold,” High detailed. “We have kept options for all this. If they don’t see any offers, Jeremy Walker is happy to haul them and buck them, and hopefully they can make it to the Finals. I do want to find a new owner for them. That is my business.”

Lil Loco and Blackfoot Nation have both shown they can match up with the competition on the premier Unleash The Beast, bucking off both riders that have attempted them. Blackfoot Nation even tallied a strong 44-point bull score in Arcadia against Mauricio Moreira.

“I was happy with their trips. They had made the trip right from here straight from December. They hadn’t been down there that long, and they really were just how they were up here. They are just solid good draws. I hope their maturity as five year olds will show through in their strength.”

High added that while those two are already being chosen to buck at Unleash The Beast events, he has one more bull that doesn’t have enough trips on video to get the nod for the big tour that is down with Walker and Paradigm Bucking Bulls – Busta Rhymes.

“The one I am really high on that they haven’t seen yet, Busta Rhymes. I don’t want to jinx him, but he is the one that has the extra possibility of being something special,” High said.

With a deep operation, High said he has left a good chunk of his bull power at home, but admitted the operation is certainly looking southward a bit more than it has in the past.

“My thing isn’t trying to compete with contractors, I try and build a resume for my bulls to get them on a bigger stage,” High concluded. “They don’t all make the top end, and there are lots of other PRCA contractors and other guys that can always use those bulls. That is what is keeping us going. We have been in the ABBI since it started and there are a lot of records of my cattle. Lots of folks use my stuff for breeding and that sort of stuff helps keep our bloodlines relevant all over North America.”