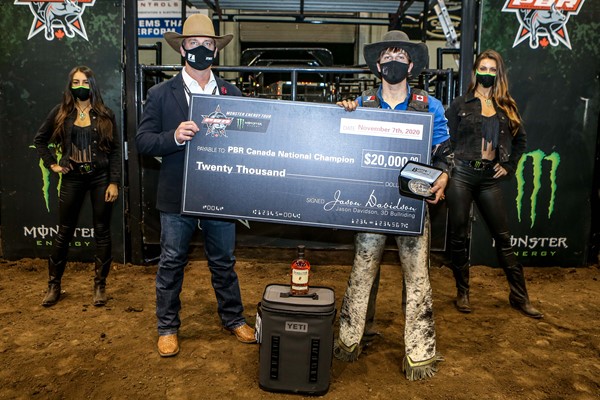 AIRDRIE, Alberta – There is no question that 2020 was a significant year for professional sports.

But for PBR Canada General Manager Jason Davidson, he says despite a tough year where the sport slowed down, hosting made-for-television events and being the first sport back to action safely and responsibly are his highlights of the year.

“No question the greatest accomplishment of 2020 was how the entire PBR Canada Team came together to deliver a season for our contestants, contractors, staff sponsors, and most of all our PBR fans,” Davidson said. “We moved mountains in 2020, and we will move them again in 2021.”

“The fact that we could even pull off the made-for-television event in Lethbridge at ENMAX Centre was a highlight. PBR Canada was the first professional sporting event to come back and deliver a show to an audience here in Canada. The work PBR promoters like Tanner Byrne, Nansen Vold, and Dave Anderson put in was also a significant accomplishment in 2020. It’s partners like these that will give PBR Canada the momentum in 2021 to keep the traditions of the western lifestyle alive in our country.”

When the dust settled on the 2020 season, PBR Canada held just 10 events across all competition levels. After the campaign began with sold-out shows in the winter, the league quickly pivoted to made-for-television and limited capacity shows. However, despite the varying formats, one thing was consistent throughout 2020 – no one was more dominant than Dakota Buttar as the Saskatchewan man was crowned the year’s PBR Canada Champion and earning the coveted $20,000 bonus.

“Focus is one word that sums up Dakota’s season,” Davidson said. “He started it off with wins in Lethbridge and Calgary pre-pandemic, and he didn’t waiver when events started back up in July.

“Dakota rode eleven of eleven bulls to start the season to tie his own record for continuous qualified rides in Canada and finished the season with an incredible 72 percent riding percentage. Those stats are incredible, and in normal circumstances, I think we would have seen Dakota cross the $100,000 earnings mark for the 2020 season.”

Having already earned a pair of rodeo bull riding Canadian Championships, 28-year-old Buttar is building a hall of fame resume. What the future holds, however, for Buttar, as well as the rest of the PBR Canada field, remains unknown.

"Dakota is in his prime right now as a PBR Bull Rider. What becomes a challenge for riders like Buttar, Zane Lambert, and Aaron Roy is that age is the enemy in prolonging their professional careers as bull riders,” Davidson, a former professional bullfighter himself, added.

“They are not able to get on bulls 10 months of the year as we pivot our schedule to accommodate this virus. Like any professional sport, and not to make this sound like a cliché, but practice makes perfect. It will be very interesting to see how this spring and summer sort out as far as Touring Pro Division events as we have pivoted to rescheduling all of our PBR Canada Cup events to later in the season.”

The PBR Canada stock contractors helped show the western sports industry what passion looks like. With bucking bulls that needed to be fed and minimal events to earn at, the contractors in Canada showed that they are the backbone of the sport and its biggest cheerleaders.

“PBR Canada’s stock producers have had their backs to the wall for 10 months now,” Davidson began. “Like the riders, these bulls need to be going to events, and the producers need the gate money to cover costs like feed, shelter, and transportation. This is my biggest concern in 2021. If we cannot get some Touring Pro Division events up and running, it does not help the development of our livestock.

“The PBR bucking bulls are as important to the development of our business as Dakota Buttar, Jacob Gardner, and Jared Parsonage are. Our team will continue to develop programs that support our PBR stock contractors thru these trying times.”

In 2020, Nansen and Jen Vold were crowned the Stock Contractors of the Year for a fifth consecutive season. Davidson says they are deserving of the award every time they have been in the running, but with a year like this past, there are a few others that were also deserving of the honor.

“I do not envy the bull riders having to pick a Stock Contractor of the Year and singling out one producer each year. In my opinion, we could give it to four or five stock contractors in a particular season,” Davidson said.

“When it comes to the Vold family, I suppose it comes down to the sheer number. No other PBR stock contractor is all in on the bucking bull business like Nansen and Jen Vold.  It is their life, it is their kid’s life, and they do it right.  They have raised some of the greatest animal athletes the PBR has ever had the pleasure to promote, not only in Canada but on the world stage as well.”

This past year saw contractors, riders, production professionals coming together all over the country to put on responsibly-run practice pens, jackpots, and smaller PBR sanctioned bull ridings.

From Coutts, Alberta, to Prince Albert, Saskatchewan, the industry rallied to keep some semblance of the western sports lifestyle.

“I wasn’t surprised with any of this, to be candid. It’s not in our DNA to roll over and give up on this industry,” Davidson added.

“For many of these individuals this is their lifestyle; it’s all they know. That is why it is so important that PBR Canada does whatever we can to support their ideas and ventures.”

“I attended all of Tanner Byrne’s events this year and helped with some of the details he didn’t have the experience with in event production. I expect Tanner will now be able to put on a handful of events in 2021 with the knowledge he gained in 2020. I have spoken to Slim Wilson on his events for 2021 as well, and PBR Canada will be all ears if other venues wish to put the work in to bring some entertainment to their community.

“PBR Canada has some ideas for 2021 that will create new opportunities by plugging back into our western roots.”

As for the PBR Canada Cup Series, Davidson says the calendar will be full in the latter half of the year.

“As I said previously, the PBR Canada team is focused on the PBR Canada Cup Series event schedule pivoting to the third and fourth quarters.  We hope this time will allow the rules being enforced during this pandemic to relax. We have an exciting new venue to announce, but I cannot disclose that at this point.  PBR Canada will do what we need to do to be sure and deliver our product to all our TSN viewers in 2021.”